The Shape of Things (Okay, Me)

The Shape of Things (Okay, Me)

Time to crank up the metabolism.
If, like me, you spent your entire winter and spring inside and stationary, you are, also like me, resembling a Shmoo. 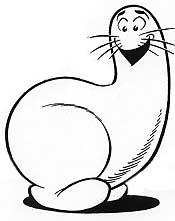 (Dramatic recreation of author)
My wife, always referred online as The Countess*, is a teacher and has taken graduate courses online through WCU since last spring, and she has compiled her recertification portfolio for National Board of Teachers. She comes home from nurturing young minds, grabs her laptop, and vanishes for hours. It’s the equivalent of a second job. It’s been murder. She emerges from her office each night looking like she was unplugged from The Matrix.
I, meanwhile, have minded our son, always referred online as The Deputy**. He’s three. Adorable and brilliant. My past six months and beyond have consisted of me shoving him outside between daily rainstorms to wear him out for a decent bedtime. Then we got ice and snow and rain that each lasted longer than Wimbledon. We’ve been inside a lot. Thank God for Netflix. We powered through Star Wars movies and cartoons. We memorized the Captain Huggyface Dance from Word Girl. We put up a play tent in the living room so he can hide and read in there to give the TV a rest. While he hunkered down for graham crackers and Clone Wars, I polished my comic books for a trade collection.
This required mirroring The Countess and playing the staring game with my own laptop for hundreds of pages. It’s horribly technical stuff. I’ll spare you the details***. I stood at the kitchen counter, keeping one eye on the artwork and another on the boy. The lone benefit of having a lazy eye: This is physically possible.
Now it’s June, and the weather is stabilizing (kinda, sorta). We can step outside, squinting and hunched over like Gollum, and stretch our enfeebled legs. Now he has the freakish metabolism of a spider; he can eat half his body weight and remain slender. I lost that super power about a decade ago, and I had to exercise to maintain my market value. Before The Deputy was born, I ran almost every day. Now, I’m lucky to run once a month. But The Countess and The Deputy had a daycare birthday party this Saturday, leaving me with a few hours to kill. So I ran. Not far, not after all this time away. Just a few miles to see what kind of power I had in my lungs and legs. Turns out, not much. That’s OK. It’s a start. I knew I had to work back up to my old ways. I also re-evaluated my snacks and realized I was gobbling the equivalent of a salt lick every week. That had to change. I store sodium with the grace of a hibernating bear.
I also knew that the optimistic forecast would let me tackle the next phase of the garden. I’ve had a backyard garden for about eight years now. Nothing fancy. Some tomatoes, some potatoes, some squash. Enough to provide some side dishes for our meals. This year’s garden started a little late, thanks to a very stubborn frost, and the potatoes are just getting big enough to make cages. My hope is that they can grow vertically and make us rich when the world collapses as predicted by my in-laws’ emails and tubers become the new currency.
Using old chicken wire and posts I once used for a garden border, I made stable cylinders for the potatoes to go inside. I then filled them about a third of the way with a mixture of compost, dry manure, plant food, and dirt. And I tell you this only to describe my Sunday exercise.
Gardening is toil. You gouge the earth. You wrench from it and shove into it. You fight it like a UFC champion. My hands are all kinds of beat up. I’m typing with many a Band-Aid. (You should wear gloves. You should go eat a bug.)
That was two hours of the shoveling and the hauling and the hauling and the shoveling. But I staggered back inside the house satisfied that I had cracked the topsoil also of my fallow muscles. They hurt today. A lot. **** But I got outside. I worked up a sweat and things got did.
Hopefully I can keep up the momentum. Because, between you and me and the sleeping Deputy on the couch, I have to fit into a certain costume in September.

* It’s a long story, so here’s the short version: Her online nickname is The Countess.
** It’s not a long story: I’m so flabbergasted at saying aloud “I have a son” that I find it much easier to say “I have a deputy.” I can’t wait for him to get old enough to wear pants that require belts so we can get matching badge buckles. Until then we have to rely on matching suits like Big Enos and Little Enos. 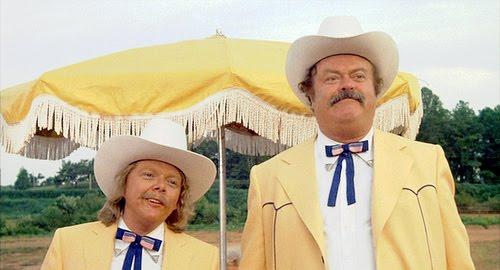 (I'm the tall one.)
*** Sample detail: Replace a bad comic panel with a new one. Draw the new panel. Ink it. Scan it. Tweak it in Photoshop. Place it over the old panel. Re-letter that panel. Replace the page in the layout. Do this for about 140 pages. Drink drink drink.
**** A LOT. Drink drink drink.