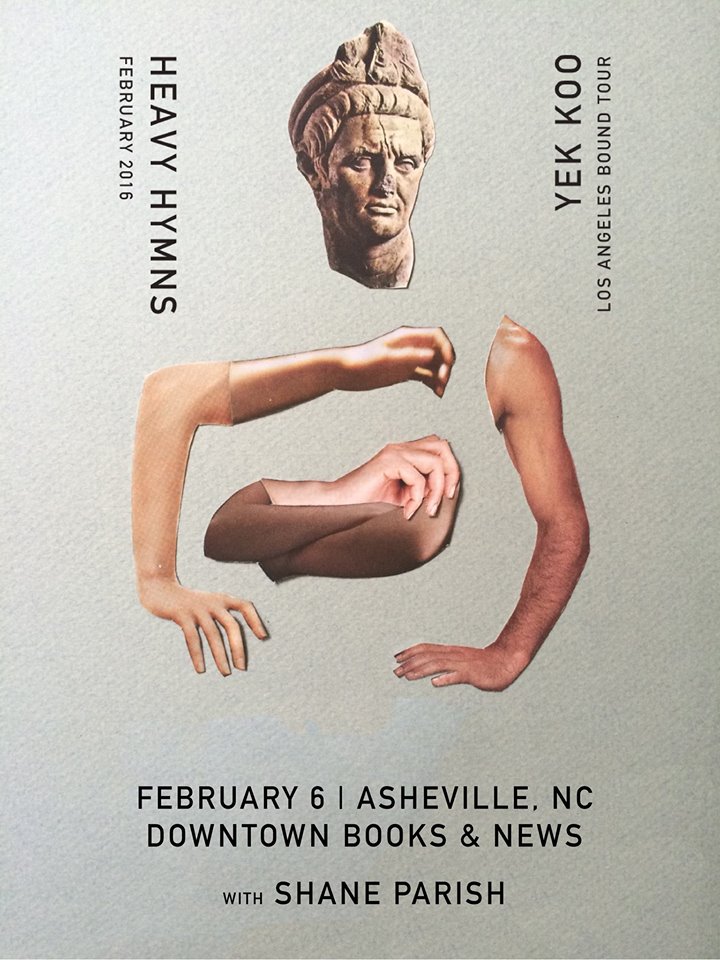 This Saturday (2/6) at 7:30 pm, Downtown Books & News hosts an experimental music show featuring the untameable and eclectic talents of Yek Koo, Heavy Hymns, and Shane Parish. DBN's last show was an especially exciting event for Asheville's experimental scene, and they have been consistently setting the bar high for the avant garde in Asheville.

Yek Koo joins the line-up from New York. Yek Koo is the visual and performing artist Helga Fassonaki, a member of the duo Metal Rouge. As Yek Koo, she creates strange, hypnotic blends of minimal instrumentation, vocals, and noise. Distortion bends the sounds, and their sources are sometimes almost unrecognizable. Songs are textured, bringining together wails, screeches, mutd trumpets, loops, and movement. While the music is often stripped down, the effect is intense.

Heavy Hymns, also hailing from New York, is Michael Hentz, who creates beautiful experimental music that weaves the analog and the digital, the musical and the seemingly random, into a tapestry that is more than the sum of its parts. There's an element of mysticism in the haunting music. Hentz is also a remarkable artist (the poster image for the show--also the feature image here--is his).

Local artist and musician Shane Parish, a member of Aleuchatistas, has an eclectic approach to the guitar that is broad yet deep, enabling him to make music in a variety of different styles. In Aleuchatistas, he creates songs that are defined by their musical precision and their embrace of free-form play and creativity. There's also an element of social awareness and engagement present in the music, which looks back to its influences while envisioning a brighter tomorrow.

Music begins at 7:30. Donations are lovingly accepted and there is beer and snackage for purchase. Facebook event here.