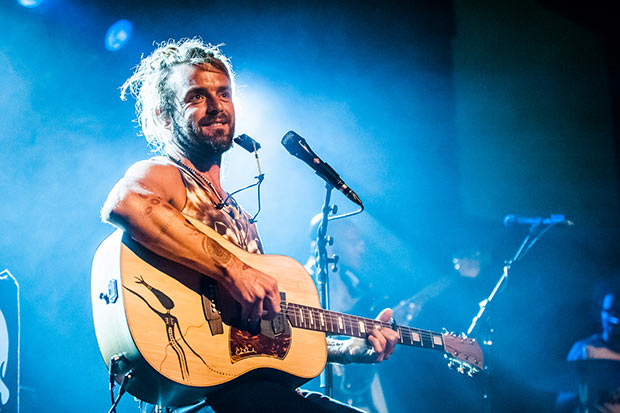 The arrival of summer brought with it the arrival of two of Australia's finest musicians to the Orange Peel for an evening of high energy, immense talent, and infectious spiritual consciousness.  Though the night truly belonged to headliner multi-instrumentalist, indigenous peoples activist, and lover of Mother Earth, Xavier Rudd, I would be remiss in leaving out a mention of his opener, fellow Aussie and surfing buddy, Ash Grunwald.  I've seen my fair share of gigs at the Peel, and this one certainly ranks up there with the absolute best of them, from start to finish.
Got the blues? Then, Ash Grunwald had your remedy, with a solid solo sit-down performance, featuring a selection of his original compositions, with one or two covers thrown in, including a slow but powerful rendition of Robert Johnson's 1930s blues classic, "Crossroads". This was my first exposure to Grunwald, but it certainly won't be my last.  In a genre where it can be difficult to differentiate yourself, Grunwald manages to set himself apart with his high-octane electric guitar work, supported by three foot pedals to provide a touch of percussion, highlighted by a vibrant persona that surely won over a few new fans.
Having said that, this Summer Solstice gig was about Xavier Rudd.  Known for his "one man band" capabilities, and his super-human knack for simultaneously playing lap guitar, didgeridoo, kick drum, percussion and harmonica, while singing when not busy with the mouth harp or didge, this night brought a trimmed down stage set-up for Rudd -- something that I have not seen in the half-dozen or so times I've caught his gigs.  Gone from the stage were his vast percussive instrumentation (apart from a foot pad that provided a subtle electronic kick drum), and only one didgeridoo was on set at any given time (as opposed to the three that usually branch out in front of him).  This absence of "clutter", for lack of a better word, allowed the audience to actually see the man play guitar, and to see and feel his body language.  More importantly, compared to other times I've seen Xavier, he seemed far more comfortable on stage, not being burduned by the surround-sound instrumentation, while happily delegating musical accompaniment to his bassist and drummer (who were both world class artists, by the way).  I was a little surprised that Rudd's bud Ash didn't join him on stage at some point, but it didn't happen.
When all was said and done, Xavier Rudd played for nearly two-and-a-half hours, taking the Peel crowd on a musical and spiritual journey spanning most of his album library, while sharing his creative energy, and genuine passion for life and song.  Though I would probably say this about many artists who pass through town, there is a perfect match between what Xavier Rudd offers, and what Ashevillians yearn for -- awe-inspiring creative talent integrated with a connectedness to his fellow man, and to the planet.  What more could we ask for?
MORE XAVIER RUDD CONCERT PHOTOS HERE