From Wince to Warmth – A Review of Souvenir: A Fantasia on the Life of Florence Foster Jenkins at NC Stage

From Wince to Warmth – A Review of Souvenir: A Fantasia on the Life of Florence Foster Jenkins at NC Stage

Souvenir: A Fantasia on the Life of Florence Foster Jenkins at NC Stage

The success of the recent film about Florence Foster Jenkins, portrayed by Meryl Streep no less, brought the obscure name into modern-day public consciousness. However, Souvenir: A Fantasia on the Life of Florence Foster Jenkins predates the movie and is the current production at NC Stage. For those not already familiar with Florence’s story, she rose to unlikely stardom as a singer and ultimately somehow sold out Carnegie Hall in 1944 despite her complete and utter lack of talent. Somehow, Florence was completely oblivious to the total mediocrity of her singing and her butchery of beloved songs. Her painful renditions are so bad that audiences seemed to flock to her to enjoy the schadenfreude aspect and have a laugh at Jenkins’ expense—a joke that everyone seemed to be in on except the clueless Jenkins.

The play focuses on the working and sometimes strained relationship of just two characters and contains only two actors. Cosmé McMoon is our storyteller and Florence’s often reluctant accompanist played by Jono Mainelli. Jono actually plays the piano during all the show’s musical numbers. Callan White commands the stage with a superb job as the clueless Florence Foster Jenkins. White’s performance makes Florence sympathetic by thoroughly embodying her blind enthusiasm and shrill tone-deaf vocalizations. Much of the humor throughout the play is built on Florence’s active delusion as she intimates with Cosmé about the extraordinary gift of her talent. Cosmé often speaks directly to the audience and we feel his pain and inner conflict. She is his employer and he has to handle her with care by avoiding stating the obvious about her deficit of abilities. Poor Florence couldn’t carry a tune in a bucket, as the old saying goes, and he has to keep from bursting her bubble and damaging her ego.

There are scant details about either of their personal lives in the play, which is apparently more prevalent in the aforementioned biopic for those wishing to delve deeper. I don’t want spoil the third act of Souvenir, but there are some real show-stoppers during a medley of songs in a condensed reenactment of Florence at Carnegie Hall (featuring a series of outlandish outfits). We reach a finale and denouement that leaves us with feelings of tenderness for both characters. 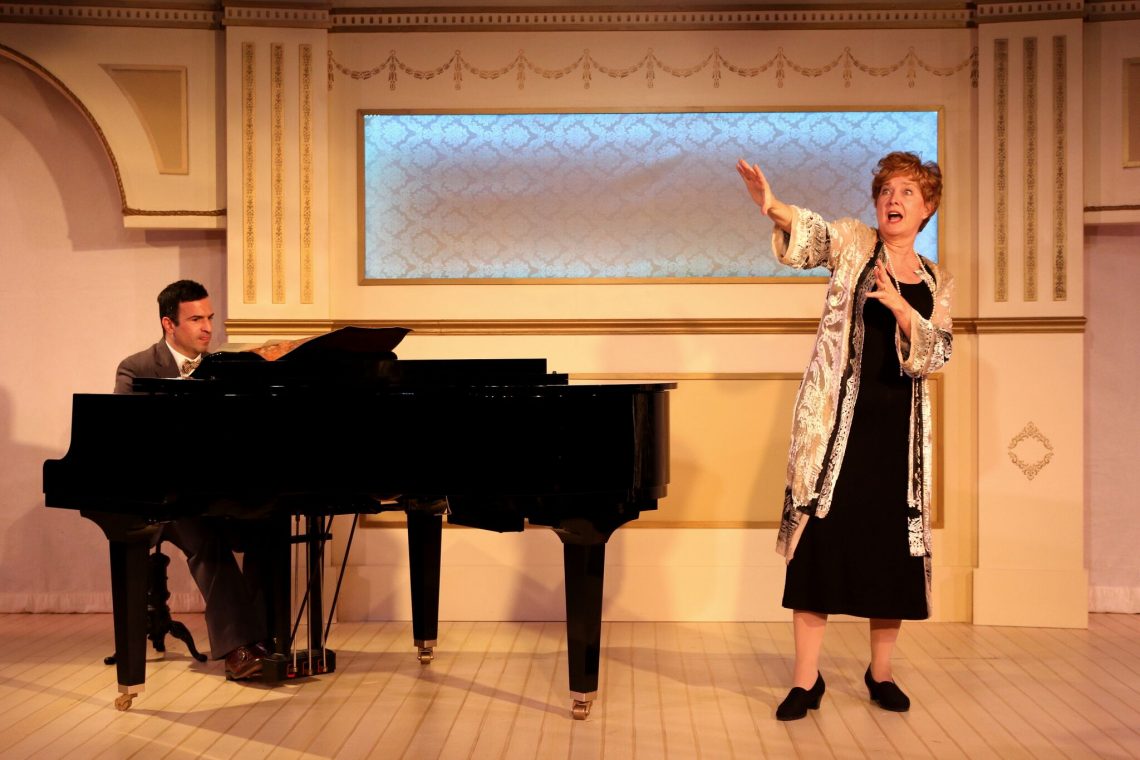