Who is Behind the Petition to Un-Chain Downtown?

Who is Behind the Petition to Un-Chain Downtown? 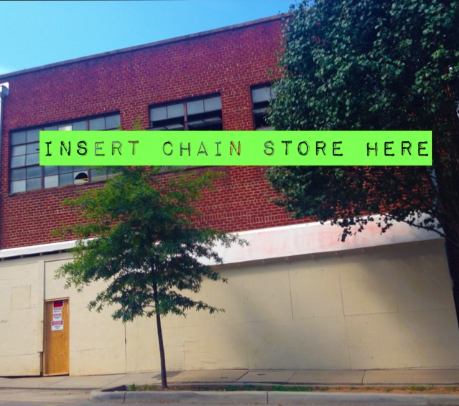 In case you've missed it, there's an Anthropologie coming to downtown Asheville and some people are not happy about it. Anthropologie is an international chain of stores featuring high-end women's clothing, accessories, home decor, and other lifestyle items, and will soon open its doors here on Lexington Avenue.
The store will be located smack-dab among the many independent stores, boutiques, bars and restaurants that have helped create and make downtown Asheville the unique place that so many want to (try to) live in, visit, and write about. This has been cause for concern for not only business owners but for a wide range of community members fearing more rent increases, unfettered corporate development in downtown and, a continuing, challenging identify crisis in a city so many of us hold dear.
None of this will come as a surprise to anyone who remembers the uproar over the opening of another chain store in the downtown hood – Anthro's parent company Urban Outfitters – which opened on the corner of Haywood and College streets about 5 years ago. The store replaced and renovated the former CVS location, which was something of an eyesore but also provided some basic goods that were otherwise hard to find downtown.
Equally unsurprising is the fact that Asheville people want to try and have a voice in how their city evolves. Enter Rebecca Hecht, owner of Adorn Salon and Boutique on College Street, who’s followed these issues for a long time and recently decided to start a petition urging the city to "regulate or place a moratorium on chain and formula stores in downtown Asheville."
With the media attention and grassroots efforts that the campaign has attracted, the petition is currently about 1,200 shy of reaching 5,000 signatures.
I asked Rebecca to tell us more about her history and why she is leading this crusade. We are also curious to know how you feel as well.

Ayana Dusenberry: Rebecca, you've been an Asheville resident, business owner, and very active member of the downtown community for a long time. Can you tell us about your history with Asheville and how your business came about?
Rebecca Hecht: I moved to Asheville 20 years ago with a traveling band of hippies. All of my worldly possessions fit in a backpack. I spent my first night in Asheville on the rooftop of the Kress Building (abandoned and boarded up at the time), which is across the street from Adorn's current location. I really loved this city from the first day I was here.
After spending a few years in Europe as a teen (I grew up in a military family), I had a real appreciation for the history and architecture downtown. Even though everything was pretty much boarded up, I could really see the potential the city held.
Shortly after settling in, my friends and I started doing a soup kitchen 3 days a week – Asheville inspired me to get involved and contribute. After several years of working for other small businesses, I decided I wanted to try running my own storefront. I had been working at a downtown salon, and thought, "I can do this."
I found an empty storefront on Lexington and started my own place. Shortly after, I started the Lexington Avenue Merchants Association in order to advocate for our little neighborhood within downtown. A couple of years later, I was asked to join the Asheville Downtown Association, and subsequently applied for a position on the Downtown Commission. I have the belief that if you want to change the world, you can start right in your backyard and make an impact.

Adorn Salon and Boutique (center) on College Street, downtown Asheville
Ayana: Although Adorn has moved locations since you first opened, it has remained one of the staple downtown businesses despite all the flux over the past decade. What have been the major challenges you've faced as a business owner and what do you feel have been some of the more impactful changes to downtown through the years?
Rebecca: One of the main challenges, which all businesses face everywhere, has been the rapid rent increase, raising up by at least $1/square foot per year in the past 5 years. Some landlords are reluctant to sign long term leases (over 3-5 years in some cases) because they want to keep their rents at market value, but this doesn't create a secure environment for a small business.
When I relocated from Lexington to College Street, it felt like a risk, because there wasn't a lot of retail along that stretch, but now there is a lot more foot traffic, and it serves as a connector from the west side of downtown to the center and east. We feel very fortunate for all of the growth Asheville is experiencing.
I think the other side of that coin that creates a challenge is the pace of that growth. Parking availability becomes a bigger problem with each season that passes, and we worry that is discouraging to our regulars – the local community. There are also businesses who have suffered from lengthy construction processes, even damage to their buildings, forcing them to close. I think there could be more of a balance in guiding all of this growth – nurturing smart development, while protecting small businesses that are the foundation of our unique identity.

Ayana: You've obviously been super committed to being and staying involved with organizations striving to, among other things, promote and protect downtown businesses. How has your involvement shaped your perspective on and goals for the downtown economy?
Rebecca: My friend Joe says laws are like sausages, it is better to not see them being made. And sometimes, that is my perspective on getting involved. It is like pulling at one string to solve a problem, and not only does the sweater start to unravel, but suddenly there are all of these ugly polyester strings that pop out and need to be unraveled too.
Most of the time, though, I am impressed at how much the city tries to reach out for citizen involvement. I'm not sure the public is always informed of those opportunities as well as they should be, but it's also our responsibility as citizens to know what we are concerned about and get involved. You really have no leg to stand on to complain about something if you aren't getting involved.
Another amazing thing about participating is the people of Asheville, their love for this city and their passion for making it a better place, from city staff, to volunteers, residents, shop owners, restaurateurs, really everyone.

Ayana: You started a petition to keep businesses independent in downtown Asheville, that has gotten a lot of attention and signatures over the past couple months. You said earlier that in order to change the world, you can start in your own backyard and make an impact. In a perfect world, what would be the outcome of your efforts?
Rebecca: In a perfect world, we would celebrate our local businesses, including those who started here and have found success by expanding to other communities. Downtown would continue to be vibrant and unique, maintain and evolve our character and appeal with a balanced representation of a thriving economy that provides prosperity for the community here while delivering a one of a kind experience for our guests.

Ayana: What do you say to people who either don't mind or even love the idea of Anthropologie or other chain/formula stores coming to downtown and who feel that adding such businesses into the mix causes more interest to downtown, thus potentially more costumers for all?
Rebecca: I think maybe there is a place for those businesses in other areas of Asheville that have better parking and other infrastructure to support those types of businesses. I'm sure that the people who are excited for Anthropologie would be happy to shop there wherever it is located in town. There may be neighborhoods that needs and would welcome an anchor store.
Again, I think there is a balance – the growth of other cities similar to ours tell the same story over and over – once a few multinational formula stores found footing in unique downtowns, they took over, and destroyed the local business base.
I think we need to know what our vision of downtown is as a community and try to put measures into place to work towards those goals before large corporations come in and shape our future for us.