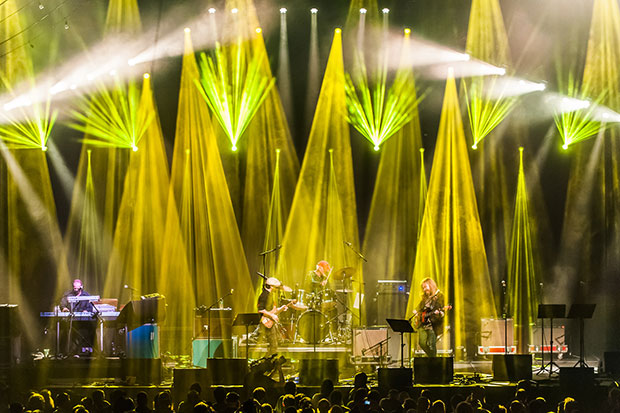 When I first saw the line-up for the 26th edition of the Warren Haynes Christmas Jam, I must admit that I wasn't overly enthusiastic about it.
Given that my previous Jam in 2012 was star-studded, featuring the likes of the Avett Brothers and Sheryl Crow just to name a couple, it was hard to get excited about what was on offer in 2014, especially after a late cancellation by Vince Gill who I was really looking forward to seeing. Quite frankly, there weren't any "big" names on the bill that you could identify as head-liner caliber acts for such a mega-event. Sure, there were notable artists in store like Bill Kreutzmann (formerly of the Grateful Dead) and Jason Isbell (formerly of the Drive-by Truckers), not to mention Asheville's own American Idol champion, Caleb Johnson, but there was a lack of a "wow factor" for me. Of course, one must consider that Christmas Jam is ultimately about giving back (i.e., raising money for Habitat for Humanity), but it was difficult to set that aside, and enter the US Cellular Center with high expectations about the performances that were about to unfold. Or, so I thought.
In the end, I could not have been more wrong about my prejudging of the lineup and the pending performances. It was bad-ass.
Not only did all but one act shatter any expectations that I had, but I left the arena feeling energized and excited, and grateful that I was able to experience such a captivating event in a small city such as Asheville. Despite a less-than-stellar lineup, Warren Haynes did it again, and pulled off one of the best music events of 2014, while raising thousands and thousands of dollars for a noble cause, the Asheville Area Habitat for Humanity.
Highlights of the evening included Warren and Caleb dueting "Soulshine", to a high-energy set by little-known (little known to me, anyway) band called The Revivalists, to a full set of Neil Young covers by Gov't Mule (with Jackie Greene joining in, and adding quite a dimension to the show), to the close-out with Billy & The Kids, featuring by far the most spectacular stage lighting that I have ever seen and photographed (oh, what I would give to shoot in such lighting for all gigs!). Even the house band, Love Canon (renamed Love Canon Rangers for the evening due to a couple members of the Steep Canyon Rangers joinging in) kept everyone gainfully entertained between sets with bluegrass renditions of popular hits from the 1980s. Speaking of cover songs, a large percentage of the songs of Xmas Jam 26 were covers, ranging from "Baba O'Reilly" (by The Who, as performed by The Revivalists), to the aforementioned Neil Young set, to a Led Zep selection, to a few Marshall Tucker Band cuts, to the night closing out with jams of "While My Guitar Gently Weeps" and "The Night They Drove Old Dixie Down". Perhaps it was the wide array of cover tunes that allowed me to get into the music more than expected. Or, perhaps, it was just a gathering of some incredible musicians, all having a good time, while treating the crowd to an eight-hour music marathon.
What was the one act that disappointed me, you ask? Hard Working Americans. To be honest, based on what I had heard of them on WNCW in the weeks leading up to the Jam, my expectations were very low. So, I wasn't too surprised when Todd Snider's Mick-Jagger-wanna-be immitation fell short, and certainly didn't impress me. At all. Personally, I think that he should stick to solo performances with his acoustic guitar, and simply do what he does best -- tell stories through his music. Sure, the Hard Working Americans "supergroup" is an interesting experiment, but I'm not so sure it's going to have legs. But, I could be wrong. I've been wrong before when it comes to music, as admitted in this review!
I'm now left in joyful anticipation of what Mr. Haynes will have in store for us come December 2015. I've learned my lesson not to draw any conclusions before the house lights go out, the stage lights go on, and the amplifiers are cranked up. Asheville should be very proud of Warren Haynes, not just for what he has accoplished as a musician, but for what he means to the community, and what he does to give back to that community year-in and year-out.
Bring on Christmas Jam 27, Warren. I'll be waiting with great anticipation.
Additional Christmas Jam 26 photos can be found on the Front Row Focus website.
FOLLOW FRONT ROW FOCUS ON FACEBOOK