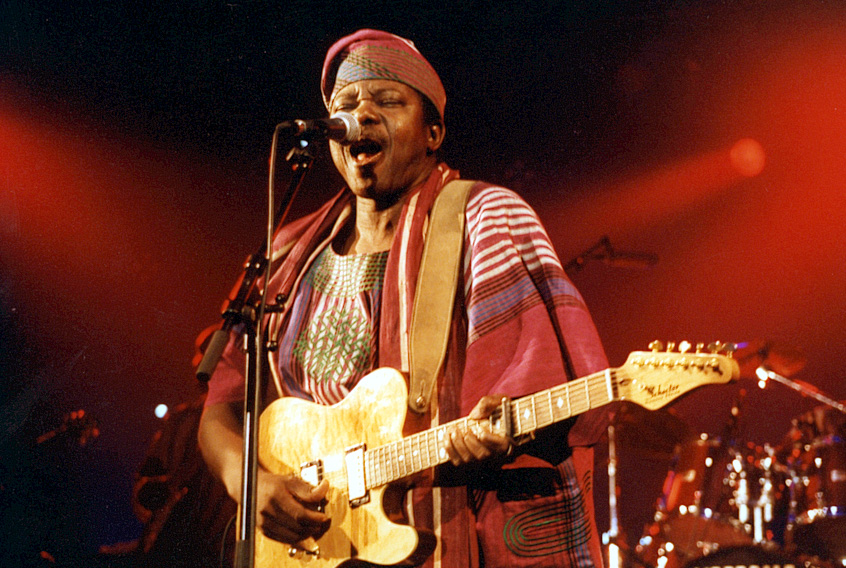 Today we deeply regret to report that, as result of a worldwide computer system breakdown within The Department of State's Bureau of Consular Affairs, US Consulates have been unable to issue visas. The State Department has provided no specific timeline as to when this problem will be corrected. Once it is fixed, priority will be given to medical and humanitarian cases only. Performers and artists will not be given priority.  This is a worldwide problem, not specific to only a few consulates, and affecting both immigrant and non-immigrant processing. Due to the uncertainty surrounding this unfortunate situation, we are forced to announce the cancellation of King Sunny Ade's remaining tour dates in both the US and Canada.

For those of us who are really into African music, this is like Santana or Jimmy Page coming to town. He is an international legend, up there with all of the African greats, like Fela Kuti, Manu Dibango, Oumou Sangare, Youssou N'Dour, Oliver Mtukudzi, and so many others. Adé​ is the "godfather of juju music", a Nigerian style that evolved from traditional Yoruba drumming, with the talking drum being the primary instrument. Juju music did not derive its name from juju, which "is a form of magic and the use of magic objects or witchcraft common in West Africa, Haiti, Cuba and other South American nations." (Thanks Wikipedia).

Juju music does have some magical roots, though. It was the style of music used by the Yoruba people to invoke the powers of their gods, to praise their gods, and gain the favor of the gods. It is still played today in many forms, and used to praise guests of honor during ceremonies. If you like what a performer is playing, throw some cash at him or stick it to his head! This is how you show the perfomer that you really love what he/she is playing.

Check out King Sunny Adé​'s 1982 record "Juju Music" to hear his breakout release on Island Records. If you're saying to yourself "Island Records- that sounds familiar," yeah, that was Bob Marley's label. The New York Times, which described the album in 1982 as "the year's freshest dance-music album",[4] credited it in 1990 with having launched the "World Beat movement in the United States".[5] In its review, Allmusic indicates that the album gave Adé "unprecedented exposure on the Western market and introduced a slew of music lovers to the sounds of Afro-pop", concluding that it "should not only be the first-disc choice for Ade newcomers, but for the Afro-pop curious as well." (Thanks again Wiki!)

It's a great record, for sure, but don't miss his two follow-up records "Synchro System" and "Aura," with the latter featuring a guest appearance by Stevie Wonder on harmonica (video attached).

To sum it all up, DON'T MISS THIS SHOW! This is a rare treat having King Sunny Adé​  in Asheville. Sure, it's $20, but it's well worth it. AND, **shameless plug alert**, local afropop/zouglou band Zansa will be opening the show!