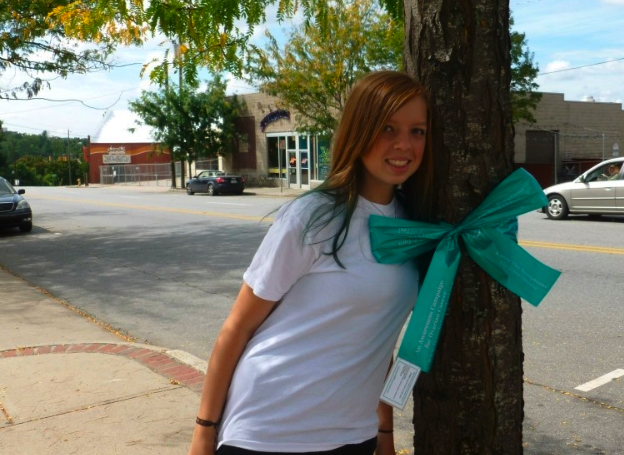 Karen MacNeil's oldest daughter, Skyler
Originally posted September, 2014.
It's not October yet, but pink ribbons are already sprouting up everywhere and I've already heard commercials for Pink Walks and Pink 5Ks, and we'll soon be seeing even football players donning pink — all for Breast Cancer Awareness Month. And thank God for these efforts. If seeing a pink ribbon or accessory here or there makes just a handful of women remember to check their breasts or schedule an appointment with a doctor, it has clearly done its job.

A lesser known cancer awareness month is actually here. September is officially Ovarian Cancer Awareness month and I bet you didn't know its official color is teal. I'm also betting you really haven't heard much about ovarian cancer at all even though, according to the American Cancer Society, roughly 1 in 73 women in the US will get it. And, to make matters worse, ovarian cancer has what are called silent symptoms which traditionally go unnoticed and misdiagnosed with all too often fatal consequences.

My amazing friend Karen MacNeil has been directly affected by ovarian cancer and has spent years trying to Turn Asheville Teal for the month of September to educate and empower. I wanted to ask her some questions about this campaign's history and future in Asheville and help keep her efforts going.

Ayana Dusenberry: You are one of the strongest, most badass people I know. But for those who don’t know you, tell us a bit about yourself and what led you to become an Ashevillian.
Karen MacNeil: I grew up in New Jersey. Back in high school I remember conversing with my friend’s grandfather who had some association with Warren Wilson College. He convinced me to apply. It was the only school I looked at because after visiting the college and these mountains in the spring, there was really nowhere else I wanted to go. I studied there and many other places since. I have two Ashevillain daughters, have fostered lots of dogs and worked a collection of interesting jobs. Latest as an RN which I love, but I still want to learn to be a mechanic, and more… herb farmer, goat cheese maker, upcycled clothing designer...pretty sure Asheville could teach me all this and then some. Soap maker…chocolatier…the list really goes on.

Ayana: How Asheville! But seriously, let’s get down to business. Ovarian cancer has greatly impacted your life. How were you first made aware of the disease?
Karen: My mother was diagnosed with Stage IIIC Ovarian Cancer in 1997. Before her official diagnosis, she had visited her doctor 3 times to express concern about what she later discovered were classic symptoms of ovarian cancer. At the time of her visits, the doctors dismissed her symptoms as the onset of middle age. She took fabulous care of herself, worked out all the time etc. so it didn’t seem right. This same year I had broken the news that I was pregnant with her first grand baby. Her first reaction was, “I’m too young to be a grandma!” After she found out she was sick, becoming a grandma literally became her life’s mission. She accomplished that mission and decided also that more had to be done to help others and raise awareness for the symptoms of ovarian cancer. She started Turn The Towns Teal (TTTT) cuz she’s crazy awesome like that.

Ayana: She most definitely was, and I feel so privileged to have known her. Tell us more about what Turn The Towns Teal is, how exactly it came about, and what the efforts have been so far.
Karen: My mom started the Turn The Towns Teal ribbon campaign in 2007 in New Jersey and laid the groundwork for it to go nationwide. It involved friends and volunteers getting together to tie biodegradable teal ribbons on trees all around town. The ribbons displayed some of the top Ovarian Cancer symptoms as well as websites and phone numbers for people to get additional information.  In 2009 my dad trademarked the name and my aunt went into high gear getting the word out. This year we have registrants in at least 45 states, many with multiple cities participating. 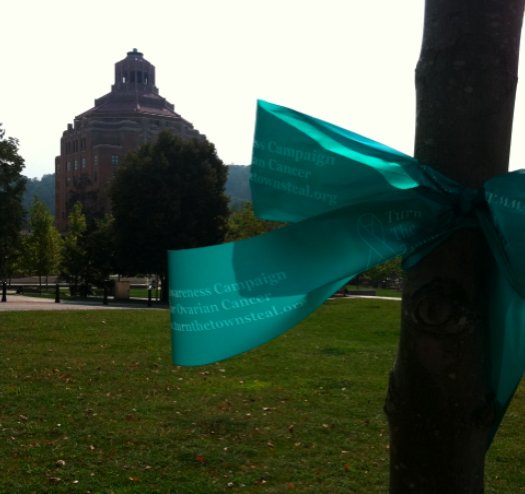 Ayana: I thought the ribbons on the trees looked beautiful and definitely had people stopping to check them out which, of course is the entire point. I see from the TTTT website that it’s growing steadily and is happening all over the country, but not in Asheville anymore. What happened? How has the campaign changed here?
Karen: My mom passed in 2008 and the idea of doing a Teal campaign without her felt a bit daunting.  My aunt convinced me to do our first Teal campaign in Asheville in 2010. It turned out to be such a surprisingly happy event. And it felt very healing to honor the survivors, the families of loved ones and my mom in such a beautiful way. The city seemed supportive and allowed the ribbons on city trees for 2011 and 2012. Each year we had a great collection of volunteers comprised of friends and family members of those diagnosed with OC to help put up ribbons and hand out symptom cards. Since 2013 the city has decided to uphold an ordinance banning any decorations on city trees. So, we have evolved and adapted by networking through friends, schools, and some local businesses, but the loss of city support still feels like a blow.

Ayana: I personally don’t understand opposition to something meant to raise awareness and that also looked really lovely. I’m happy to hear that it’s continuing in different ways though.
Finally, as a daughter of someone taken because of this disease, as a friend to survivors and fighters of cancer and other illnesses, and as a mother of two incredible, gorgeous daughters, what do you want Asheville women, men, and everyone anywhere to take away from TTTT? How can people get involved?
Karen: My mom showed us how to turn something awful like a deadly diagnosis into something positive. Rather than suffer in silence, she started connecting with people and getting a bit rowdy, but in her own very productive, sophisticated way. Her message was clear: Early detection saves lives. I want women and girls to feel confident enough to speak up about concerns they may have with their health or otherwise. Doctors don’t know everything. Adults don’t know everything. We all have to learn to advocate for ourselves and take some responsibility for our wellbeing.
If anyone wants to get involved, they can find me at Turn The Towns Teal: Asheville on Facebook. I love connecting with folks and giving out the ribbons and symptom cards so people can Teal their homes and workplaces here in Asheville, or find their own creative way to raise awareness. I want people to know there is support for those battling this disease and that we will continue our campaign to help save lives. 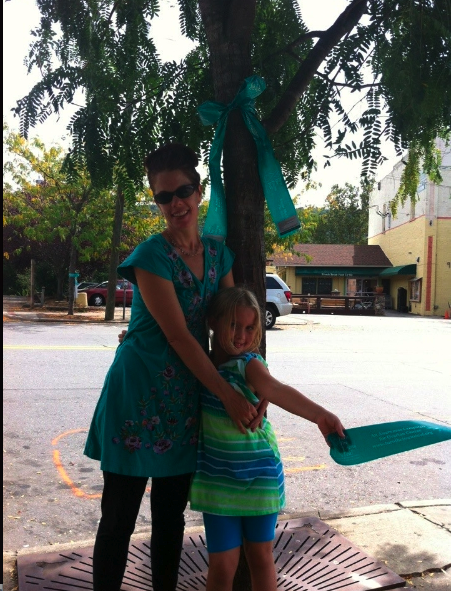