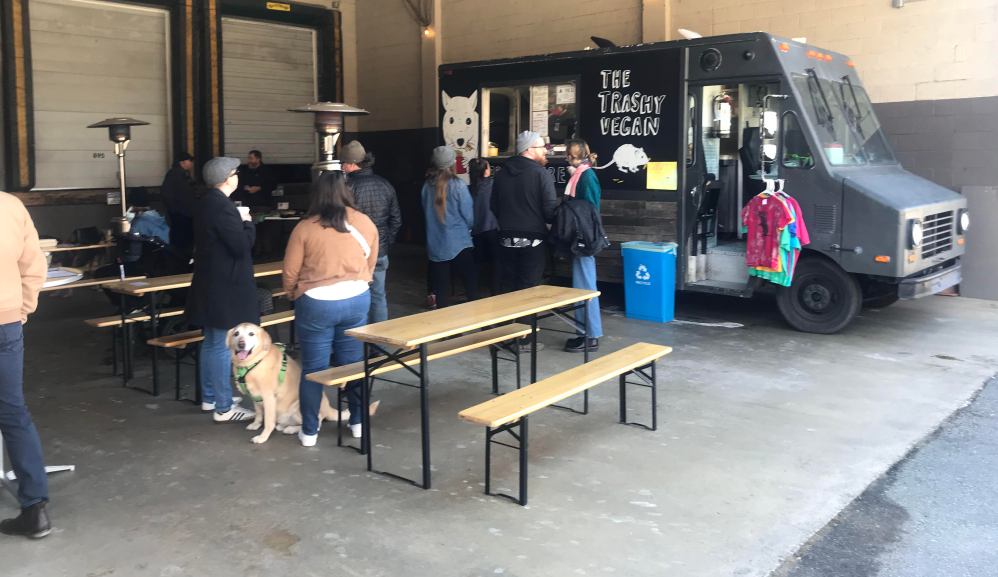 Sunday, March 13th, Sister Kitten animal rescue, and The Trashy Vegan food truck, teamed up events to raise money for animals in need. For every meal sold, fifty percent would go to the animal rescue. Sister Kitten was founded in 2019 by the executive director Eric Phelps pictured above.

The organization works to improve animal lives and the public’s perceptions of animals, with a focus on supporting community cats and “outdoor” dogs in Western North Carolina In addition to this the organization also Rescues and rehomes abandoned and neglected animals, provide trap-neuter-return (TNR) as well as support, education and gives assistance to community cat caregivers.

“So predominantly we work with community cats. We work with caregivers who are feeding outside cats. We trap the cats and get them spayed and neutered. We also have a foster program where we pull in kittens to socialize them to eventually get them adopted out.” says Phelps.

The Trashy Vegan, a beloved Asheville staple, provides delicious vegan burgers and sides. A woman waiting in a very long line leading up to the truck says “The burgers are so good and the money going to a great place we love Trashy Vegan.” The Truck has become so popular that the owners are opening a brick-and-mortar restaurant soon.

“We have been wanting to partner with Trashy Vegan for as long as we have been an organization. So it’s a real thrill for us to be partners with them to do a fundraiser,” says Phelps.

Phelps says he has been a vegan for many years, as a vegan and animal lover he wants to do more events with vegan companies around town.

“We work with cats and dogs predominantly, but I’m vegan, I have been vegan for a long time and I realy want to partner with other vegan organizations or restaurants,” says Phelps.

Sister Kitten offers multiple volunteer opportunities for people who are interested. They also have a donation portal on their website.