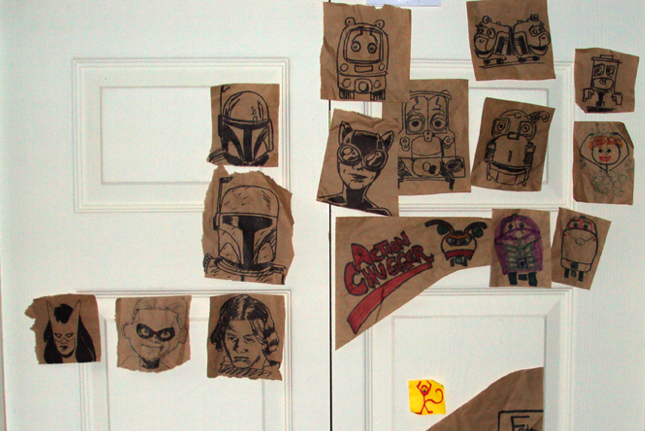 I can’t remember if it was me or the The Countess who thought up the monkey stairs.
Eh. It’s my column. I’ll say I did it.
We train The Deputy to help with chores or build skills by offering a toy. We’ve done this sicne he was a toddler. Potty training earned him a car from a Matchbox set. After two 10-packs of cars, he and the toilet were tag team champions, and we trashed the diaper bucket like it owed us money.
As he got older, we wanted to continue the idea of earning toys.
(Quick Aside: I learned quickly this is the essence of parenting – misdirection and bribery. Always have a small list of options the kid can choose from to avoid a meltdown or offer him something to hold it together. Self-interest will hold off that tiny Fukushima. And it doesn’t have to be expensive or long-lasting. Just enough to get through The Thing What Needs Doing.).
So, the monkey stairs. And if you’re just joining us, it was all my idea. We cut a small staircase out of butcher paper and taped it to the pantry door. We drew a monkey on a Post-It and labeled each step as days of the week. Each day he correctly completes that chore or skill, the monkey goes up one step. When it gets to Friday, it touches a drawing of the toy he wants, and he earns it. 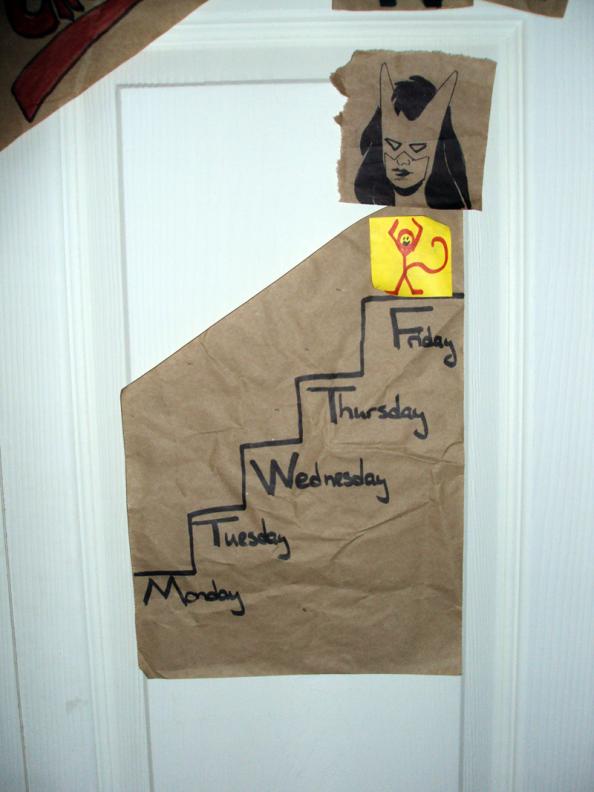 He’s done this over a dozen times. Each time we ask him what he wants to earn, and the trophy display of his successes charts his progression of interest. He started off as a Chuggington fan, so the earliest drawings are of those hyper trains. For those who haven’t seen it, Chuggington is Thomas the Tank Engine after five espressos. He moved from those toys (and cartoons, thank God) to Star Wars and superheroes.
This isn’t the only way he gets toys. We’re not heartless. If we’ve had a big day of running errands, and he’s been a trooper, I’ll surprise him with a toy. Usually it’s an action figure so he can recreate his favorite episodes. He turns four at the end of the month, and he’s old enough to ask if a character has a toy he can earn.
He usually follows that question with a second: What can I do to earn it? It simultaneously warms my heart and breaks it. I’m glad he understands the reward system, the investment of work for a payoff. But I wonder if I’m living up to my last name and crafting an urchin who thinks there’s a mountain between him and every beloved knickknack.
It’s not as if these things cost a lot. Frankly, it’s worth $8 to me for him to learn a task or bolster a mindset toward cleaning and organizing. That’s a bargain for kid expenses. But I noticed a trend in his recent toy requests: They’re all women.
The most recent toy talk we had was at the dinner table.
“Can I get a Berriss?” he asked, hands clasped.
“A who?”
“Luminara’s padawan. Can I earn her?”
Oh, right. Her. The Clone Wars series takes place between Episodes 2 and 3 of the Star Wars films. The Jedi, as we learned in Episode 1, have sidekick Jedi. Force interns. In the cartoons, a female Jedi, Luminara, has a female padawan, Barriss Offee. We meet her in a two-part episode where she teams with Ahsoka, the trainee of Anakin, the future Darth Vader. It’s a good story. The padawans sneak past a nest of alien bug guys to blow up a weapons factory, willingly sacrificing themselves to get the job done. (Spoiler alert: They live.) My Deputy loves that two-parter. He got Ahsoka earlier this year in a large Easter egg.
After discovering the Justice League cartoons, he also wants toys from those series, and again he asks only for the women. Wonder Woman. Stargirl. Supergirl. Hawkgirl. Last week, he earned Star Sapphire, his first Justice League toy. She’s a villain with energy powers. He earned her by learning how to scrape his dinner bowls clean. (That one was on us; we accidentally trained him to hand us his bowls too soon, and we had to stop what we were doing to feed him the remainders.) He was temporarily crestfallen to learn his favorite villainess, a rogue Amazon, wasn’t made into a toy. 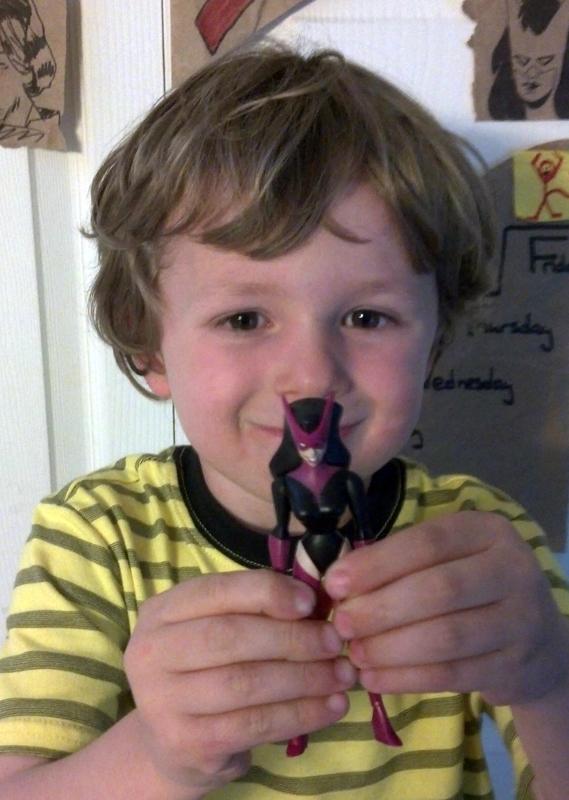 I’m not surprised he’s asking for toys of heroines. Both cartoon series do a great job making the women competent and cool. Wonder Woman has a chip on her shoulder about Man’s World. Hawkgirl clobbers spaceships. Stargirl and Supergirl are competitive. The female Jedi steal every episode they’re in. Check out the episode where Luminara and Ahsoka fight Ventress, the female Sith apprentice. It’s a brawl.
His mother, The Countess, is thrilled with this. She remembers too well the weak supporting female characters of our childhood shows. They were the first to be captured, the first to be defeated, the ones susceptible to fainting. She hates it. When he got a Batman figure as a present last year, she bemoaned a lack of heroine toys.
“I wish we could get him a Batgirl.”
“Be right back.” I went to my workshop and returned with a Batgirl.
“You had a Batgirl.”
“Do you not know who you married?”
These recent cartoons – which she never would have seen without our dude – and his interest in recreating their adventures give him hope that he’ll grow up thinking a heroine can win the day as often as the males. That woman can kick as much butt. And I make comic books centered on female heroes. I’m delighted he’s found similar stories.
I went to eBay and found that padawan toy. The Buy Now price and shipping were decent, and I asked him if he was sure. He said he was. You can’t change your mind, I warned him. He still wanted her. Done. The toy arrived over the weekend.
Now we gotta figure out how he can earn her.