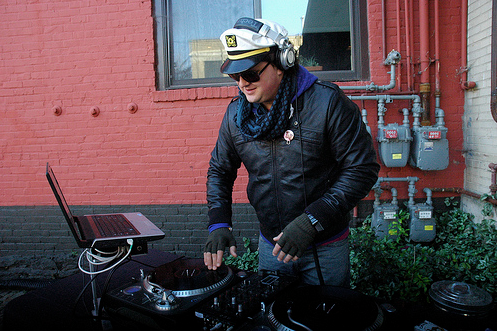 Just a few years ago Asheville’s nightlife and dance scene was little more than a few clubs and a feeling of desperation. But lately, the seemingly-endless number of incipient bars and clubs have launched the platform for a thriving DJ arena.

Various businesses, not limited to clubs, are trying to provide entertainment and the amount of regularly employed DJs is on the rise. It’s no secret that Asheville relies heavily on our service industry to fuel our local economy. If people aren’t going out and spending money at night, then a majority of our local workers can’t go out and spend money during the day, getting coffee or a haircut.

Technology is usually something that separates people and confines them to their own cyber worlds, while DJs now use it as a tool to bring people together. It’s an interactive medium in which there is a symbiotic relationship between the DJ and the crowd. Any one person, at any point, can approach a DJ and make a request, changing the feeling and atmosphere themselves (if the DJ in question takes requests, that is).

In 2006, three scholars, Carrie Gates, Sriram Subramanian,  and Carl Gutwin, attending the University of Saskatchewan wrote an article on the digital artist collective site notype.com called , “DJs’ Perspectives on Interaction and Awareness in Nightclubs.” They interviewed 11 DJs across the country to establish a better understanding of how DJs interact in night clubs. They wrote:

We found that DJs interact with audience in complex ways, and that DJs are adept at reading the audiences, despite the demands of selecting and mixing music. DJs watch for early signs of disengagement in the dancers, to give themselves enough time to smoothly work their musical response into the presentation before the dancers start to leave the floor. DJs often plan musical energy changes several songs in advance, in order to take the dancers on a cohesive and dynamic musical journey.

They go on to explain that there are flaws with this, however, as DJs have to be focused. It’s usually dark, and they are frequently battling interuptions.

But being a DJ is easier than ever, in some respects...

Anyone with a laptop can make a playlist and call themselves a DJ as more people switch from vinyl to digital. And as a result, it is becoming an exploited market. DJ’s are often being underpaid or paid in bar tabs for several hours of work. What isn’t being considered is; if the DJ can do their job well  and all of the extra work, outside of playing music, that they have to do to bring in a crowd. Most DJs are responsible for marketing themselves and inviting people to the nights they play. Finally, beyond a laptop, all the equipment needed to play costs thousands of dollars.

I’m not saying that there aren’t businesses in town that pay DJs well and treat them fairly, I’m just saying that with the flooded market and ability for business owners to replace DJs at the drop of a hat, it’s hard for the business of DJ’ing to maintain its integrity. Which is a shame, because having people committed to bringing people out at night, benefits us all economically.

Some of my favorite DJs in Asheville (in no specific order) are as follows: