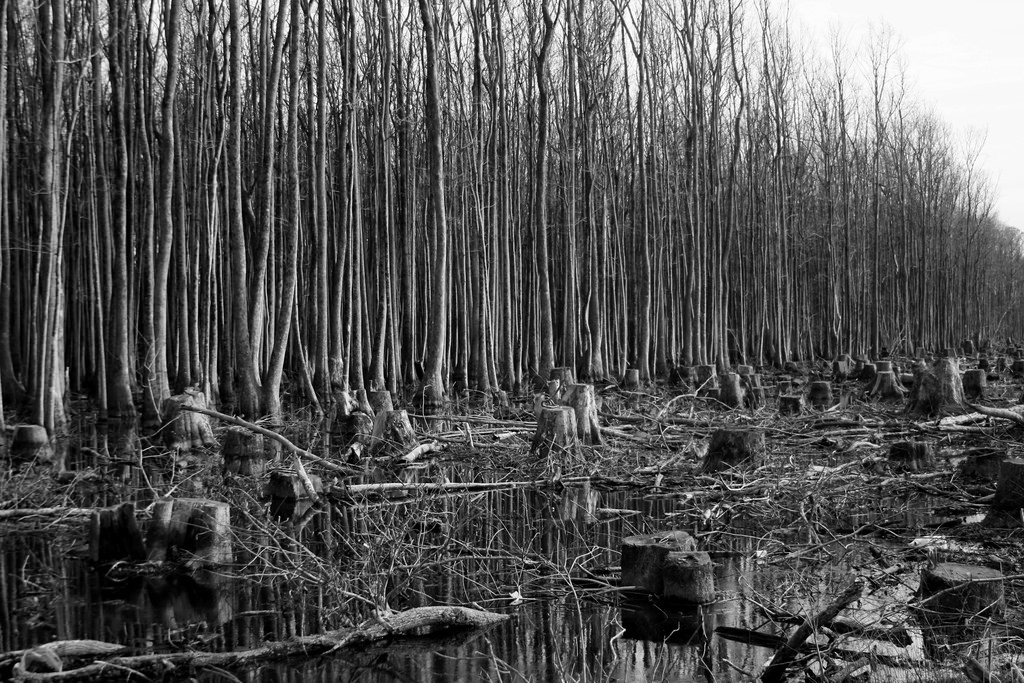 At the closing of the year, as folks gathered around loved ones to sing carols and roast chestnuts, Enviva geared up to export more precious Southern Forests to burn in European smokestacks. On December 22, 2016, Enviva’s Wilmington Export Terminal sent their first shipment of wood pellets abroad. This news has been portrayed as purely a success for the environment, economy, and people of the region.

Dogwood Alliance wants to set the record straight about what Southerners affected by the biomass industry actualy think about the increased capacity for sending our forests away to be burned.

Captain John Wolfe, a writer, and activist in Wilmington, said most poignantly, “Forests give us scale, teach us we are finite. We scarcely realize how much we need wildness until we lose it. When that happens, we are truly lost.” 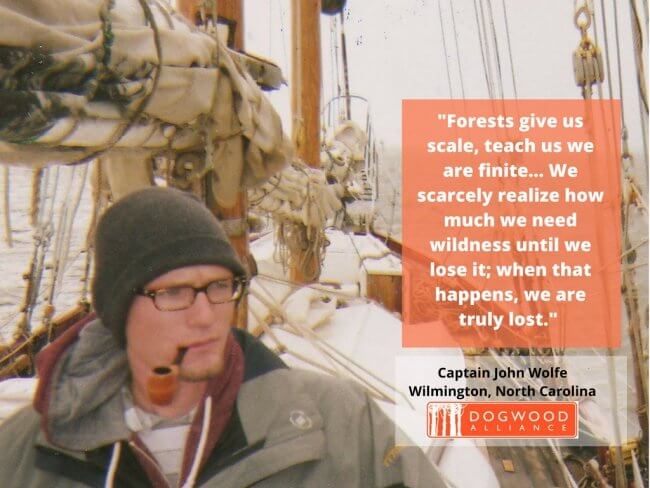 Right around the holidays, Enviva sent about 50,000 metric tons of wood pellets to the UK on the first shipload. Instead of celebrating this, Southerners like Ashli Thomas see these wood pellet ships not as a vessel but instead as “miles of clearcuts I know happened. It’s a feeling of loss.” 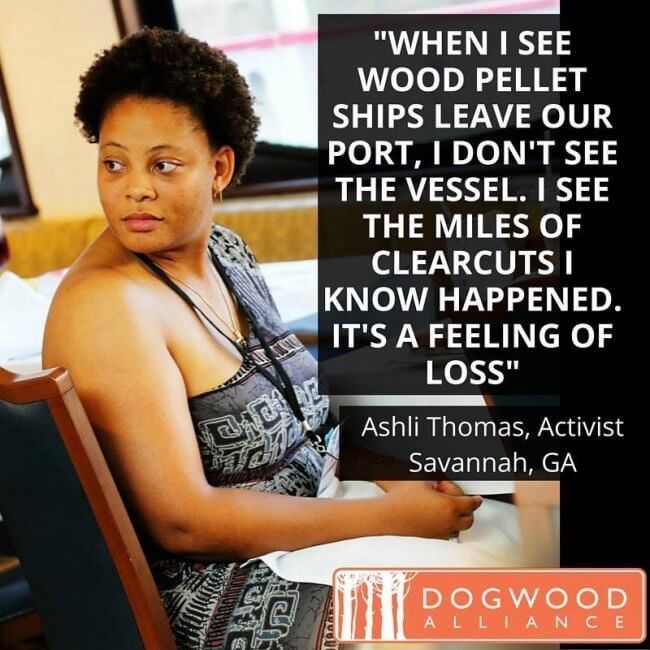 One Enviva shipload is nearly 850 acres of chopped down Southern forests. Those acres include critical habitat for species like migratory birds such as ducks, whitetail deer, rabbit, and diverse amphibian species. Without those forests standing, the species cannot live there. Without those forests standing, Southern outdoorsmen have less recreation areas where they can hunt, fish, explore, and hike.

On a local level, Enviva claims that the wood pellet exports are safe: “It has very little dust.” However, we know both scientifically and anecdotally that wood pellets at export facilities are detrimental to the health of the surrounding community. Henry Lawrence, a Southerner who lives near Enviva’s Panama City export city told us, “When you sit down by the port and watch Enviva load its wood pellets, you notice wood dust flying everywhere. It gets in your nose, it gets in your eyes, it makes you start coughing. It’s not safe to breathe.” 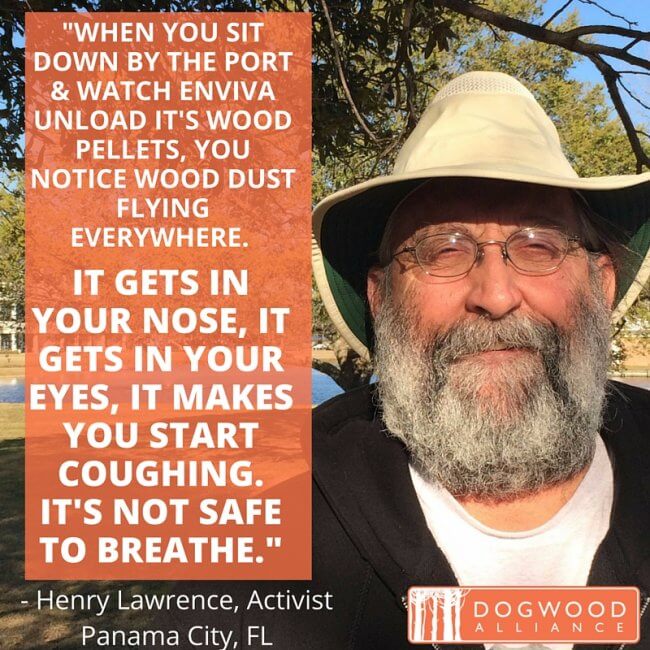 The American Heart Association warns, “Short-term exposure to small particulate matter can trigger cardiovascular-disease, mortality, and illness; long-term exposure reduces life expectancy up to a few years.” Churning Southern forests into wood pellets to be exported transforms the lungs of the earth into breathing hazards.

Shockingly, Enviva claims that the wood pellets shipped from Wilmington are “made from low-grade wood fiber, wood with size defects, disease or pest-infestation that would render it unusable by lumber industries.” Dogwood Alliance has documented Enviva clear-cutting whole trees and wetlands on several occasions-- especially in this region of the South.

EXPORTING SOUTHERN FORESTS TO BE USED AS FUEL IN EUROPEAN POWER STATIONS TAKES AWAY ONE OF OUR REGION’S BEST DEFENSES AGAINST NATURAL DISASTERS.
Whether it’s hurricanes, flooding, storm surges, or drought, forests play a vital role in the protection of lives and livelihoods. Given that continued unchecked logging and fossil fuel emissions are to blame for 2 out of the 5 world’s most expensive natural disasters in 2016, it’s time that Enviva stop this greenwashing.

THE U.S. SOUTH IS NO STRANGER TO LONG-TERM ECONOMIC EXPLOITATION OF OUR NATURAL RESOURCES.
Enviva and the biomass industry are just modern day examples of a wealthy interest taking as much and as often from the land as they want with little regard to economic development, long-term environmental sustainability, or representing communities’ interests. Reverend Leo Woodberry, a community member in Richmond County, NC, where Enviva hopes to build another wood pellet plant to help feed the Wilmington export terminal commented “Just as slaves in the South were exploited to meet the needs of European textiles mills and traders, the same monied interests are exploiting our forests to meet Europe's energy needs hundreds of years later. And instead of suffering the slave master's lash, we all must suffer health risks, weather disasters, and the impacts of climate change.” 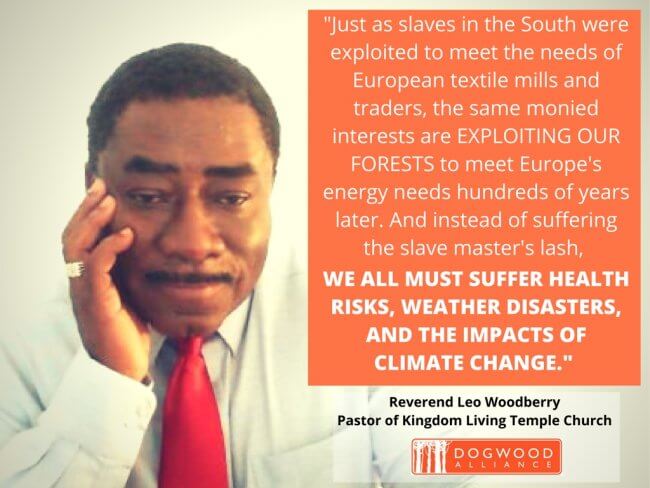 No matter what Enviva or the biomass industry report as a “positive” about the new export terminal, Dogwood Alliance stands by Southerners who believe that biomass harms their communities, the environment, public health, and the climate.

WE WILL CONTINUE TO DO ALL WE CAN TO PROTECT THE GEMS THAT ARE OUR BEAUTIFUL SOUTHERN FORESTS. 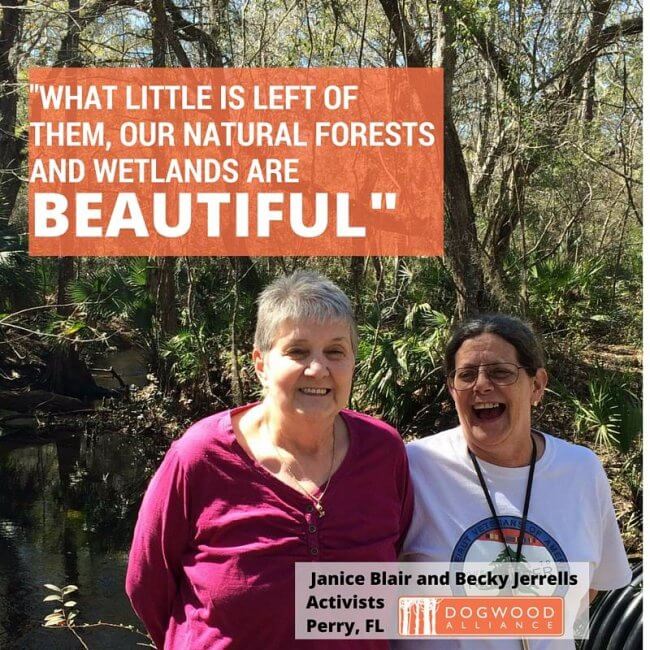 STAND WITH SOUTHERNERS AND SAY NO TO ENVIVA.