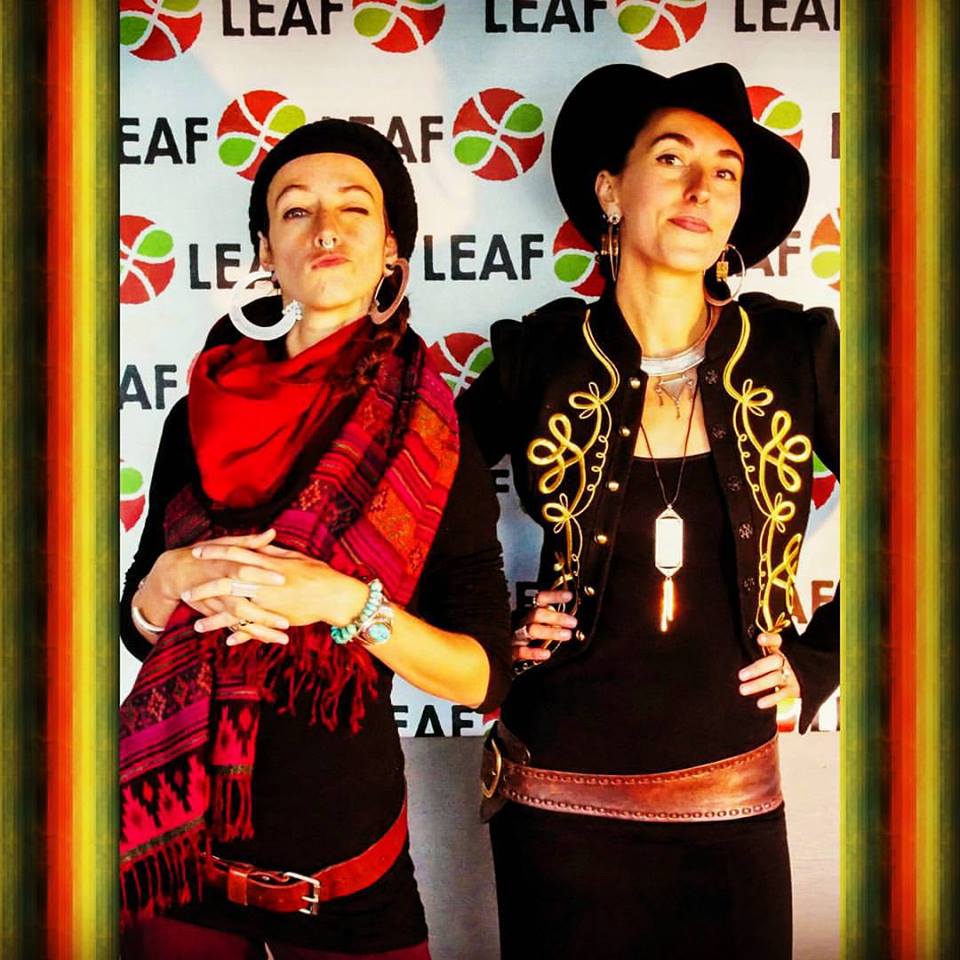 2015 marked the 20th year anniversary of the semi-annual Lake Eden Arts Festival with this past weekend’s Fall installment dedicated to “Celebrating the Spirit of New Orleans: Thriving 10 Years Post Katrina.” The local nonprofit secured some of the Crescent City’s most notable performance acts including Aaron Neville, Preservation Hall Jazz Band, Dumpstaphunk, Rebirth Brass Band, and The Revivalists. However, out of all the headlining artists to play LEAF this weekend, the act with strong ties to New Orleans but residing closest to home is unarguably the Asheville-based Folk/World troubadours (and LEAF veterans) Rising Appalachia.

In an article with Susan McDonald of the Providence Journal, Chloe Smith elaborates on how the group’s sound was influenced by their seven year stint in the Big Easy. “As for soul, I think the entire world knows New Orleans as the champion of spirit, music, and dance. The voice and songs of New Orleans will knock you off your feet and strike you quick with an almost obsessive heartache and love. Leah and I went down to the city after Katrina to work with an amazing theater troupe on a post-storm art collective piece and basically never left. We lived for in NOLA for 7 years and cut our teeth busking in the streets of the French quarter and soaking in the jazz and brass of its people. Naturally, and in its own way, those sounds seeped into our music as well as into our identity as southerners. We are always sort of pointing our compass and our calendars to a time when we can go back to that wild and messy city.”

This past April the band helped lead an interfaith memorial and New Orleans-style jazz funeral procession to the headquarters of BP for the Gulf of Mexico’s losses due to the Deepwater Horizon oil disaster five years ago. Their 2012 song and album title-track “Filthy Dirty South” was written on their back porch in New Orleans when the oil first began to flow out into the ocean. Since then the band has utilized the platform of their music to draw attention to a variety of environmental and social justice pursuits. In July, Leah Song traveled back to New Orleans to speak and perform during the cities 10 year anniversary of Katrina.

Rising Appalachia’s history is clearly tied to their experience in the Crescent City and their ongoing actions and activism demonstrate their love of it. We had an opportunity to to sit down with Chloe Smith of Rising Appalachia this weekend and ask a few more questions regarding the sisters experience in NOLA.

Adam St. Simons: You originally went down to NOLA to work with a theater troupe on a post-storm art collective piece. Can you share a little bit about that project?

Chloe Smith: We met many New Orleanians at an arts and activism gathering in North Carolina called Alternate Roots just a little bit after the storm and were enthralled by the theater work in particular that folks were building as voices of the land down there. Our friend Nick Slie from a theater company called Mondo Bizarro (Look them up. They continue to construct some of the best work in the city!) was a professor at Nunez Community College in St. Bernard Parish at that time, which was one of the hardest hit areas of the flood waters. Their school was on the long road of getting back on its feet and wanted to host a gathering of music and dance and speakers to provide local residents and volunteers with that very backbone of New Orleans culture that was hard hit by the storm: ART. Most of the area had no electricity still and was very much a ghostland of its former self, and that night in the gutted out theater of the college was a sort of beacon for the area to see that things WERE coming back and that local teachers and artists like Mondo Bizarro were a large part of that rebuilding process. Leah and I came down and sang our songs in offering to the neighborhood and the triumphant spirit of the local people. That connection and deep collaboration was the seed of what was to become a long term enamored relationship with Louisianna and its incredible creative communities.

Adam: Through your own experience, how have you seen New Orleans change in the past 10 years post Katrina?

Chloe: I officially moved down to the city in 2006, one year after the storm, when things were still very much in transition from a sort of army-state post flood nightmare to a blossoming cultural mecca of sorts. Since I am not from New Orleans and never visited the city in its "original" form, my interpretation of how it has changed is rather limited since my perspective is on a basis of 10 years only. However, like all the reports and census' and theater pieces inform us, New Orleans is not what is was and perhaps will never be again. Its gentrifying and polishing up and putting on a new shine that is perhaps not so representative of some of its deeper cultural roots and heritage. I have friends all over the city that are getting priced out of what used to be affordable housing and eclectic neighborhoods. That being said, it is also resilient, highly supportive of the arts, architecturally diverse and stunning, a literal hotbed of creativity from the ground up, highly neighborhood based, prideful and boastful, a sure-go-ahead-and-have-a-margarita-on-a-tuesday-morning type city, and importing and exporting the best music in the entire country to this day.  Things have changed, and there are so many people working on the ground to try to help midwife those changes responsibly and with local people in mind, and yet change is the only thing constant in this world.

Adam: Why do you feel it’s important to celebrate and commemorate the anniversaries of tragedies such as Katrina and the Gulf oil spill? What is the message and/or lesson that we should all be keeping in mind?

Chloe: The 10 year anniversary of Katrina was this year, and I learned something very vivid from some of my people down in the city that are either from there and living elsewhere or still living in New Orleans. Katrina was very traumatic for many people, and to have those images flashed around the news and re-introduced on a regular basis pulls a lot of folks back into the nightmares that they experienced. So, we learned that although it is important to remember the flood and keep the families most effected in our hearts and prayers, there is equal responsibility in allowing those folks to move on and not necessarily always bring up the K-word every year. We can all mark the occasion and hopefully learn what "not'' to allow our government to do in the future to its own citizens while supporting New Orlenians in their resillient efforts to go on with their lives and move forward with prosperity and in-tact communities. Same thing goes for the Gulf Oil Spill. Our whole band had the opportunity to march on the BP Headquarters this year in protest of their offshore drilling and shady extraction practices in the hopes that there is some continual accountability of these massive oil tychoons for the health and wellness of the local people left in the messy aftermath of their malpractices. The best thing we can all do is educate ourselves and remember that much of the mess of Katrina and The Gulf Oil Spill could have been prevented by synergizing WITH the land instead of going against its natural rhythms. Once there is an awakening of how to co-exist with the land and her mighty ebbs and flows, we will see far less disasters such as these. That being said, we continue to celebrate New Orleans every day in the Rising Appalachia headquarters and always look forward to when our song-boat can sail down to the Mississippi waters to parade hand in hand with some of our favorite people in the world.

Adam: What were the biggest and/or most important lessons you took away from your experience in New Orleans?

Chloe: That community is family.  That in times of need, you better know your neighbors.  That cultural identity and a sense of place is just about as important as food and water, and in leiu of those things, people tend to walk around lost and with a big piece of themselves missing.  That dancing with a parade down your street on a Wednesday morning is the best medicine for a broken heart.

Adam: Much like Asheville, New Orleans is a music city filled with incredibly talented artists and a community of industry professionals that help turn the gears. Who are some key people that you had the opportunity to work with and learn from during your time there? Did you have a chance to reconnect with any of those people/performer this weekend at LEAF?

Chloe: We worked a lot with theater companies scoring music for installations, ritual performances, and plays. Some of those companies include Mondo Bizarro, Art Spot Productions, NORD-NOBA, and Junebug Productions. Musically, we connected a lot with Laila McCalla (former Carolina Chocolate Drop member), Aurora Nealand, Cedric Watson, Preservation Hall, and the list goes on and on and on into infinity really as there are more musicians in New Orleans than any other type of person! LEAF was an incredible container for all our cross polination of muse and spirit and we were delighted to connect with old friends and dance our tails off all weekend to pretty much every band on the stage. We are incredibly thankful that LEAF has such a solid relationship with New Orleans and that the bridge between Appalachia and the bayou remains as strong as ever.

Adam: Much like Asheville, there are so many great music venue’s in New Orleans. What were/are some of your favorite to perform at?

Chloe: One of our favorites was the streets of the French Quarter. Leah and I spent 2 years busking in the city, polishing up our songs and seeing how they effected the passer-bys and it was one of the most unique viewpoints on the city. Performatively, busking teaches you to hone your craft while remaining humble... which I would suggest to any beginning musician. On the other end of the spectrum, we recently played at the newly renovated Civic Theater which is a gorgeous new venue for music and theater alike.

Adam: What do you miss most about living in New Orleans?

Chloe: Everything, minus the violence. I miss seeing all my friends on the streets without ever having to pull out my phone and coordinate anything. I miss the smells of jasmine and salt water and sewage and roasting coffee. I miss the sounds of all my neighbors practicing various instruments with their windows open. I miss the postman calling me, and everyone else, "baby". I miss costuming 30 times a year. I miss the diversity and the spirits and the street calls and the rich food.... but if we all keep our eye on things and work to keep New Orleans weird and wild and authentic.... those will all be there forever.

Rising Appalachia return to the road this month for their West Coast leg of their 2015 "Groundswell Tour". The tour will be in support of the Prison Yoga Project, a non-profit organization who works to bring yoga and mindfulness to American prisons, and will feature touring support from the Asheville-based West African folk musician Arouna Diarra. For more information, tour dates, and ticket links, please visit: http://www.risingappalachia.com