Ringing in the New: A New Year’s Eve Walking Tour of Downtown Asheville

Ringing in the New: A New Year’s Eve Walking Tour of Downtown Asheville 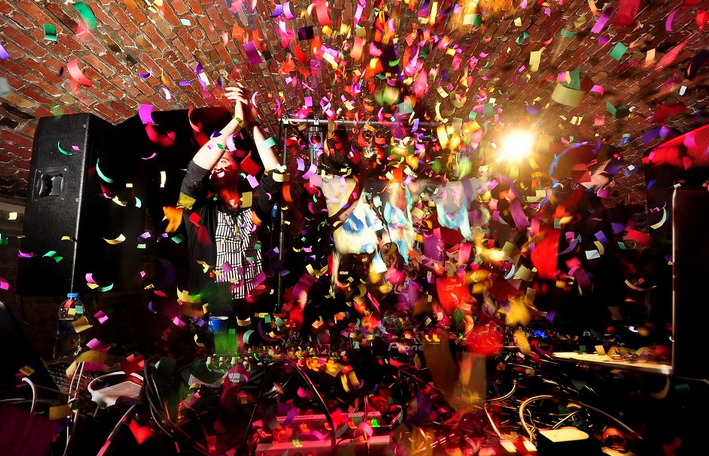 New Year’s Eve. It’s that time of the year when some of us take a long, introspective look back at the previous year and decide whether it’s time to celebrate all we’ve accomplished or drown it out with loud music and strong drinks. Whichever side we end up on, chances are that the end result will commemorate the holiday in some way, whether we’re remembering good times or vowing never to look back. Regardless of your motivations, Asheville has plenty of events to keep you going all night. In fact, there are so many excellent goings-on, why stop at just one? Dear readers, I have compiled a New Year’s Eve Downtown Walking Tour just for you. This Tour gives you the option to wander between spots and enjoy the best of all the city has to offer, but it also highlights some of the best and buzziest events in town, inviting you to find your perfect venue and stay put.
In anticipation of all the walking and dancing you’re about to do, eating is your first priority. Stop in at The Nightbell (32 S. Lexington Ave.) for their prix fixe dinner menu between 5 and 9 pm ($65 per person, reservations required). Nightbell is currently my favorite restaurant in Asheville, and Chef Katie Button (of Cúrate fame) is up for the James Beard Foundation’s award for Best Chef—Southeast in 2015. If you haven’t tried Nightbell yet, you can expect the same precision and perfection that Button has been serving up at Cúrate, but with an added dash of pure creativity and play. It’s the most imaginative food in town (with cocktails to match). Nightbell will also be offering up drinks, snacks, and dancing all night ($10 cover, no reservation required). 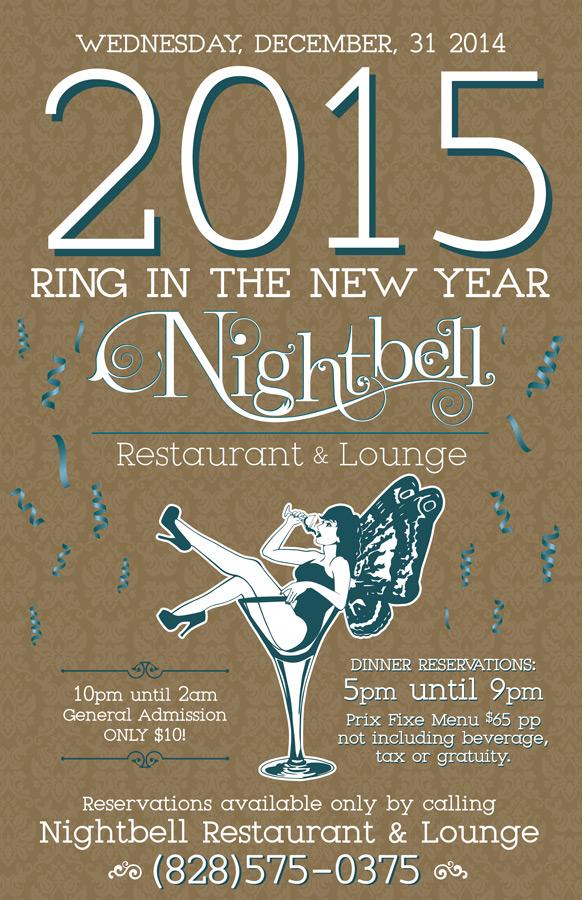 From here, you’re close to your first stop—The Orange Peel (101 Biltmore Ave.), where locals Selector Cleofus and RBTS WIN open for electronic impresario RJD2  Asheville-based Selector Cleofus dabbles in multiple styles, and his sounds, which range from jazz-infused to hip-hop to dubstep, will get your party started. Takea listen on their Soundcloud page. You’ll want to stay or cycle back to the Peel later in the evening to see local favorite RBTS WIN, who will bring their vision of psychedelic beach music with a mystical mountain edge to the stage after Cleofus. RBTS WIN looms large on the Asheville music scene, and the band’s popularity shows no signs of slowing. In the last year they’ve performed at Moogfest, opened for Blue Sky Black Death at the Asheville Music Hall, and played a slew of local shows and festivals. Their album Palm Sunday: Deluxe Edition sounds like an anthem to an endless summer. Headliner RJD2 follows RBTS and brings his infectious beats to the stage to ring in the New Year. His most recent solo album, More Is Than Isn’t, was released in 2013 on his label, RJ’s Electrical Connections. He is also a co-founder of Icebird with Aaron Livingston, vocalist of The Mean. Check out their Soundcloud here.
The show is actually SOLD OUT, so hopefully you grabbed your ticket early. If not, there’s a chance that people’s plans will change, so keep eyes and ears peeled for an opportunity to check out the music anyway. Doors at 8, show at 9 pm. 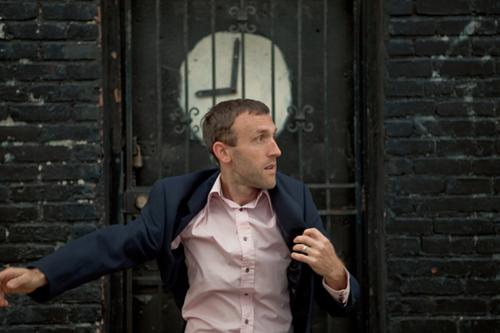 Maybe you didn’t grab a ticket to the Peel show. Maybe you’re looking for a little more variety. Or maybe you just want to see absolutely as much as you possibly can on New Year’s Eve. If any of these are the case, head to New Mountain Asheville for their New Year’s Eve Masquerade (38 N. French Broad Ave.). The line-up is a not-to-miss, non-stop parade of amazing artists that includes Aligning Minds, Emerald Curtain, In Plain Sight, The Lee Boys, Hank West and the Smokin’ Hots, Empire Strikes Brass & Push/Pull, and a whole lot more. No matter what kind of music you’re into, the evening has something for you as sets move between psy-trance, house, dubstep, glitch hop, and “Art-Rock-Jazz-Exotica.” There are also visual delights scheduled for the evening, including performances by burlesque dancers and alternative models Deb au Nare and Memphis Moonshine. Check out the full lineup here. Tickets are $19.99. 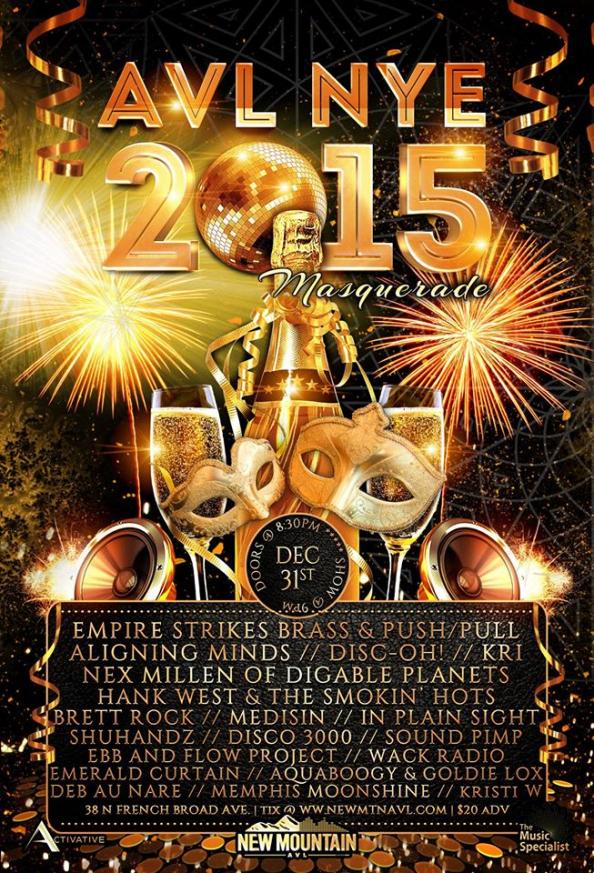 At this point, you may be broke. Luckily, there’s some great stuff happening that’s also completely free. Wander over to the LAB (Lexington Avenue Brewery, 39 N. Lexington Ave.) to check out D.J. Kutzu (also of Vinyl Time Travelers). Kutzu is known for his virtuosic old-school scratching skills and high-energy sets, as well as for his ability to scratch with chopsticks (seriously, you’ll want to check this out). Kutzu will be keeping the party going from 9 pm – 1 am. Keep heading down Lexington until you get to Tiger Mountain Thirst Parlor (112 N. Lexington Ave.), where you’ll step back in time for the New Year’s Eve Decades Dance Party (also free). Dressing up is encouraged. The party starts in the 1950s at 10 pm, and the music shifts up a decade every half hour (and yes, this does mean that at midnight they’ll be playing the biggest hits of the 2020s). At midnight, you get a complimentary shot of bourbon. What’s not to love? 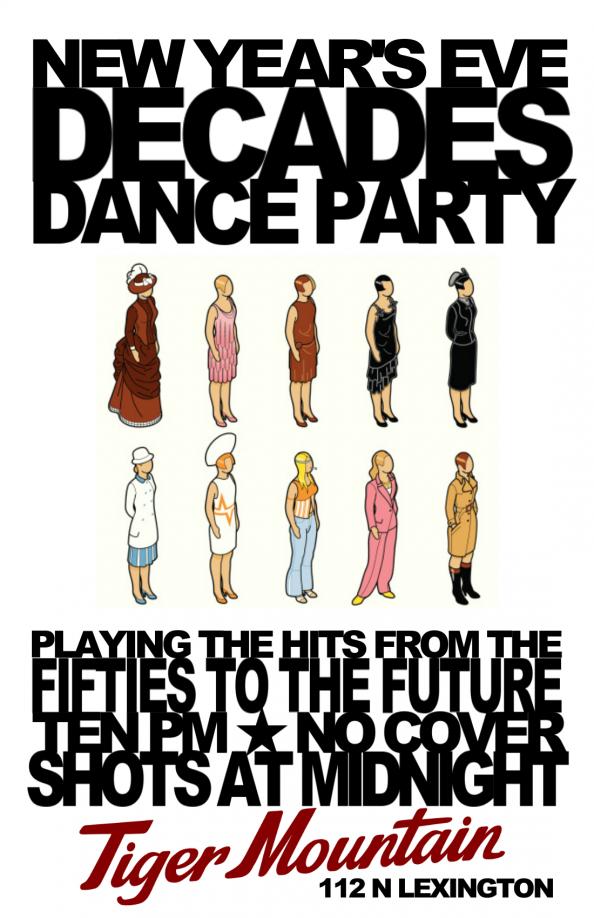 Whether you got plenty of sleep or stayed up all night, you may still need to burn off some leftover energy from 2014. If so, you can participate in the Resolution Walk or Run on New Year’s Day. This 5k happens downtown and benefits Brother Wolf Animal Rescue. Registration is $22. Check out the details here. The race starts at 10 am.

With events like these to help you ring in the New Year, the future is bright. I’ll see you in 2015.