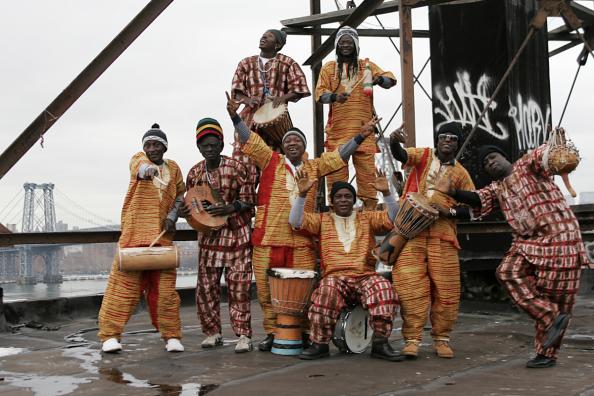 Many people already know the story of Sierra Leone's Refugee All Stars. But, if you don't, or you need a reminder, here's the short story before we get to our Q&A.

Forced to flee Freetown, Sierra Leone due to a bloody, horrifying war, three musicians met at a refugee camp on the border of Sierra Leone and neighboring Guinea. This was 1997. It became clear that they weren't returning home anytime soon, so the musicians teamed up to play music for fellow refugees. They sang songs of hope, optimism, and joy, to help get through the day and overcome a tremendously difficult situation. A documentary film and four records later, including their newest Libation (2014 Cumbancha Records), Sierra Leone's Refugee All Stars are still going strong and spreading their musical message. Watch the video below to learn a little more and see some footage from Sierra Leone.

This Sunday August 24th, they are coming back to Asheville again (they love it here) for a performance at The Grey Eagle. I got to chance to chat over email this week. Here's what they had to say...

Zansa AfroBlog: I know SLRAS have played Asheville before, you've played Lake Eden Arts Festival, and you've also done some work with their community program LEAF in Schools & Streets. What makes you enjoy coming back to the Asheville area?

Sierra Leone's Refugee All Stars: We love Asheville! The people are always very friendly to us and they dance to our African music. The mountains look very similar to our mountains in Sierra Leone, with some of the same crops growing. It is much like being at home.

ZAB: How often does the band make it back to Sierra Leone to perform, or back to West Africa in general? Give us an idea of how performing there compares to a show here in the States.

SLRAS: We tour from March through September all over, then we return home to Sierra Leone to spend time with our families. If the people are feeling the vibes, it doesn't matter if we are performing in America or Africa or Japan, a connection is created.

ZAB: I've seen your documentary and know the origin story of the band. What is the current political, and social, climate like in Sierra Leone?

***Want to help? Go here to donate to the fight against ebola- www.weowntv.org/donate/ebola-campaign/ ***

ZAB: Can you speak a little of your song writing process? I hear a good mix of styles throughout your catalog, is that intentional or does it just happen naturally?

SLRAS: Each member of the band writes songs, in his own way. Then we will each contribute with our instruments until we build the right feeling. The latest album features the songwriting of Reuben, Ashade, Black Nature, Jahson, and Dennis.

P.S. Zansa will be opening the show on Sunday! We're excited to support these guys.