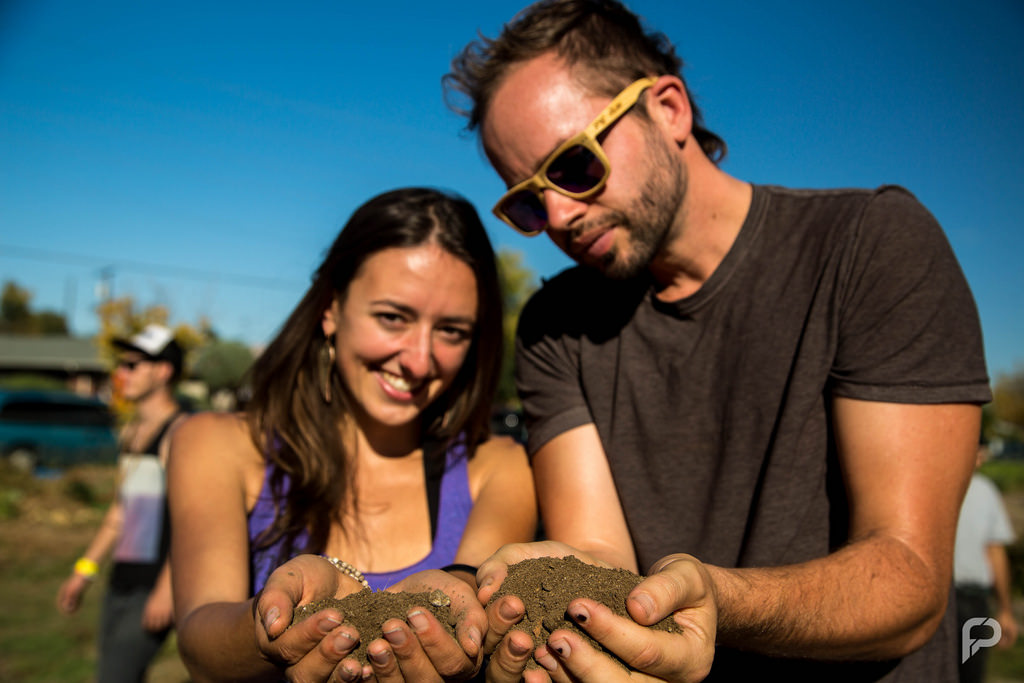 Ayla Nereo and David Sugalski, AKA The Polish Ambassador

Friday night, October 9th, marks the return of electronic dance music producer and permaculture poster boy The Polish Ambassador to Downtown Asheville. While TPA, real name David Sugalski, will be dropping beats and making the crowd move at New Mountain Asheville on Friday night with an opening set from The Human Experience (co-collaborator of Soul Visions with local Folk/World artists Rising Appalachia) and official after party featuring Wildlight and Ayla Nereo, the focus of this article isn’t on this most epic of dance parties but on how David and his team have harnessed the energy of concerts and festivals to manifest positive and tangible change within the local communities that Jumpsuit Records visits while on tour. We sat down with permaculture wizard, community organizer, and Permaculture Action Network member Ryan Rising to learn more:

Adam: How did the these actions days start?

Ryan: Permaculture Action Days started with the Pushing Through the Pavement: Permaculture Action Tour in the Fall of 2014.  A team of community organizers and permaculture educators toured the United States with music producer The Polish Ambassador, visiting 32 cities where the audience of each show was invited out the next day to build, plant, and create local projects in their communities including greenhouses at urban farms, food forests in public parks, natural buildings in the middle of the city, and community gardens in neighborhoods that lacked access to healthy, affordable food.  We crowd-funded a little over $43,000 online, got together a crew with the skills to organize the events, do the outreach, do all the media work, bring out the crowds, and facilitate the projects; and then reached out to a network of organizations and groups in each city to figure out the most potent community project we could bring folks from each city's show out to. Then we drove from San Diego to Seattle, to Jacksonville, Florida, to Boston, MA, and to 28 other cities in between alongside The Polish Ambassador's bus, and connected people at the shows with their local food justice, urban farming, and permaculture organizations and with community spaces where they could take real, tangible, in-the-ground action.

Adam: What did you do prior to working with David Sugalski (The Polish Ambassador) on this project?

Ryan: Prior to working with David, I was organizing a lot of guerrilla gardens, land-defense of urban permaculture sites, and other projects that combined permaculture and a connection to the land with direct action and movement-building. I'd studied and practiced permaculture design for four years before Occupy Wall Street happened and re-awakened a deep alignment I've always had with social justice and creating autonomous and just communities. In the years before the Permaculture Action Tour, I'd been working to do just that – create spaces in the city where people could re-initiate their connection to the land based in the interest of growing food, growing other useful plants and materials, and more than anything, growing the freedom that comes from that self-reliance and community interdependence.

Adam: What makes for a successful action day?

Ryan: A successful action day starts with finding the community of people or organization in a particular city or place that we want to be in solidarity with, that we want to steer large numbers of people towards giving their energy, time, and labor toward. Then we ask what their needs are, and what we can do that will most benefit them. Usually we're looking for projects that have a focus not only on ecological living but on social justice; projects that aim to make their education, produce, or whatever it is they offer as accessible to as many people as possible, especially folks who usually don't have access to these things. That's why we love planting edible forest gardens in public parks where anyone can harvest from the fruit, nut trees, and other edible plants; or working with an urban farm that gives all its produce to folks in the city who are interweaved with other struggles for their own autonomy and self-determination. Then, it's about bringing LOTS of people out, and effectively putting their energy towards functional action – as we say, permaculture is all about functional relationship. So we have to prepare the tools, the materials, the facilitators, and then when the folks show up, we interweave it all together and watch as 300 ants move about a piece of land building, planting, moving earth, and creating beautiful projects. Finally, it's about making sure there is a connection there that lasts beyond the day – introducing people to other people in their area who share similar passions and may want to start a new project together; introducing people to organizations doing amazing work in their city; connecting people to the land and initiating that relationship that so many of us have lost.

Adam: What projects will the Asheville Action Day be working on?

Ryan: We are renovating and giving some fresh life to an already sweet space – a little pocket park in Marshall, NC. We are also going to prepare some existing planters right on main street to start growing edible food for the community to share for free. Projects include: Turning parking spaces into a community fire pit, replacing existing planters and building new ones, planting Mulberry trees, clearing brush around the perimeter, plant ID on existing beds, planing fall crops/cover crops to prepare the soil for next spring, preparing beds for publicly accessible edible food next year (maybe even some Kale this fall), and enriching the soil with compost.

The TPA Permaculture Action Day: Asheville will take place this Saturday, October 10th, at 11am on Main Street near the courthouse in Marshall, NC. For more information visit the Facebook event page.

For tickets and information for Friday night’s show with The Polish Ambassador at New Mountain Asheville click here.