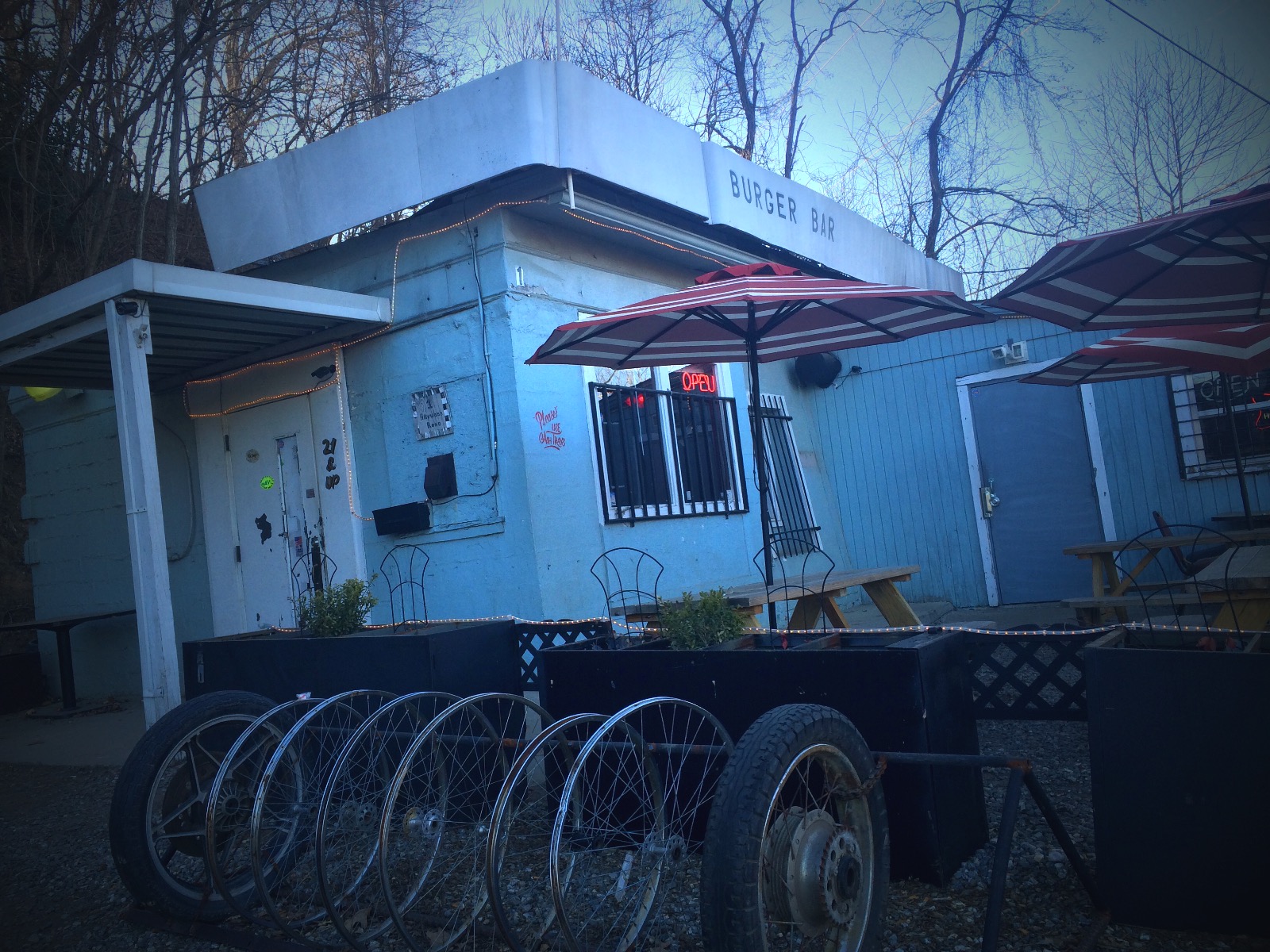 Drink Up
Right on the corner of Craven Street and Haywood Road is a pretty non-descriptish, light blue and white building you might know well or, like me, had never really noticed – even after living here 13 years.
Well, it’s the Burger Bar and many consider it to be The Oldest Bar in Asheville. It’s for sure one of the oldest. But they don’t serve burgers.
Last August my man and I were headed to somewhere in West Asheville and drove past it when it was closed, seemingly for good. We both talked about how weird it was that neither of us had ever been since it seemed like a bar right up our alleys – small, divey, off the beaten path, a little rough around the edges.
So I was excited to quickly find out that an old friend, Celeste Adams, and her boyfriend of 5 years, Chris King, had bought it and were preparing to reopen in less than a month.
Celeste, who’s a 3rd generation Ashvillian and West Sider for over a decade, had been a Burger Bar customer for years. She was working at the Double Crown when she found out that the owner of the Burger Bar at the time, “Miss Rita” Pinczkowski, was ready to retire and the wheels started turning. Both Celeste and Chris had been bartending on and off in town for years so they thought – why not take a chance on making the investment in becoming bar owners themselves and keeping a little piece of Asheville alive?

Celeste Adams and Chris King at the Burger Bar
When I start asking about the history of the place, Celeste whips out a binder where she keeps records and notes of what she has been able to find out from some preliminary research and a whole lot of stories. From what she’s gathered it was a service station from 1931 to about 1954 and became the Burger Bar in 1960, where it remained listed as a restaurant in the yellow pages for years. It’s a bit of a mystery as to when it actually stopped serving food, but Miss Rita took over the helm in 1993.
The place definitely needed some TLC, but for Celeste and Chris it was essential to maintain the spirit of the historic bar and not go for any sort of major redesign. They made some structural changes to the bar counter and other minor tweaks, gave the inside a fresh coat of paint, added some personal touches like local artwork by friends (such as Alli Good), and other random things here and there.
Chris described to me how at some point after taking the reigns from Miss Rita she gave them a box of old photos that revealed their new paint color choices were almost identical to the ones on the walls back in the day. This was an unexpected but super satisfying discovery for them.
“It really was more like we restored it to how it was rather than reinvent it,” said Chris.
They reopened the bar on September 13, 2014.

When I asked Celeste what one of her favorite things about the bar is, she said that it is really all about the special mixture of often decades-long customers and new regulars. “It’s ‘Cheer’s like’ - like a family. And, it’s one of the only working class, real bar rooms in town.”
It’s some of those loyal old-timers that have provided many of the more colorful stories about the “history” of the Burger Bar - another one of Celeste’s favorite things. She talked about the many tall tales told over copious drinks and how, “some of them make sense but I sometimes don’t know what to believe.”
She tells me about a man that often talks of a night back who-knows-when, where Dude A held a quarter in the air while Dude B tried to shoot a hole through it - taking part of Dude A’s thumb off in the process.
“Some talk about playing pool back in the 70’s but the pool room wasn’t added in until the mid-90’s”, she says laughing.
One of my favorite stories she tells me involves Miss Rita’s mom who was a bartender there before and after Rita took it over and her name was Lou Reed. Yep. Lou Reed. And there’s a very popular saying, repeated fondly by many – word for word – that, “If she didn’t cuss ya, she didn’t like ya.”
The Burger Bar has a steady schedule of music and events they plan on expanding on over the next few weeks as we shake off winter for good.
One of the more long-standing nights isn’t just for the ladies. It's Monday’s “Honky-Tonk Ladies Night" with Brody paying homage to and spinning the music of the female greats of Country and Blues such as Patsy Cline and Tammy Wynette. Celeste says the vibe is "low-key and intimate" and welcomes any women interested in performing to contact the bar directly.
Local darlings Krekel and Whoa! play every Tuesday, and Matt Schrader plays old school metal on Thursdays.
Each Saturday is Bike Night with John Black spinning 70’s rock and outlaw country, with pre-80’s bike competitions and part swaps.
But it’s the Friday nights when Old Fashioned Juke Joint Blues with The Rare Burger Band play that Celeste seems especially proud of. She says it’s a super soulful and special night where they play music from different eras– “like a true juke joint. There’s just really no other place in Asheville where you’re going to find that.”
No, the Burger Bar isn’t for everyone. And it shouldn’t be. It’s a straight-up, no-frills watering hole where you ain’t gonna find a craft cocktail anywhere and if the walls could talk you might not want to hear what they have to say. But if you’ve never experienced this little slice of Asheville’s imbibing history and it sounds like it might also be up your alley, it is most definitely worth a visit.
“You have to be a certain kind of person to want to come here, experience and appreciate it”, says Celeste. ”I know that when I go out of town I look for the little dive bars with bars on the windows because they’re where I want to go.”
Cheers.

The Burger Bar is open 7 days a week, 3pm – 2am on weekdays and now open at 2pm – 2am on Saturdays and Sundays. Live music and records start each night at 9pm. Outdoor patio is always open.
Mark Capra (“Foul Mouth Jerk” of GFE), and Emily Rose Bishop, who have all been friends collectively with Celeste and Chris since the mid-90's, help hold down the fort behind the bar.
Like the Burger Bar on Facebook