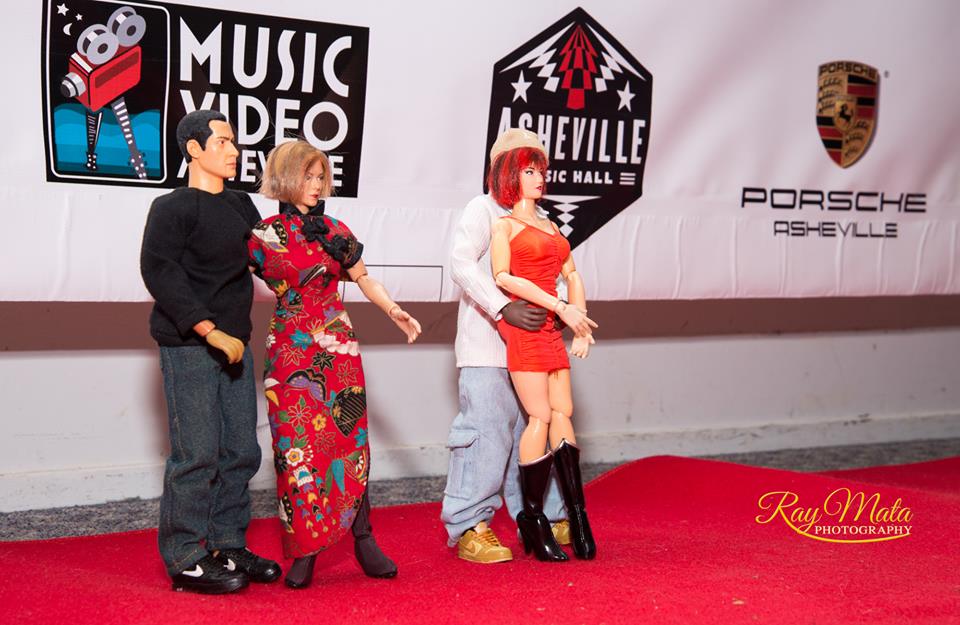 “Brucey B!” I holler across the street. My friend Bruce Bijesse of BomBassic is waiting patiently for me as I huff it up Biltmore Ave in my gold heels, sweating slightly, sucking furiously at my vape pen. He’s looking fresh, as per usual, in a blue button-up and newsboy cap.

We arrive at Music Video Asheville 2015, the 8th annual celebration of local achievements in music + film. A fanciful red carpet is laid out in front of Diana Wortham Theater where we pose quaintly for a half dozen photographers before making our way into the pre-party. AVL music people of all flavors and colors gather for the evening’s awards, dressed in their finest and funkiest. I make a beeline for the booze.

Wine safely in hand, a friend introduces me to Caitlin Krisko of The Broadcast and Indigo De Souza, both of them seasoned MVA nominees. Indigo, last year’s Best Soundtrack winner, is cool and silky in a slinky glittered dress, Caitlin fierce in a fabulous magenta lipstick that reflects her colorful personality. I make a note to have brunch with them both later. Oh goody, there’s Marley Carroll.

Last year’s Best Visual Design and Judge’s Choice winner ("Speed Reader”) is here for a quick chat before he has to set up for the after-party at Asheville Music Hall. Marley introduces me to the director of that video, Daniel Judson, a playfully sarcastic, good-time kinda guy. Both cultivated artists in their own respects, they exchange modesties in the success of the video. The only thing I can do with this interplay is to assure them they’re both talented and adorable, which they should already know. Suddenly we’re on the topic of rapper Mystikal, and I have to go vape forever and ever.

Eventually the lights start to flicker, signaling the transition into the theater. We are then treated to 90 minutes of select local videos, from hip-hop to space jazz to singer-songwriter sweetness and good ol' rootsy rock 'n roll. I am impressed by most, annoyed by some, wholly grateful for the incredible scope of creativity in this town.

I soon notice a certain name appears under 1/5 of these videos. After nearly plowing into a column in the lobby, I make semi-awkward introductions with Andrew Anderson, the eye behind Double A Productions. This guy seems to take very good care of the hip-hop and rap side of town, his cinematography soft, freshly-lit, and intimately representative of the Asheville landscape. When BomBassic wants to make a fly video, I suggest they call him.

After a lot of hijinks, the end of the night must come. Before the judges make their selections, we the people are invited to vote for our favorites via text. Yay, participation. Except I can’t because my jangly ass phone doesn’t let me have any fun.

AND THE WINNERS ARE...

The Moon and You with Dog Day Films

“The Rolling Baby Blanket of the Blue”

Crazyhorse & Colston with Double A Productions

“Let Me Heal You”

“Friday” (which you can check out below)

And if you missed the after-party at Asheville Music Hall, you missed out. Marley Carroll played his first original set in months, featuring a handful of delicious new songs and a remix of RBTS WIN’s “Mountain Child,” the vocals of which were performed live by Mr. Sexy Tattooed Honey Voice himself, Cliff B. Worsham. Well, I do declare!