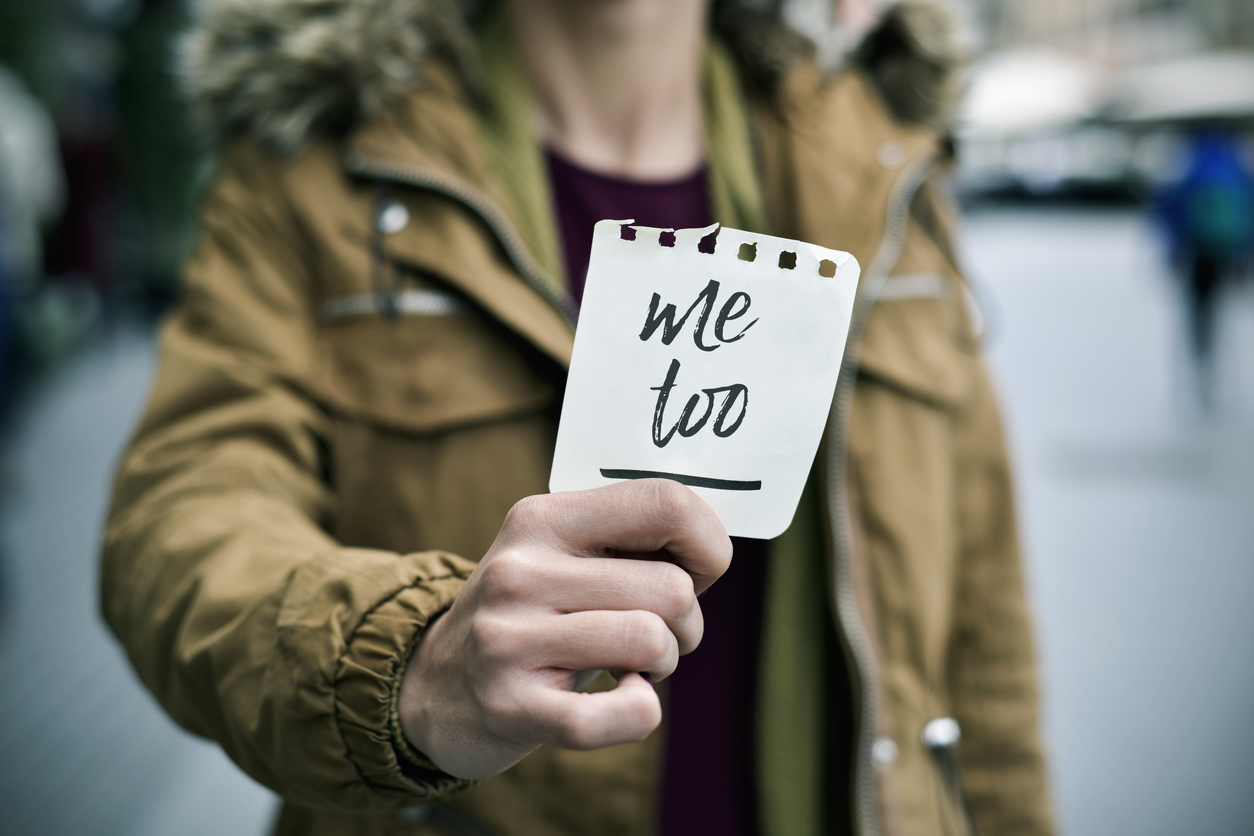 A watershed moment is upon us. And, as with any societal change, it's painful and it's dark and it requires uncomfortable reflection.

As we read the headlines that circulate, the unveiling of yet another sexual predator, many of us are reliving past experiences. They might be of an instance (or several) of sexual assault, shoved to the back of the mind and suddenly remembered—the man at the concert who stuck his hand down your jeans, the acquaintance who frequently touched your breast while hugging goodbye, someone who wouldn't take no for an answer when you rejected their advances. It may have been written off at the time, accepted as something that happens.

You might be thinking back to banter at a social gathering or in the workplace, questioning whether a line was crossed and if you were part of the problem. Did you laugh at a predatory joke that you shouldn't have? Did you let someone demean a coworker without speaking up? Did you dismiss someone's behavior with an "oh, he's just a creep, don't worry about him" sentiment? Did you turn the other way as your friend walked out of the bar with a woman too drunk to consent?

One thing is becoming abundantly clear: Misogyny and sexual assault are being thrust into the limelight, and we have to keep them there, even if it is uncomfortable.

"I'm shocked this keeps happening—that so many people I looked up to are predators," "not all men," and "don't look at me, I've never sexually harassed a woman," are common responses to the seemingly constant unmasking of sexual predators taking place right now. Just take a quick glance at a social media feed on the subject. It's true—for most men, the reality of what women have experienced is shocking. For women, and men who have been victims, not so much. It begs the question: What needs to come out of this?

Women and victims are angry. We are angry at those who prey on others to exert their power. We are angry at ourselves for letting things slide for so long, for taking an "it is what it is" attitude, for pushing thoughts and memories to the back of our minds. We are also angry at the truth of the voice inside that says even if we speak up, someone will tell us we are overreacting. And finally, we are angry at a society that doesn't allow women to be angry, lest we be viewed as cold or crazy.

I've been talking to a lot of women over the past several months, and a common thread has emerged: They know there are a lot of "good guys" out there, guys who are disgusted by what is happening, but they still don't feel heard. Though the men in their life may be sickened with the truths being exposed, the shock reaction feels self-aggrandizing, and it may be painful and inadequate to a woman who has lived with these hidden transgressions her entire life. Women and victims want guys to get it, to truly listen and go out of their way to understand, and to think about how their actions directly or tacitly disregard misogyny.

We want the good guys to know that whether or not they have ever sexually assaulted or harassed a woman, the sound of their feet on a stairwell will likely cause the heart rate of the woman in front of them to go up. She will clutch her keys a little tighter, hold her breath, and quicken her step.

We want the good guys to know that confident, strong women wear armor, day in and day out, and it plays a part in almost every decision we make: what car to get into, what road to turn onto, what time to talk that walk.

We want the good guys to open their eyes to the actions that are taking place around them. And once they are open, do not close them again.