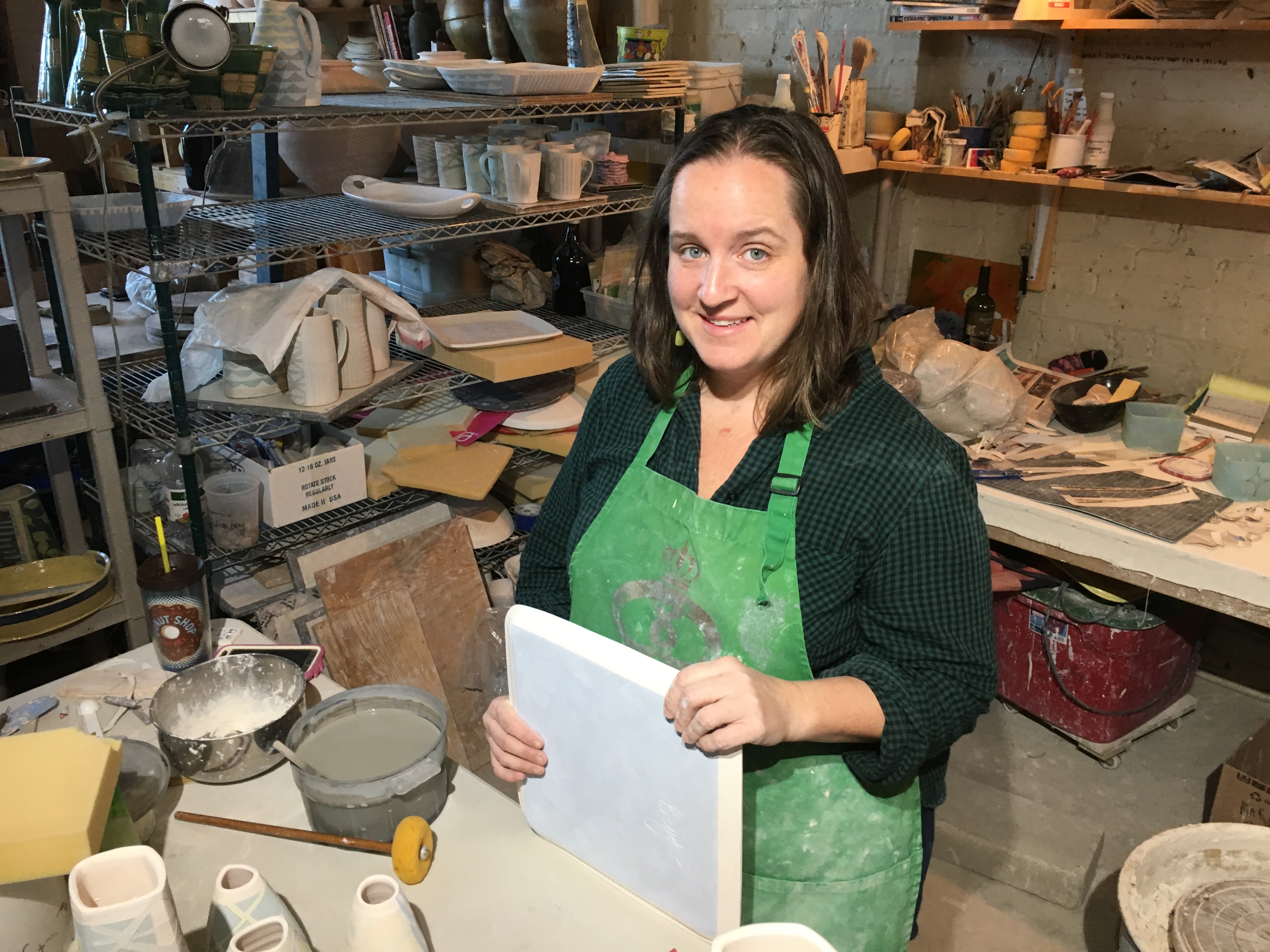 Let’s talk about bright sides, shall we.  While the very foundation of democracy may be crumbling all around us, the inescapable clatter has stirred many from a deep slumber.  For those sheltered by the soft downy blankets of white, middle class privilege, political engagement used to be a visit to the voting booth every four years.  But no more; now we know that democracy is fragile and not guaranteed. Like many of you in the past few weeks I have attended activist meetings in rooms designed for 50 with 150 people pushing through the doors, I have attended marches and rallies that electrified our city with the hope of resistance, and I have met with artists who never before considered themselves political but are no longer content to just sit quietly on the side lines.

One such artist is potter Kristin Schoonover. She organized the extremely successful Nasty Women exhibition in Asheville a few weeks ago that raised money and rallied support for Planned Parenthood.  I recently met up with her in her River Arts District studio located in the Clayspace Co-op.

“If I had to survive on what I make alone I could maybe feed myself and a dog…and the dog only sometimes,” Kristin jokes as she invites me to sit on a small dusty stool surrounded by shelves overflowing with vessels and platters in various stages of completion.

If you have been to the River Arts District you have seen her work.  She specializes in exquisitely designed functional ceramic pieces often stenciled with geometric patterns using layers of colorful slip.  Since 2004, after receiving a degree from Alfred University in 2001, she has maintained a consistent studio practice under the name Benyo Pottery.

With refreshingly honest candor (especially in this era of “alternative” facts) she admits the only reason she can afford to be a full time potter is because her husband works and supports their family.  They have two kids, Tessa (10) and Sammy (9).  She allowed me to interrupt her precious studio time (if her kids are in school, she is in the studio) to pepper her with questions about art and activism.

How long have you been a potter? With the exception of a six month stint at The Harlem Wizards last year it has been my only job (outside of parenting) since 2004.

What motivates you? I really like selling things; it makes me feel good when someone likes a piece enough to give me their hard earned money in exchange.

What is the highest compliment you have received about your work? I have never seen anything like this and I want to buy it.

What is your greatest influence, day to day, as an artist?  Instagram. I am influenced and inspired by what people are making and putting out there.  I am always looking for innovative designs, colors, and shapes.

What motivated you to organize the Nasty Women exhibition? Well, I couldn’t go to DC to march but I knew I had to do something…and then I read about the Nasty Women show at the Knockdown Center in Queens requesting donations from artists so they could hold a fundraiser for Planned Parenthood.  When I contacted them to offer my work they told me, you know what we really need, we need people to organize shows in their own towns.  And I thought…I can do that.

Was it easy to find participants?  Yes, it was so easy, within weeks I had donations from all over the country. We received a total of 108 pieces.

Was the exhibition a success? We raised over $6,500 for Planned Parenthood, so yes I think it was a success!

Did anything surprise you about the exhibition?  A lot of men came to the opening.  An older gentleman even tried to donate his work to sell. I had to turn him away though, explaining that this show is to feature women only.  He was not upset though and came to the opening with his wife. It was also great to see people from all generations here, teenagers donated work, older folks, everyone came out to support the cause.

Are you a feminist? Yes.

What is a feminist? Someone who believes in women’s rights.

What issues are most important to you and why? Women’s rights and LGBTQ rights are most personally important to me.  These issues affect the people closest to me, people I consider family.  Also my mom is a strong, outspoken woman and was always very active in the arts growing up. I think I learned a lot from her.

Has the Trump election changed the way you make art? No. I will keep making the work I make as long as people are buying it.

How did your kids react to the election? My kids go to a school that is about 35% native Spanish speaking and my son is in a Spanish immersion program, so they were really scared that some of their friends might be deported.

How did you reassure them? It was really hard. I tried to explain that we don’t know what will happen but I also confirmed that Trump is crazy and not a good person, so it could happen.

Do you think artists have an obligation to be political? No, not an obligation. Feeding yourself and your children will always take precedence.

Does art have the power to influence? Yes, I think so.  The Nasty Women exhibition in Queens is a good example. The work in that exhibition was more overtly political, specifically about women’s rights.  Those kinds of exhibitions impact people socially, they build camraderie and present issues in new ways.

What give you hope?  Protests, letter writing, Nasty Women exhibitions; people coming out to support causes they believe in. I used to think things were being taken care of. Now I don’t, and I know it is up to us to do what we can to effect change.