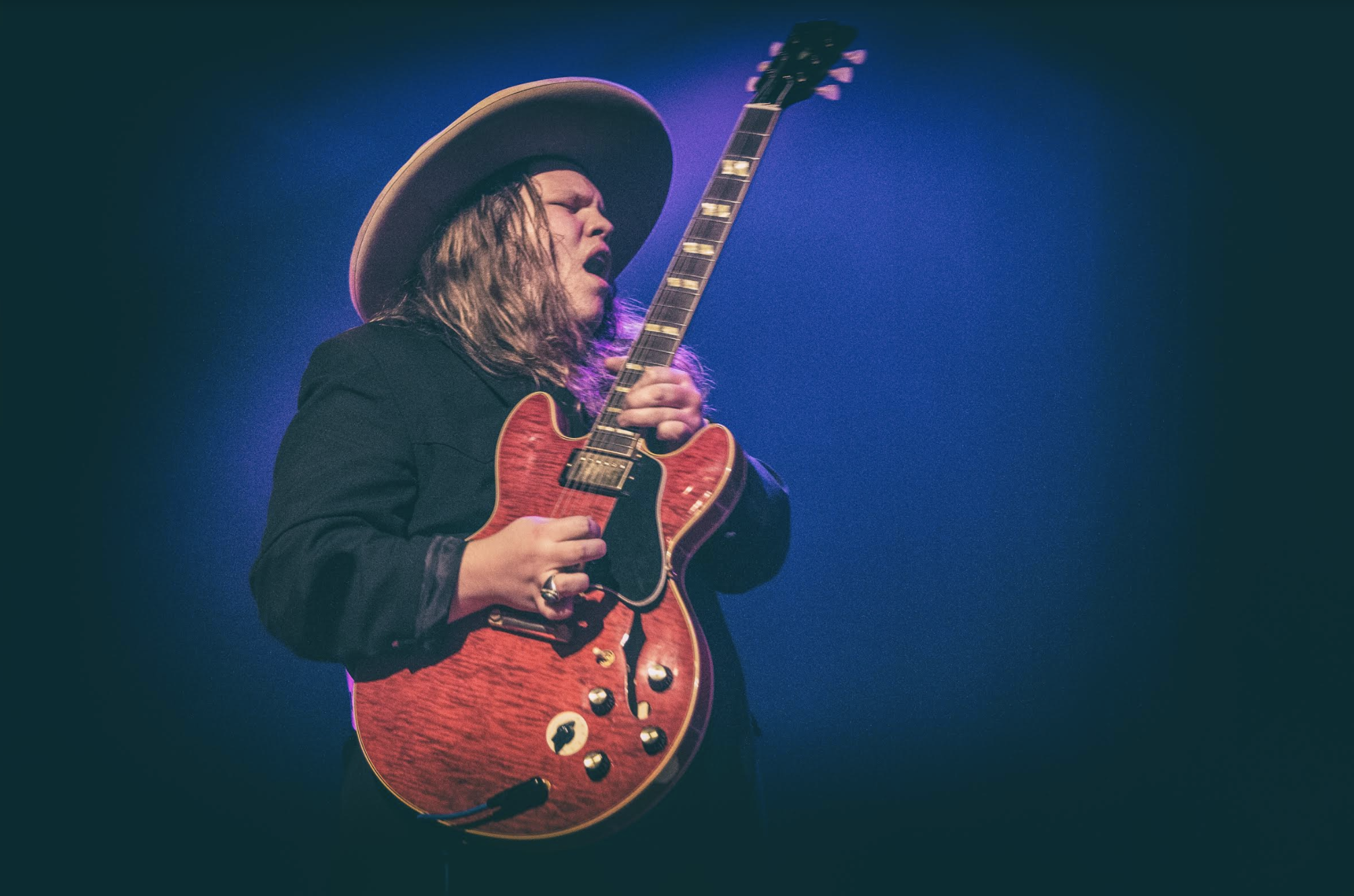 On Friday and Saturday (10/6-7), the lawn and outdoor stage at Pisgah Brewing will be filled with friends old and new. The Marcus King Band Family Reunion brings together musicians from the region in a lineup organizer Marcus King curated himself. It's a way for some of the best area artists to play together, but it's also an opportunity for something deeper: connection and community. Single-day and multi-day passes are on sale now for what's sure to be a beautiful early fall weekend out in Black Mountain.

The Marcus King Band will play one set each day (the second with some special guests helping them out). Other artists include Blackberry Smoke, Big Something, George Porter Jr., and the People's Blues of Richmond. A portion of proceeds from the event will go to two non-profits based in Greenville, SC (King's hometown): Cannabis Forward, which works to raise awareness of marijuana's medical benefits, and Mental Health America of Greenville County, a mental health advocacy, awareness, and service organization.

The impetus came from King's own desire to see more of the people he loved, according to the event's press release. King and his band have been all over the world in the last few years. Last year, they released their sophomore album, The Marcus King Band, which was produced by Warren Haynes. National media is taking notice of the group, as well: The Washington Post noted that "King is poised to be one of music’s next great guitarists-a virtuosic talent capable of playing blues, rock, country, R&B, soul and more."

I spoke with King while the group was in Germany finishing up a European tour about what he's been up to and what the Reunion means to him.

You've been on the road a lot this past year. What, so far, has been your favorite place to play?

Red Rocks with Warren Haynes was certainly up there among our favorites. There are a lot of venues where we really love playing, but being there for the first time was really a magical experience—to have a show there and be able to play with Warren. And all my family came out. Everyone came to see us there. It felt like a really big step for the group and it was a lot of fun too; there were no logistical nightmares.

This year it was definitely in our top five. Another one was at LOCKN' Festival. It was a really an eye-opening event; there was a special presence there and a sense of solidarity. We were so close to Charlottesville location-wise and those events had just happened, all of the terrible things there. So everybody was really trying to stand together and love one another, but that weekend it was especially important to do so. There were a lot of like-minded people standing up for the right thing, and there were such a large amount of people considering the small area. The energy was great.

What venues in Asheville do you love? Pisgah is fantastic—how did you decide to throw this festival there?

Pisgah Brewing Company has always been one of my favorite venues in the country, and the more I travel I find it's one of my favorite venues in the world. It's just got a very warm atmosphere, and there's a hometown feel to it. And Black Mountain and Asheville, that area, have always been  second hometowns to me. I used to come up there a lot at about age 15, I would drive up and do a lot of gigs in Asheville, so I felt that connection really strongly when we started planning the event. I'm really glad to do it there. And the natural architecture of the stage is a big part of the sound. It's incredible sound, and the people there are incredible. The beer is very good too!

Tell me a little bit about the festival and what you're most excited about for the weekend.

We're really excited about the Family Jam, our closing set on the second night of festival. We'll have a lot of special guests. My father will be there, and lots of local people from Asheville. The Brothership Horns, Alex Bradley, Simon George...Some really phenomenal musicians from Asheville and a lot of people from around, from all over the place, will share in the vibe.

Since you started playing music and performing so early in life, have you experienced any shifts in the way you compose, play, perform, or record?

I guess the best way to answer would be to say that all of us in the group agree that we try to grow musically and as human beings every day, no matter what we're doing. We do it inadvertently as well. You see more, especially when you're traveling. You see a lot, and it's crazy because we're all kind of in one concentrated area: our van. And all these things are going on around us, and we have smartphones now to see everything on the news, all the crazy things happening in the world right now, together. And it gives us a platform to stand on and promote the ideas of peace, love, and common sense at this point, ya know?

It's a great place to be as a writer. It's a scary time to be alive as a human being, but as a writer and as people who create instead of just being bummed out, we try to channel it into some form of creative output.

Can you tell me about the importance of vulnerability in your music? Many of your songs are very personal; how is vulnerability a part of your process?

Thank you for asking. It's a very big part of me. Music has always been therapy for me. At first it was just a way to get it out, and I realized that—and I'll try not to sound pretentious—but that people would appreciate it because they're going through the same hurt as well. It's nice to hear someone else is going through the same hurt. That was a reciprocation of it back to me. It kept me going, and I put more and more emotion into it. Music is a very vulnerable place, and playing live is a really vulnerable place to have yourself in as well. It's a conversation between yourself and whoever is listening. You've just got to do it, and if they don't care to listen or reciprocate, it's like talking to yourself.

Why is the emphasis for this festival so much on family?

Well, it's difficult to be home for any kind of anniversary or family get-together, so that's another reason why the festival is called the Family Reunion. It's my musical family, but the first day we're going to have a picnic for my family because I never even get to see them.

Benton [Wharton] from Pisgah has been kind enough to let us use the grounds to have a real family reunion. In the early stages of planning the festival, he hit me up because of some logistical things that didn't work out just right about a year ago, and he said, "We're here to help, whatever you need, we're really happy to be part of it." That gave me that sense of community that I've always felt in Black Mountain and in Asheville.

And a good portion of tickets are going to benefit two charities I feel strongly about in Greenville. One is Mental Health Care America of Greenville. Mental health and depression are things that don't get brought up enough or taken good care of. Mental illness is seen as something that's not an issue and it's swept under the rug. The other is Cannabis Forward, a great organization advocating for the medical properties of cannabis. Both are in Greenville. I feel at home in Black Mountain, but my real home is Greenville, so that's where the charities are coming from this year. It's my way of trying to share the love with 864.

What's next after the festival for you guys? What are you looking forward to?

We're really excited for the rest of our fall tour. We're finishing up on Halloween in Gainesville, Florida, and we're going to be taking a couple of weeks off and then getting into the studio in Memphis, Tennessee and maybe some other places and finishing up the record. So for the first time in a couple years, we'll have two months off to relax, work, and create. We start back just after Christmas for a New Year's Run. We're all really looking forward to the time off!

Tickets for the Marcus King Band Family Reunion are on sale now. The event kicks off on Friday, October 6 at 4:30 pm and ends at midnight on Saturday, October 7. 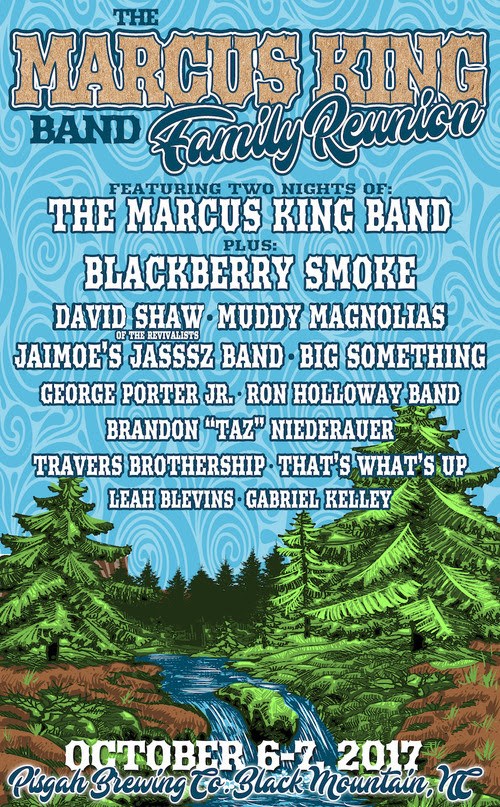