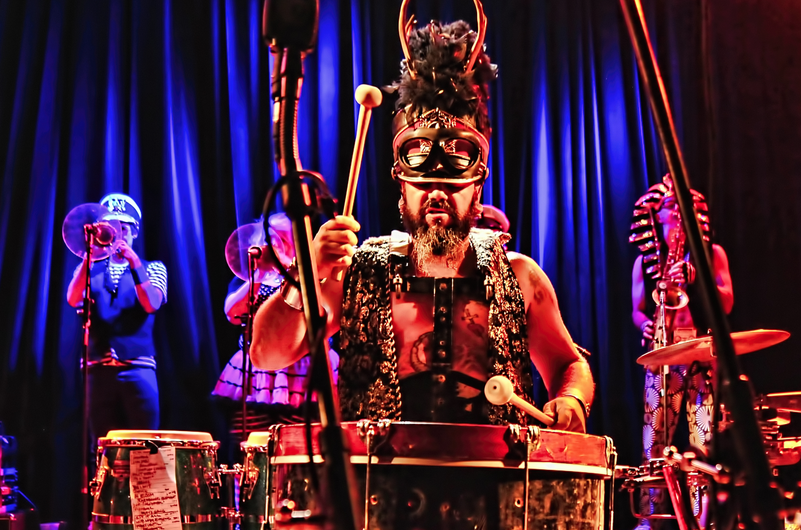 All photos courtesy of Andrew Wyatt

I first encountered MarchFourth! at the Fall 2014 incarnation of the LEAF Festival. Intrigued by the program’s description of a marching band and circus act hybrid, I made my way to the stage at which they performed, and proceeded to be totally dazzled by this group of highly energetic, incredibly skilled musicians and acrobats who seemed to be having a hell of a lot of fun on stage.

By the time their set was over, I was ready to join their circus.

MarchFourth! is back in Asheville this week on Thursday April 16, kicking off their Southern Tour at the Orange Peel (and fresh off of recording a new album in New Orleans).

An enormous group (30 current members touring in rotation, 17 on stage each performance) with a relentless touring schedule (About 110 shows per year, done in 3-4 week blocks), the group has the feel of a surreal carnival both on and off-stage.

Per Dan Stauffer, founding member and tour manager: “Breakdowns (like rest stops and fuel stops) are pretty hilarious events to be seen. Musicians break out horns and drum pads and practice, dancers will get out their hula hoops or do shoulder stands, some shirtless guys will be waving traffic around us for safety, me and the driver will be under the bus or on our phones. Lots of rubber necking in backwoods or heartland country roads! We have a sense of freedom and safety due to our large numbers. Our M4 freak flag is always flying, even though the bus is white and nondescript.” Beyond simply putting on a good show, Stauffer sees the band’s mission as being emissaries of positivity and joy: “I had a really yucky and unhealthy 20's. Somehow, I abolished my misery and simultaneously helped create this exuberant and joyful project in my 30's. It really is a kind of mission for me, a way to pay it forward as far and wide as I can. Our sacrifices are plenty (and so are the sacrifices of our partners and family), but sharing our little magic bus of surprises and fun and funky get down good times is sooooo worth it. Your smiles make our day!”

A band bio I read says you originated with a Fat Tuesday celebration in Portland. Did you (or any of the other founding members) have a particular tie specifically to New Orleans and/or to marching music?

"Our First show was a Mardi Gras/Chinese New Year Party (some years I guess they happen on the same day) called Chow Yun Fat Tuesday. Two of our first set of 7 covers were from the Rebirth Brass Band: "Let's go Get'um" and "Keep that Body Movin". We also had two members of the band who were raised in NOLA. I had lived in NOLA for 8 months in the winter/spring of 1998 and was definitely affected by the brass bands and culture of New Orleans. What an eye-opener for a kid from squeeky clean and conservative Orange County! I marched around with Crash Worship a few times and was religious about seeing the Rebirth at the Maple Leaf in their weekly show, I survived a Mardi Gras working and partying insane hours, and a Jazz Fest too. This place is almost too much of a good time. Almost. - Do you all have a favorite city/event/place to play? I think we keep adding to that list. One thing about this touring lifestyle, you become a connoisseur of clubs, events, festivals and towns. New Orleans is super exciting. All the horn players run around and sit in with other bands. NYC is the same, a town with great and accessible night life. We play in Colorado more often than any other state and its hard to beat playing outdoors in Telluride Valley at Brews and Blues, or The Mishawaka. I must say the LEAF Festival could give them a run on the outdoor beauty scale. We were told we should play Asheville long before we made it there. Now I can see why, beautiful and lively town with great bars and restaurants, and art and nature. The Orange Peel is a real gem too, with its big open feel. We're happy to be making new friends in Asheville for sure!!"

What would you credit as the band’s influences (musically, and/or any other art/performance medium)?

"Well, the list of influences would probably be unique to each player, but if you were making a musical cocktail I'd through in some NOLA Brass, Brazillian Batucada, Count Basie big band sound, with healthy jiggers of funk and pyschedelic rock. The performance side is definitely influenced by th re-emerging burlesque scene, circus elements of stilt walking etc.. and some kind of go-go flash mob radicalism."

Did your shows always have such a strong visual component, or did that evolve over time?

"We have always had a visual component. Marching costumes, stiltwalkers and dance pieces have been around since day one. I think that costumes really help performers (and audience members--hint hint people) shred their mundane preoccupations and reservations. Remember this is Mardi Gras all year! "

The band is, well, huge (30ish active members, 100ish alumni). How big was it when you started? Was having such a big group intentional, or did it just grow organically over time?

"It was awesomely too big to start with! Our first show had more drummers than horn players (not such a good idea), we had 35 people for our first round the country tour that lasted 8 weeks. We were more like a food and booze seeking pirate ship than a touring band. Since then we acquired a great booking agent and tour year round, so we have pared down to a manageable set roster of 7 horns, 5 drums, 1 bass player, and 4 dancers =18 performers. We need to have subs as we tour extensively and life happens, ya know (for instance I'm getting married this summer and going to Europe!). These days we are a big band with a big sound, but no larger that your average 14 piece afrobeat band or big band. We are tighter and funkier than ever but still carry the spirit of the 100 person entourage our history has been."

Do specific tours follow any sort of central theme, or is it more focused on just playing what feels right for the band?

"John Averill, (bass player and bandleader) changes the set every time we play. In fact he keeps all the old set list to make sure that we play different pieces each time we show up to a city. When we hit Asheville, ya'll better watch out. It'll be our first show after recording for 10 days. We have new songs and we will be all tight and ready to shred freely after being in front of a mic all week. How's that for a theme?"

MarchFourth! plays the Orange Peel on Thursday, April 16th, and promises to be a show not to miss.