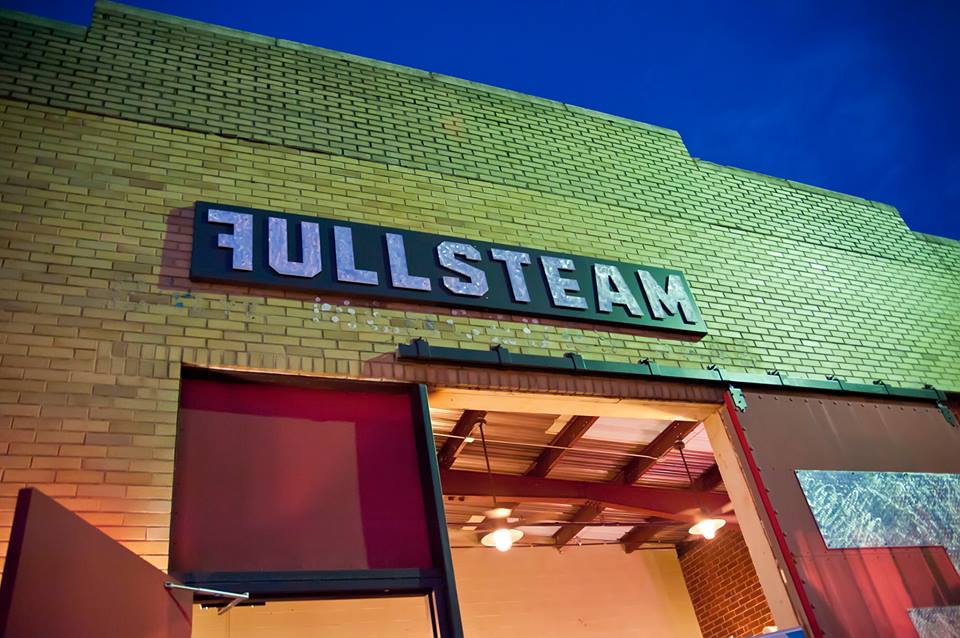 I recently moved to the Triangle area to accept a cellar position with Mystery Brewing Company. What does a newly relocated Cellarman and Beer Writer do when finding themselves in unfamiliar territory? Well, we go on a beer tour, of course!  I gathered the gals from the Mystery team, hopped in my pickup truck, and took off to sample the beers and meet (did you have any doubt?) the women behind them!  Brittany Judy, Office Manager, and Jessica Arvidson-Williams, NC Sales Rep, were more than happy to go day drinking with me on a gorgeous Sunday afternoon! 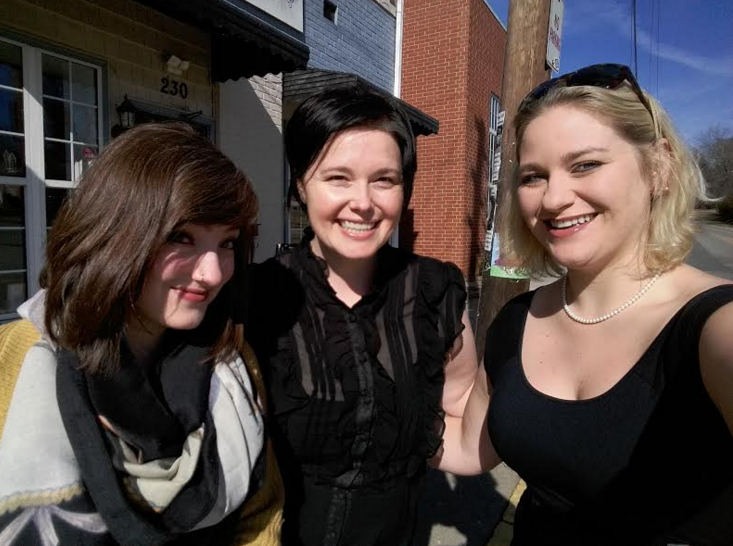 The gals of Mystery Brewing (L to R: Brittany Judy, Anita Riley, and Jessica Arvidson-Williams) hit the road for a Triangle brewery tour

Disclaimer: There wasn’t time in a day to get around to all of the breweries in the Triangle that have women in leadership and/or production roles. I have my work cut out for me down here! It certainly isn’t close to all the breweries the Triangle has to offer. 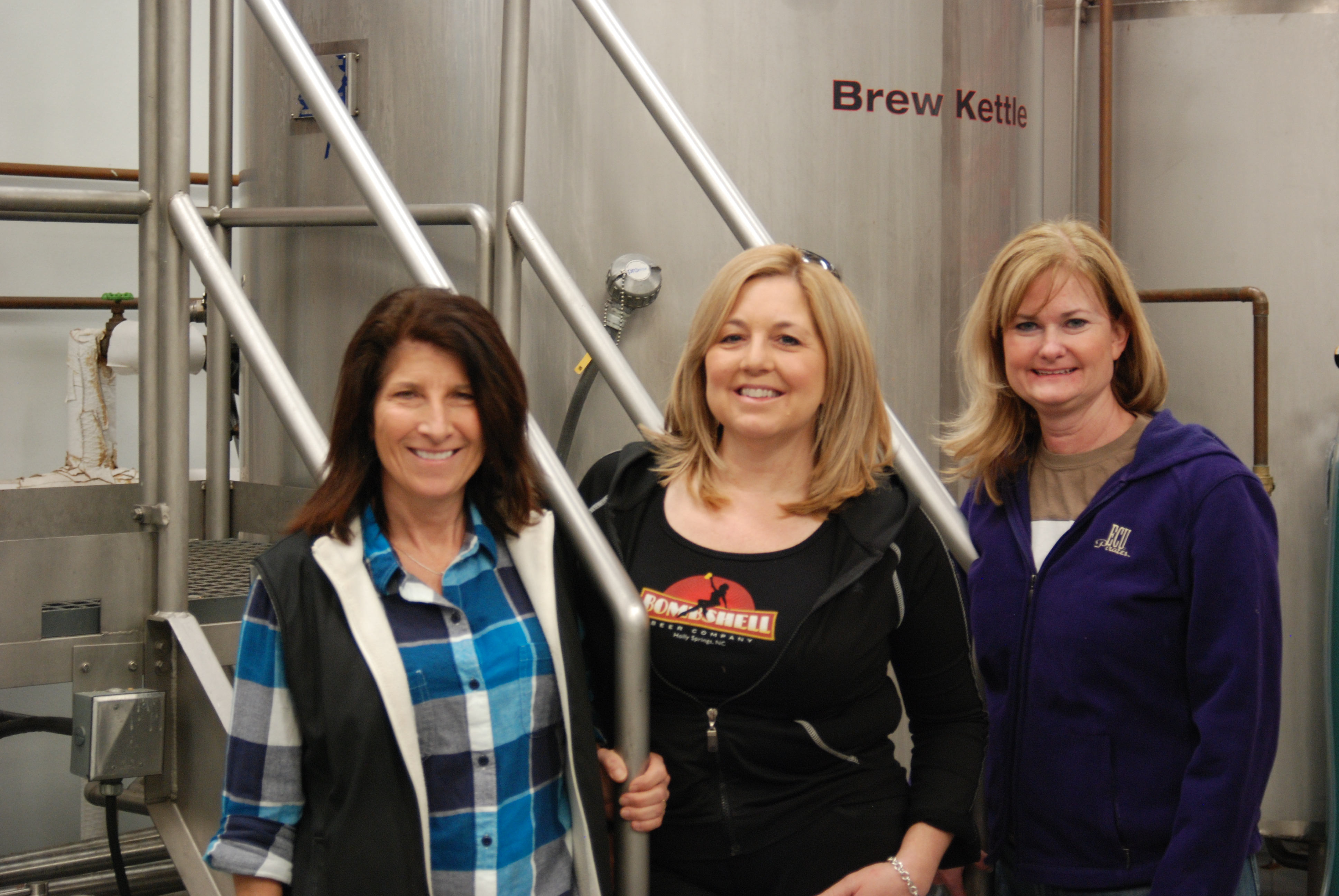 This is a 100% woman-owned brewery in Holly Springs, NC just south of Raleigh. I caught up with owners Ellen Joyner, Jackie Hudspeth and Michelle Miniutti on the heels of their second anniversary party, and just as the brewery was preparing to begin canning their beers for distribution. They got their start as homebrewers while they each worked in the corporate world.

These women bring their experience in marketing, sales, and product management into their jobs as brewery owners. Each of them is deeply concerned with the quality of their beers, and wants every interaction with their brand to be the best it can be. Michelle recounted the decision to stop making their most popular beer, a pilsner, because of quality concerns. “It came down to opportunity costs,” she said.  Because this lager style takes longer to ferment than ale styles, they weren’t making as much of their other styles as they could. Bombshell spent some time taste testing a cream ale with their regular customers, and found that the similar flavor profile was well received in their market. The Starlight Ale was born!  Even though they were all nervous about making the switch, the brewery is better off for being brave and taking the chance. They admit that making tough decisions can be hard, but the end result is worth it.

“I love seeing people having a good time and enjoying our beers,” Jackie said. “Even though decision making can be difficult at times, we know that it’s because we have a great brand and everyone in the room wants what’s best for the company.”

“You want to come to work in the morning,” Ellen added. “Plus, I don’t have to wear suits and heels anymore, either!  I had to put on heels for Christmas, and I almost fell off of them!  It had been that long since I’d worn them!”

Michelle’s favorite part of brewery ownership is being more hands on in the community. “We are able to host fundraisers in our space and give back to the community in a more personal way.  In the corporate world, we did a lot of high level philanthropy, but we rarely got to meet the people we were helping.”

Bombshell has just launched distribution of cans around the local market.  “But,” Michelle said, “Growth for the sake of growth isn’t what we are after. We want to grow at a pace that allows us to continue to focus on quality, ensuring that we are putting the best possible packaged product into the market.”

“We work hard,” Jackie continued. “We want to have a good product to show for that hard work.” 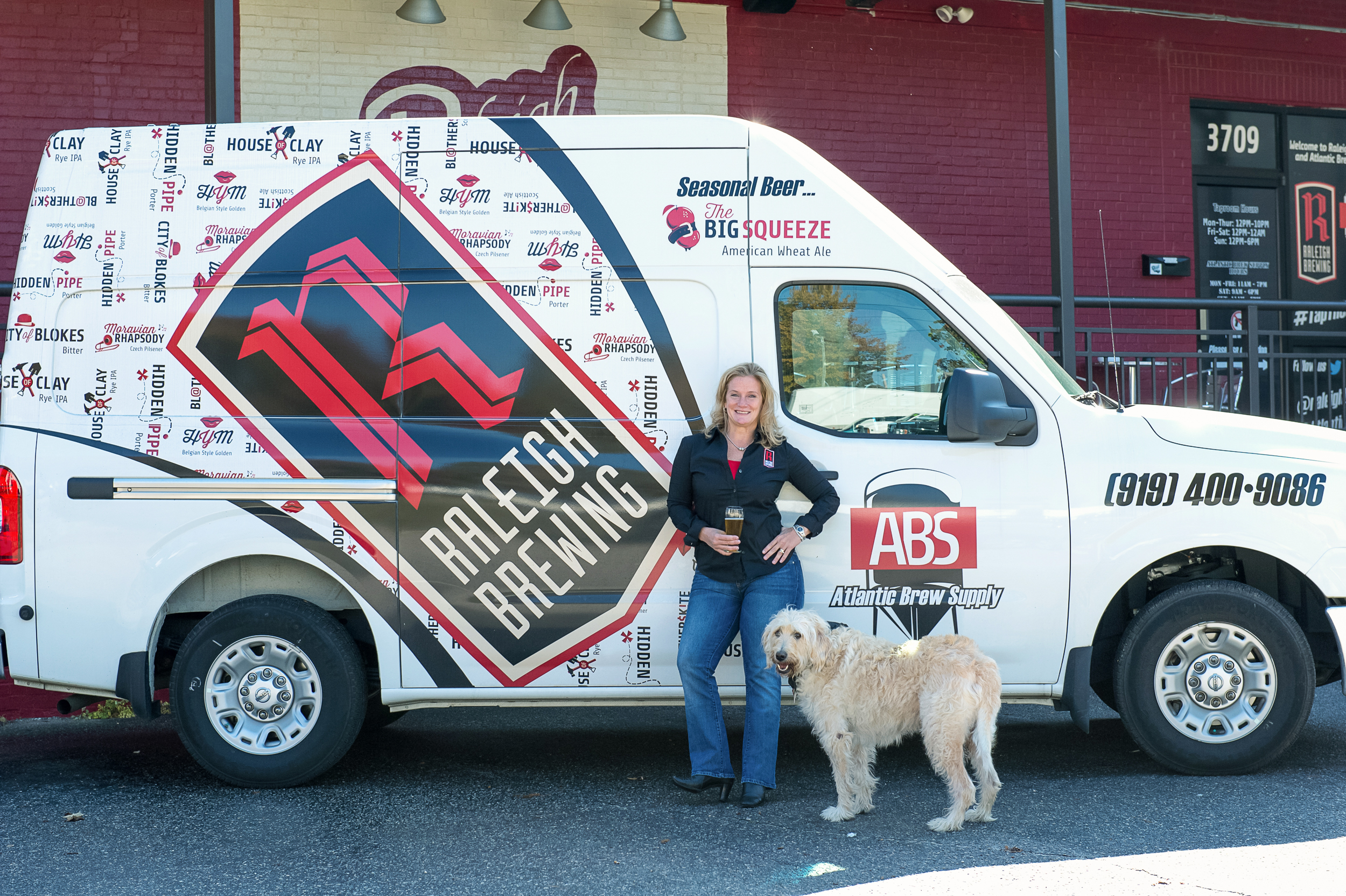 I met up with Kristie Nystedt just after the weekly Sunday afternoon yoga class at the brewery. She and her husband Patrick opened Raleigh Brewing Company in March of 2013 on the heels of opening two other businesses that they still operate.  They Nystedts opened Atlantic Brew Supply (ABS) Commercial, which wholesales commercial brew systems and tanks to breweries in September of 2012, followed quickly by Atlantic Brew Supply homebrew shop in December of the same year. They have now grown to be the largest homebrew supplier on the eastern seaboard!

Kristie says that she and Patrick had always talked about opening a nanobrewery in their retirement.  But when her company announced a double merger at the same time that Patrick’s company declared bankruptcy, they decided that their dreams didn’t need to wait any longer.  They have two daughters that were about to enter college at the time, and suddenly what seemed risky from the comfort of secure jobs seemed like the least risky thing they could do. “No one had time to dip toes into the water.  We went in with both feet.  We knew that the excitement around craft beer was growing, and the time was right.”

I was enjoying their most popular beer, the “Hell Yes Ma’am,” a Belgian Golden Ale. “This is the beer that I helped create,” Kristie tells me. It’s the only style she insisted that they carry from the beginning. So, when the guys presented the initial line up of beers that they proposed as their core brands, Kristie immediately said, “Where’s the Belgian Golden?” The only proper response was, “Hell yes Ma’am.”  The guys challenged Kristie to come up with the recipe, which she did.  She designed the malt bill, the hop character, and chose the yeast that make up this unique, high gravity beer.

I asked Kristie if she had experienced any advantages or disadvantages by being a woman in a male-dominated industry. “If I have, I haven’t noticed,” she said. “I don’t play that card. I have too much on my plate to get wrapped up in that sort of thing. If I run into any push back, I just tell them that they might want to try the beers now. People are usually a lot nicer after a beer. I’m more interested in being a part of the community.

"I want to help Raleigh grow to be the city that it wants to be. I just want to add a small grain to that,” Kristie says of her involvement with several economic development boards and merchant associations. 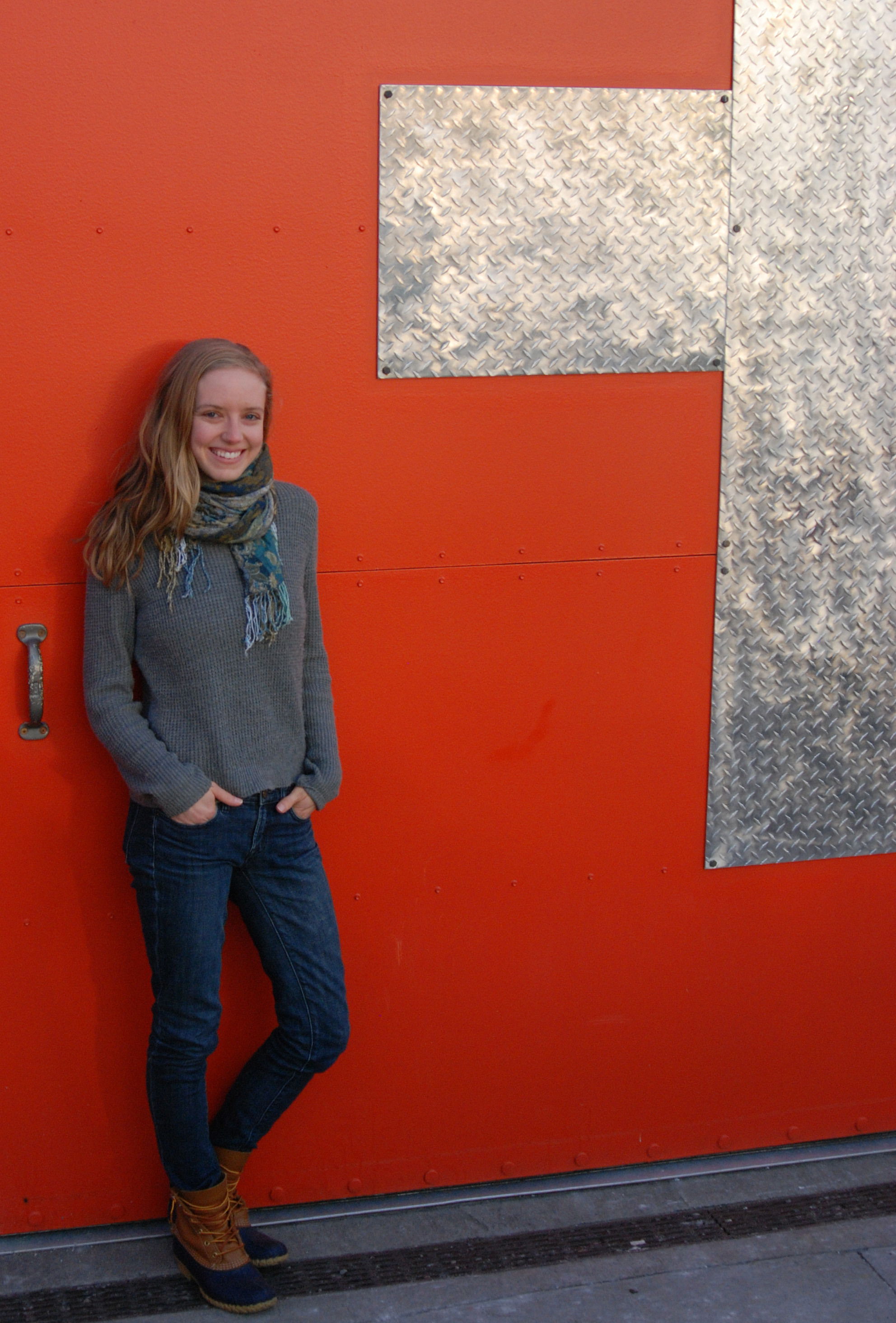 Amanda Richardson is a brewer from from New Hampshire, though she first discovered her love of beer while traveling in the Czech Republic. She started her career in the beer industry at Brooklyn Brew Shop, orchestrating assembly of gallon kits and brewing on a small scale for events. When she relocated to Durham a couple years ago, Fullsteam’s Plow to Pint model spoke to her. Fullsteam is dedicated to locally sourced ingredients, and endeavors to support local agriculture in post-tobacco North Carolina.

Amanda had already been brewing with local ingredients she found at the farmer’s market, and Fullsteam offered the challenge of scale. “It’s harder than people think. We have to get a large amount of quality ingredients to brew a la batch. It has to be feasible on our system, and then what if it’s a bad crop that year?  There are challenges all the way through.” The flip side of the challenge is the reward of getting to interact with the people in the community when they bring ingredients to sell to the brewery.

Amanda points out another perk of working in the brewing industry: the people that it attracts. “We come from so many backgrounds, it makes work more dynamic,” said the brewer who studied neuroscience in college!  She admits that the combination of science and creativity that goes into beer production was a main draw for her entering the field. “It’s like I’m providing therapy for the yeasts!  We make sure that their needs are met, so that they can do the work that they do. We are like yeast social workers!”

Mary Beth Brandt, Fullsteam’s General Manager, joined the conversation. She started out volunteering “doing stuff” with Fullsteam before they got the brewery up and running.  Sean, the owner, asked Mary Beth for her resume, and a few months later she was hired on. Over time she worked her way to the position of GM.  She still defines her job description as, “doing stuff; whatever needs to be done.” She encourages anyone seeking a position in the brewing industry to keep searching until the right opportunity comes along. “If you’re really interested in beer, don’t be afraid to get out there and find a company that will give you an opportunity. You may have to start in one position before you transition into the role that you really want.”

“There’s a lot of education out there,” Amanda adds, “but there are still apprentice routes that could be beneficial to some people.”