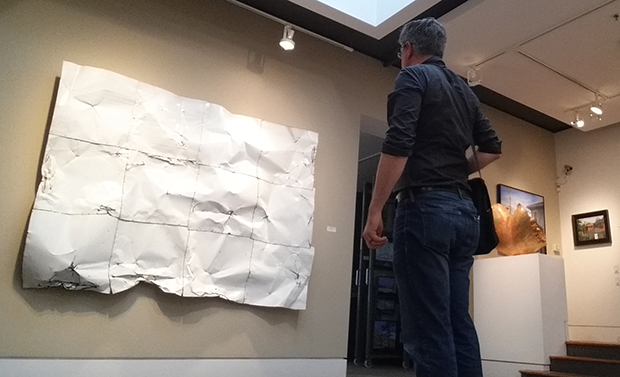 I’m on my lunch break, and I think I’m having a panic attack.

Despite its proximity, I don’t get to downtown Asheville much, but the May weather makes the area irresistible. I work on Tunnel Road; I can leave my office and park at the civic center lot within ten minutes. On those occasions, I use my lunch break to stroll to my favorite haunts.

I have works in ZaPow!, Gallery MIA, and Downtown Books & News, so I stop in to check the inventory. (Visit these locations, buy my material, finance The Deputy’s toy hording). I go to the library and browse the periodicals. When the weather is perfect, I like to hit the soda and candy section of Mast General Store for a lunch of deplorable nutrition. Carrying a glass soda bottle on the sidewalks makes me feel like I’m in a TV commercial, especially if the music from Harvest Records is good.

My walking loop takes me by some of the galleries too. The farthest point in that walk is Blue Spiral 1, and I hadn’t been inside since last year.

As a habitual creature of habit, I always move through Blue Spiral along the same mental route -- the gallery’s ground floor first, then the bottom floor, then up to the top. So, this day, I mount the upstairs landing and make two right turns, past a self-portrait set in an art studio, a series of small suburban oil pieces, and free-standing sculptures. I stop to look at them all. I was a painting major in college many moons ago, and I look at how the materials are applied and how the artists create the illusion of light.

Most of what I see strikes me as craft. That’s not a dismissal. I always hope for a jolt of rapport in each display. I don’t expect to see it all the time. It’s a rarity by its nature. It depends on an alignment of the artist’s intent and the audience’s associations. Because it can turn up in any corner of a museum or gallery, I try to see everything. Everyone’s responses vary. The piece I just glanced at might stop dead someone else. You never know.

Here, though, I don’t feel anything beyond admiration for the technique, particularly on the oil paintings. I was horrible with oil. My stuff looked like swamp monster selfies. These works pop with color, and small, precise brush strokes. This person knows what they’re doing. Of course they’re in a gallery.

I leave these pieces and turn into corridor split by a free-standing wall. On your left are paintings, on your right are more sculptural works, including a human head burdened by a giant crown made out of silos. I circle this a few times, grinning at the temerity of it. It’s solemn and ridiculous. I love it a little.

As I finish the last lap around that piece, I glance at a flag of white along the far wall. It’s shiny and distorted. Big too. I give it a proper look, and I see this sheet of metal with its rivets, scattered absences of paint, and dents and warps. A slow gasp bolts me upright, and I shuffle toward it, eyeing its uneven borders. I center myself in front of it, maybe 20 feet away, and I can feel my heartbeat fill my ears.

It looks like nothing else but ruined fuselage, a shred of salvaged aircraft from a TSA recovery hangar. It terrifies me.

A lot of luggage quickly surfaces. I’ve followed the Germanwings tragedy in as much detail as I could stomach. That reminded me of EgyptAir 990, a deliberate crash off the New England Coast in 1999, and that reminded me of TWA 800 in ’96 which fell apart shortly after takeoff, also over the ocean. I Googled them and fell down a wretched rabbit hole for a few hours. Horrible stuff, the stark vulnerability of the passengers and the corruption of everyday technology. Also, in two of those events, outright evil. The stories – these crushing stories -- buzzed in my skull for weeks now, and they had just started to fade until today. Until I looked up. Until this art.

I couldn’t tell you when they installed this piece. It wasn’t here the last time I visited, but now the two of us stare at each other. It’s called Topography by Hoss Haley. It’s huge. Almost five feet by eight. It’s off-white, broken into a grid of brown with jagged black poking through. It looks like it weighs a ton. Go ahead, look at the card on the wall next to it. Find out what’s it made out of. Ready? Washing machines. Haley wrenched the panels apart and nailed them together.

I take a step back and look at it again. Washing machines. The piece seems awfully benign after the initial shock. It could be a quilt. Or an arctic map. I made it a plane crash. I can’t tell you what Haley intended to say with this. But once the thing is done and displayed, I can tell you it doesn’t matter. What matters is what all of us walking by carry in our head pockets.

Within a minute, I start to laugh at this unscheduled lunchtime catharsis when I was only hoping to stretch my legs. Here’s the spark I look for, and it clobbered me. I barely give the rest of the pieces in the gallery a second look as I walk out. I’ll see them later. I’m still reeling from the art drive-by, and I make my way back to the car and then to my work desk, mere miles and worlds away.