The Legend of the Boojum

The Legend of the Boojum 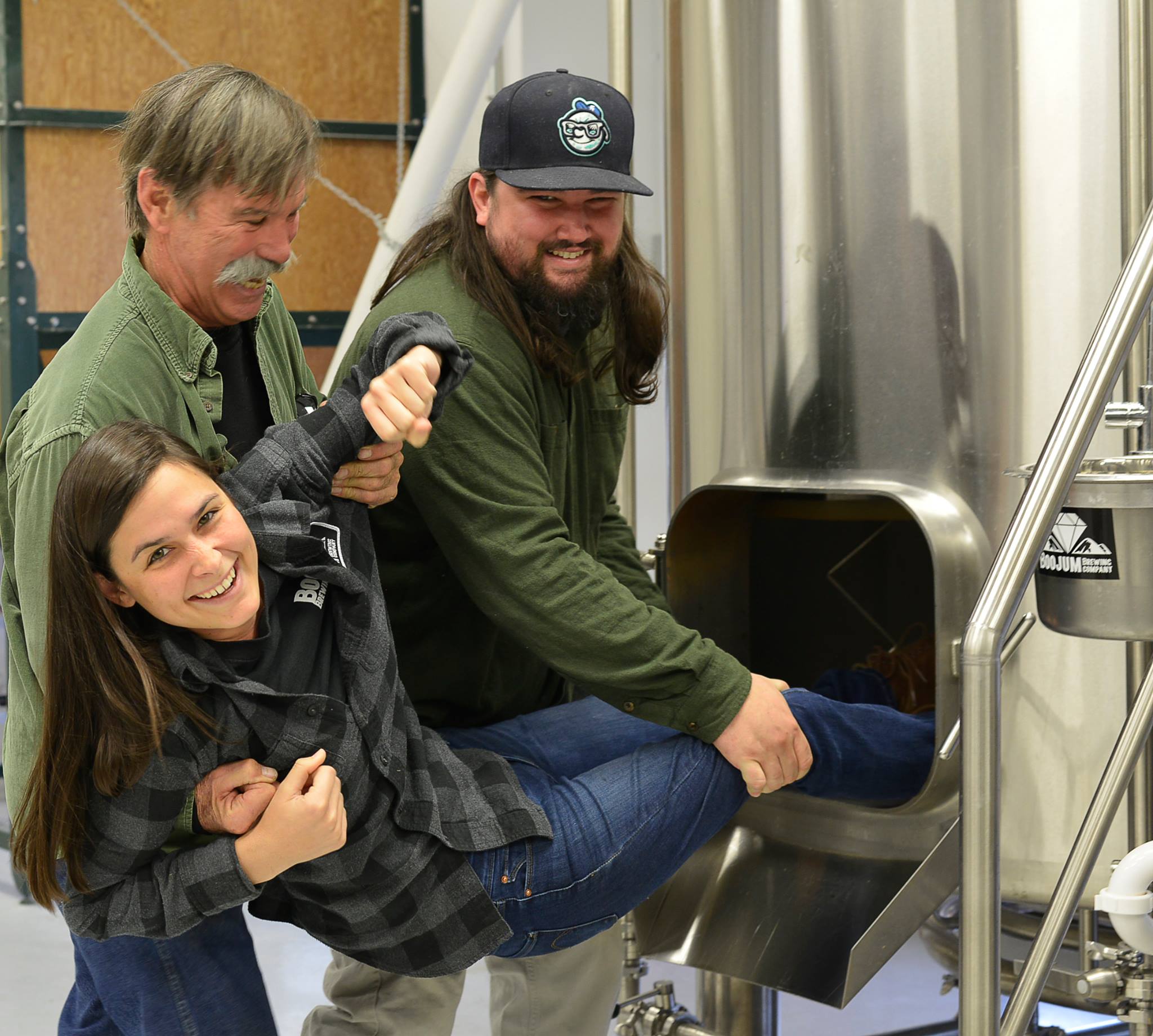 There are mythical creatures that live in the high hills surrounding Waynesville, NC. You may not see them, as they rarely leave their cozy den, but their presence is felt across WNC by many a beer lover. I am speaking, of course, about the brother and sister team behind Boojum Brewing Company. Kelsie and Ben Baker discovered their mutual love for brewing while they were on opposite ends of the Eastern Seaboard. Ben was working in a nuclear power plant in Florida. His sister Kelsie was an environmental engineer in Boston. Neither of them knew about each other’s love for brewing until a family gathering, when they each disclosed that they wanted to leave their professions and start a brewery. It only made sense to them to start one brewery together. I had heard about people like this – people that actually enjoy the company of their family members for eight hours a day, every day – but I had never met any in real life. Most of our interview went like this: Kelsie and Ben laughing and getting along while I cocked my head to the side with a look of bewilderment on my face.

I was even more surprised to find out that their parents and aunt and uncle are also involved. On the one hand, it makes perfect sense that the two need reinforcements to pull off such an undertaking. On the other hand, the three ring sideshow that I have come to know as family dynamics make this all the more unbelievable. But given that they are celebrating their first year in business by adding a line of canned beers that are being distributed across WNC, ramping up production to keep up with demand, and trying to figure out how to expand their taproom and restaurant to accommodate the influx of visitors, I decided to suspend my disbelief and just go with it.

“You know your family, so you know what to expect. You know what each other’s strengths and weaknesses are, and how to work together as a team for the best result,” Kelsie says. “It can be hard to separate work from family life, so sometimes we find ourselves at a family picnic talking about work when we should be relaxing,” she counters.

“I think it’s awesome. I wouldn’t have it any other way,” Ben insists. “There will be fights, but you’re family, so you get over it. You can’t just get rid of your family members, so you have to find a way to make it work.” And they have.

Kelsie, 27, handles the day to day operations of the brewery. She schedules the brewing, orders ingredients, helps brew and package the beer, and does some of the cellar work so that Ben, 28, can focus on the brewing and making the beers the best they can be. “There are so many good breweries out there, that we have to focus on quality,” Kelsie says. And this brewery has already garnered a lot of respect from the local brewing community.

Kendra Penland, Director of the Asheville Brewer’s Alliance, had this to say, "Boojum Brewing is a great example of how our Asheville Brewers Alliance members and their products can be so distinct, but do such a solid job of knowing who they are as a brand and focusing on the customer experience, that success naturally follows. I think that's why so many breweries not only coexist in our region, but see the value in collaborating with and supporting each other - everyone wants to make great beer their way, and they want to see others do the same thing. It elevates everyone in the industry, so everyone wins."

“We are excited to grow, and we want to take our business as far as we can,” Kelsie says regarding their future plans. “We are looking forward to seeing our cans in bottle shops and grocery stores, but we also want to grow sustainably.  We are focused primarily on Western North Carolina right now, from Asheville west.  We plan to grow as fast as we comfortably can without sacrificing quality.” Having said that, there’s a lot of change coming for the brother-sister team in 2016. Boojum’s King of the Mountain Double IPA just hit the shelves in cans in December of 2015. Both Graveyard Fields, their highly coveted Blueberry Coffee Porter, and Reward American Pale Ale will arrive in February. Mûr, a Raspberry Saison, will arrive in the Spring. “It’s so hard to decide which beers to focus our distribution efforts on. Ultimately, we went with the ones that people asked us for the most.” Even as they continue to grow their staff, they are keeping with the theme of family and close, close friends. They’ve hired their friend, Keller Fitzpatrick, who has literally been friends with the Bakers since they were babies. Keller is heading up the barrel aging and sour program at Boojum. Cody Noble, who attended the same high school. is also a recent graduate of the brewing program at Blue Ridge Community College in Brevard.  He has already come up with some great beers like our Chocolate Peanut Butter Stout & Jalapeño Wheat IPA. Elisa Tathum, a longtime friend from Kelsie’s days in Boston, also worked as a distiller for Blue Ridge Distilling, which makes Defiant Whisky, before coming on board at Boojum.

Boojum is currently working on developing new recipes and experimenting with new techniques. “We come together and decide as a team how we want the beer to taste, then Ben makes it taste like that!” They are also isolating yeast strains from the local flora and using that to ferment beers. Part of the fun for Kelsie and Ben is keeping the lineup exciting with special releases and new flavors.  At the time of our interview, they were most excited about their Galaxy Far, Far Away IPA that they made for the release of The Force Awakens. They used Millennium, Falconer's Flight, and Galaxy hops to create this English Style IPA. You could tell that they were both huge fans of the films by how excited they both were about this beer. I could start to see why they worked together so well by focusing on what they agree on and staying true to themselves. I could tell that they were both on the same page when I asked them what their loftiest goal for the brewery is. “To make the ultimate IPA,” Kelsie said.

“The best IPA EVER!” Ben echoed!