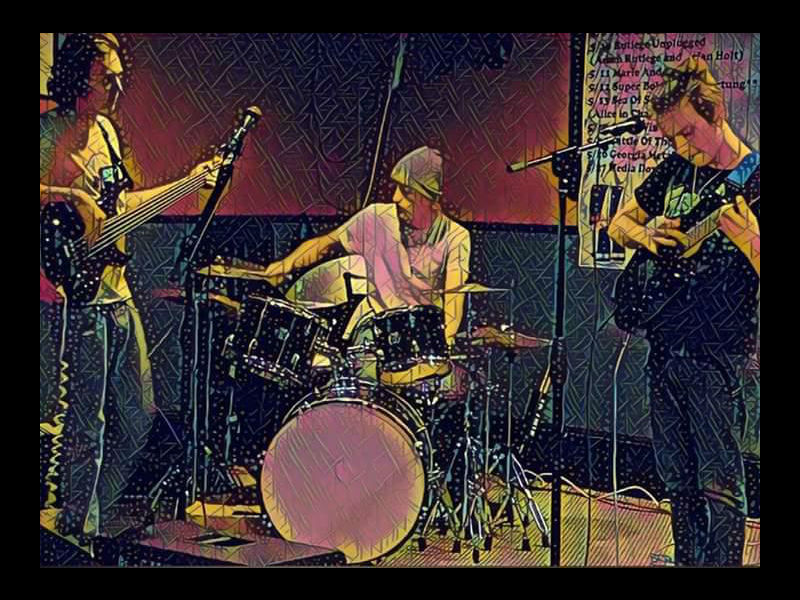 Oh what tangled webs we weave. True story: Sometimes those webs catch something completely different than we were counting on. So it is for me with the band Kusa and the seven-string stylings of Brendan Bower.

This Sunday evening, New Years Eve to be exact, Bower, Tyler Craighead, and Nash Thomason will be bringing the surprising and dynamic prog-rock of Kusa to the Sly Grog, an exciting and fitting first opportunity to introduce themselves to the Asheville scene.

Founded in Roanoke in 2014, Kusa was not always math-rock. In fact, early on it wasn't really much more than an opportunity for some good friends to get together, fire up some ganja, order a few pizzas, and bang around on some instruments that, self-admittedly, they didn't even really know how to play at the time.

"We called it 'Pizza-Weed Jam,'" Bower explains. "We really didn't even know how to play our instruments. Originally it was all jam bandy type stuff we were writing and playing...Then we discovered this band Chon."

The rest, as they say, is history in the making.

"As soon as we heard Chon we immediately knew that we needed to make this a real band," Bower tells me, as seriously as anything he will say all day.

Inspired and ignited, they came up with the band name Kusa and wrote up a band constitution stating that they were all all-in on the idea. Then, just to be safe they all signed it—in blood.

"After that we really started getting on to each other and nagging each other about getting together and practicing," Craighead tells me.

With new motivation and tangible goals forming in the back of their minds they set out to push themselves as hard and as far as they could. One of the keys to Kusa, they decided fairly quickly, had to be solid songwriting.

"I think we really just want to challenge ourselves," Bower chuckles from the other end of the line, pausing to mention how cool it is to be doing this interview in his underwear. "Our earlier songs were pretty easy to play but as we have continued writing, and listening to other progressive bands we are really pressing to make each song original. To try not use our music to beat a dead horse."

This goal can be clearly felt through their music, and not just taken as a whole. Each song transitions through multiple phases, keeping everything fresh and taking the listener on an exploratory journey. Are you digging that nasty lead guitar lick? Don't worry, it's about to change. How about that drum rhythm? Get ready for a new tempo. Like that bass? Well it's about to disappear into a cloud of smoke and reemerge sounding like they switched members mid-song.

"To me, the contrast and dynamics of music make it its own language," Craighead interjects while Bower trails off. "It's like speaking to somebody, so if you are the writer you need to know when to repeat things and when to move on. Each song (and even each section of each song) is almost like a different personality of music. We aren't aiming for any kind of genre, we are more concerned with things like how did that make you feel and where did that take you."

If the guys didn't know what they were doing four years ago they have learned to speak this new language fluently in the time since. Bower, who moonlights as the guitarist and low end for local sweethearts Emma's Lounge, along with Craighead and Thomason, have created something with obvious staying power. With songs like "Oil on Water" (released today and available on Bandcamp, Spotify, I-tunes, and Google Play) and a brand new EP on the way, it's only a matter of time before they work themselves fully into the southeastern music fan's consciousness. With touring picking up as well, odds are that even if you don't live in Asheville, they will soon be coming to a city near you.

But if you do live in Asheville, this is a show not to be missed. Coming off of a three-night run, these guys are going to be at peak performance, and they couldn't be any more excited to be making their Ashvegas debut on NYE at the coolest new venue in town.

As Bower puts it so descriptively, "If we could ride a red rocket to Asheville we totally would, that is how excited we are about this show."

And now, for your listening pleasure, Kusa's "Oil on Glass."

Kusa and Galena play at Sly Grog on New Years Eve. Kusa kicks it all off at 9 p.m.