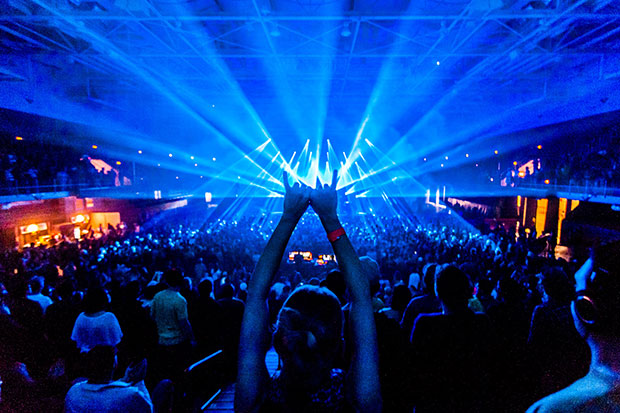 Let me be clear from the beginning that I am not, by any means, a big jam-band fan. It’s not that I don’t have an appreciation for the genre’s musicianship, or for the passion of its hard-core followers. It’s that growing up, my idea of “jams” were the guitar solos in "Freebird" and "Stairway To Heaven" or, perhaps, Creedence Clearwater Revival’s 11-minute version of "I Heard It Through The Grapevine". The closest I came to being in the jam band scene was about 25 years ago when I caught the Grateful Dead at Giants Stadium in New Jersey, and I was more interested in seeing Little Feat open up for them! (Of course, I wouldn’t mind being in Chicago for the highly-anticipated Fare Thee Well shows in July!).
Late last year, when I heard that Umphrey’s McGee was to play their first-ever arena show, and do it here in Asheville, my interest was slightly piqued, but only because I remember catching part of their Thomas Wolfe Auditorium set at MoogFest 2011 and, as a professional concert photographer, I certainly couldn’t complain about the quality of the stage lighting that night. I don’t remember much about the music, but oh, those lights!
Same goes for Widespread Panic’s last stop in town in November 2013. It was my first-ever WS(MF)P gig, and my recollection of it is not so much about the music, but about the light show that went along with it. Yes, I also have distinct memories of some of the fans that I met that night – many of which were all too proud to brag about the Asheville show being the um-teenth time that they had seen the band (while it being my measely first). But, musically-speaking, the only song that I can recall was a cover song – "Slippin’ Into Darkness" (by War). And, oh, did I mention those stage lights?

Fast-forward to December 2014, and it was time for the annual Warren Haynes Christmas Jam, which would have its usual eclectic mix of artists with a guaranteed touch or two of pure, unadulterated jamming out with Warren and his friends (see my AVL Grit Xmas Jam review here). Needless to say, a big production like Xmas Jam at the US Cellular Center deserves an equally-big stage production and, again, as a photographer, I was excited about the prospects from the photo pit. In the end, I wasn’t disappointed, especially when Billy & The Kids took the stage and, let's just say that things got a bit brighter. Though the stage lighting the entire evening was far better than I normally experience particularly at smaller venues, it was taken up a few more notches when Bill Kreutzmann and his band filled their slot, and the place lit up -- quite literally. I would learn later through my music photog buds that the Lighting Director / Designer (LD) for that particular performance was a guy named Jefferson Waful.
Why am I telling you this? Because my pit peers also informed me that Mr. Waful is the LD for Umphrey’s McGee, and he would be back in town in early February to work the board for UM’s inaugural arena performance at the USCC. That’s all I needed to know. The February 7th Umphrey’s McGee date suddenly rose to the top of my priorities of “gigs to shoot” in 2015, if not forever.
Though I was only vaguely familiar with their music, I showed up at the Civic Center as excited as many of the die-hard UM fans. I knew that we were in for a visual treat to complement whatever the band put forth through their amplifiers. Truth be told, musically I was more so looking forward to seeing the opener, a rapidly emerging instrumental jam band out of Brooklyn named TAUK, who I have seen and photographed a few times before, and certainly will again. For the UM show, to my pleasant surprise, the media photographers were allowed to photograph the entire first set. We’re usually given the standard “three songs and out” routine, so having an entire 90 minutes or so to document a performance was a real treat – especially given that one of the best -- if not the best -- LDs in the business was to be our guiding light.

The first set came and went, and I had more than my fair share of up-close-and-personal shots from the photo pit. Mission (almost) accomplished. It was time for a seven-dollar pale ale (plus two bucks for a wrist and), and to catch the rest of the show from the back of the arena with my buddy Steve, where the sound was fuller, and the light show was, well, nothing short of spectacular. To say that I had some fun “going wide” with my Nikon for another hour-and-a-half from the back of the USCC would be an understatement. Jefferson Waful is, indeed, a master. Folks like him make my job easy (or, should I say, less difficult).
Though the Umphrey’s McGee band members where all competent artists in their own right, like the WSP jam session a few months before, I ended the night recollecting a cover song, this time it was Pink Floyd’s "Comfortably Numb" (which happily brought me back to 2010 when I photographed Roger Waters and The Wall Tour in Philadelphia). Though satisfied with the show, it would still be a stretch to say that I’m now a big fan of jam bands. But, they can sure be fun to cover as a professional photographer, especially when there’s a world-class artist choreographing the stage lighting, which undoubtedly brings out the best in the over all impact of the performance.
Will you see me in the photo pit the next Umphrey's McGee jams it out in Asheville? Probably, and most definitely if Jefferson Waful is part of the act. In the mean time, I'll probably kill some time by goin' Phishin' to see if this jam band stuff catches on for me.
For an expanded Umphrey's McGee photo gallery, check out the Front Row Focus e-magazine:  www.FrontRowFocus.com