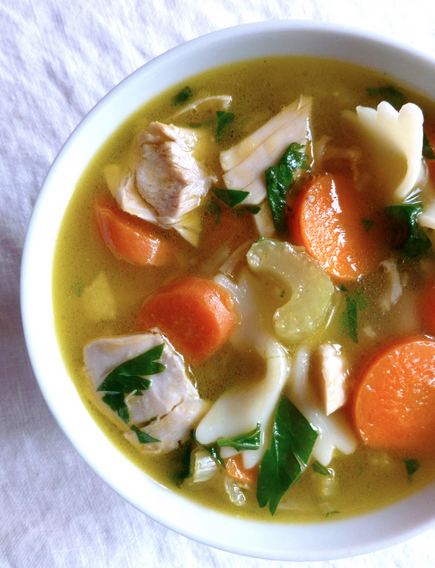 Few dishes rejuvenate like chicken soup. I attribute this to a good broth. As with any dish, especially those with few ingredients, the final product is only as good as each of its components. According to folk lure, a well made bone broth should "bring one back from the dead." I have seen this principal in action, mostly this time of year when school is back in session and the social petri dish is thriving.
Broth is healing for many reasons, but mainly due to its structure. Proteins are already broken down into easily absorbed amino acids, giving the body a break from this process of digestion. Gelatin from bones is also released into the simmer liquid, an excellent anti-inflammatory and gut healing property. Not only is gelatin good for the skin and joints, it soothes digestion and has been proven to help digest the proteins in wheat, oats, barley and dairy. By promoting gastric juices, gelatin is an overall digestive aid, perhaps why we crave it when we are sick. As the body is compromised fighting colds or other infections, gelatin has a lot to offer. Important trace minerals are part of a good broth as well.
The difference between homemade versions and store bought (other than the obvious) is in the bones. Manufactures of boxed versions rely on hydrolyzed fats and proteins to create flavor instead of extracting it from real bones, slowly simmered.
If you were wondering about the technical differences between broth and stock: broth is a substance made from simmered bones, vegetables, water and meat, whereas stock is slightly more crude, utilizing only water, possibly vegetables and bones minus the meat. A broth or a stock however, must always contain bones.
As modern mealtime has been shaped to satisfy busy lifestyles, bones have nearly been swept from the dinner table. The majority of meat cuts sold today are boneless and skinless for convenience sake. This is a shame, since bones are so versitile. Without bones, we forfeit a lot, flavor and healthwise.
By seeking bone-in cuts, you not only waste less, but gain more for your money. After you have enjoyed the meat, the bones can then simmer in the stock pot to create the base for your next meal. If broth making seems daunting, just try it. The stove nearly does all the work. Here are the steps for an excellent chicken broth. Once you are familiar with the process, experiment with fish bones and heads, and bones from larger animals like lamb and beef. You can brown bones from larger animals in the oven prior to broth making for increased flavor and color.
After you make your broth and chill it, and it cools to a aspic or jello consistency, this means you've gotten the gold. If your cilled broth wobbles, jiggles bounces or shakes, your in good shape.
I prefer making broth with chicken or duck feet, which are very high in gelatin. But you can also get plenty of gelatin from just bones.
Lately I have been slow cooking whole chickens or a couple pounds of chicken legs in a dry crock pot with a chopped onion, garlic, a lemon, sea salt and black pepper. The meat tenderizes beautifully over the course of a full day, and the liquid produced during the process is chock full of gelatin. I strain and chill it, then skim away most of the fat. The result is a concentrated, jiggly bounty (pictured). It freezes well and serves as an excellent base for soups and sauces.
With cold season upon us, this stuff will keep you from running to the drugstore the next time you're laid-up on the couch. Make it now, throw it in the freezer, then warm it up and sip when you need a boost. 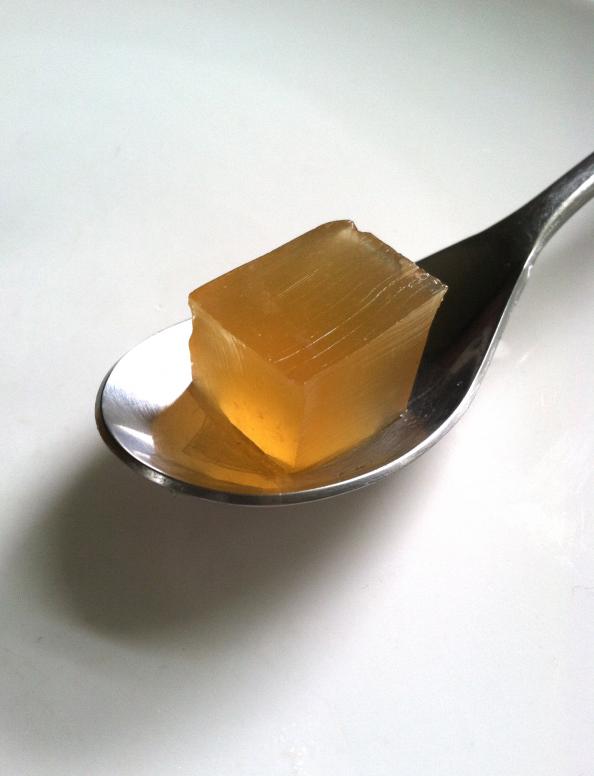 Broth can then be stored in freezer safe containers our used immediately for soups, sauces and cooking liquid.