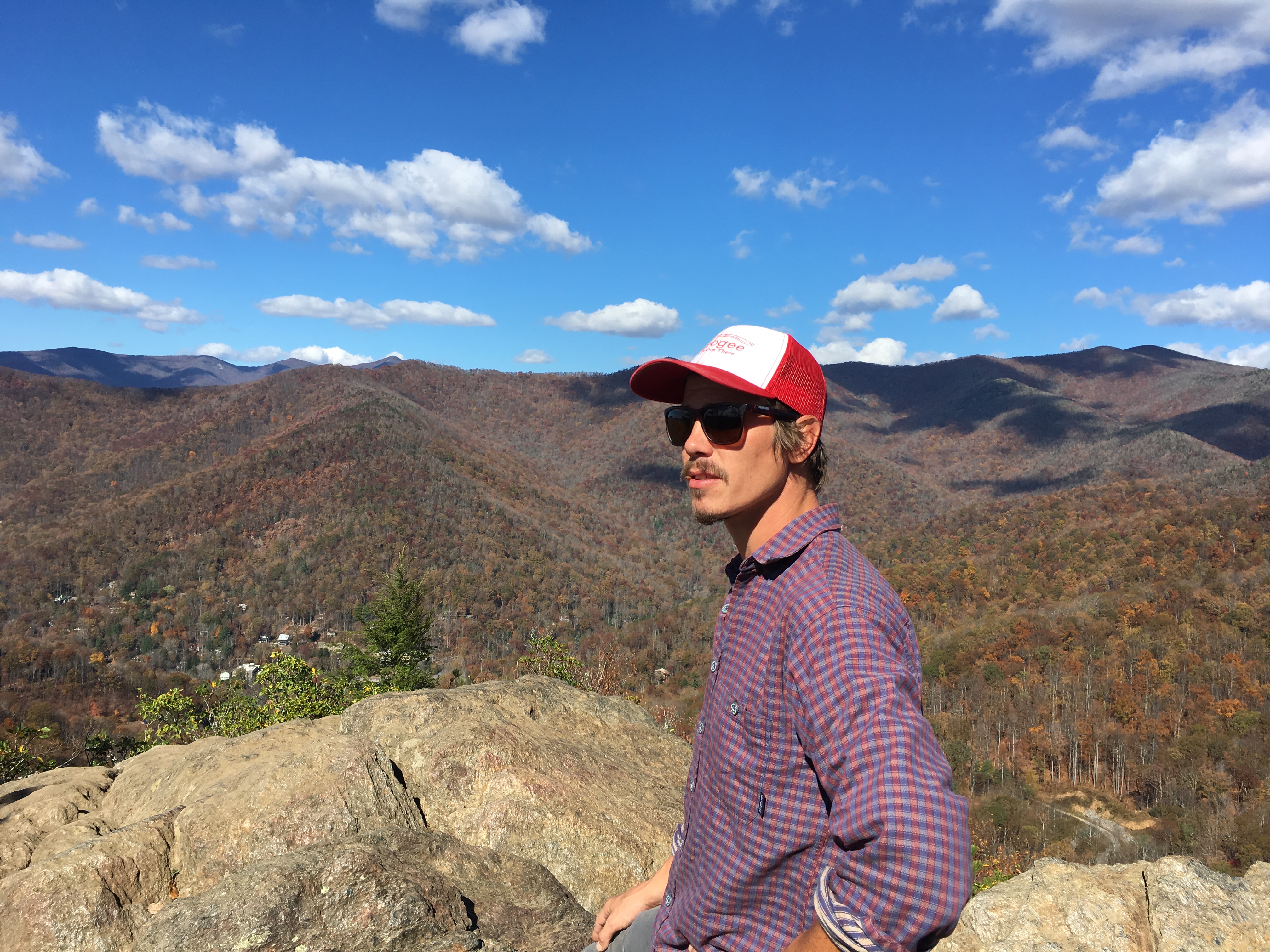 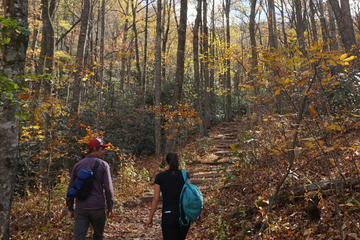 WE TOOK DREW UP TO LOOKOUT MOUNTAIN IN MONTREAT TO SEE THE FALL COLORS FROM THAT VANTAGE POINT.

According to bat biologist Drew Powell, Apogee Environmental is usually contracted out through coal and natural gas companies to assess whether there are endangered species present where a pipeline is proposed. “I’d say the proposed pipelines are where we see the most degradation to forests,” he explains. Apogee looks for the Indiana Bat, specifically the miota species, which are a mouse-eared bat that use trees for roosting in the summertime. 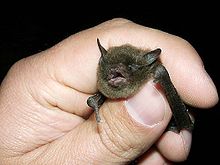 Indiana Bats can roost in anything from any live tree to a dead snag, but they prefer exfoliating bark on a lot of the shag bark hickories and white oaks. If Apogee finds those specific trees on the property, then the company can’t cut those trees. “But there’s always loopholes with big companies, I mean money speaks a lot louder than we ever can, which is unfortunate,” he says.

Drew explains that the Indiana Bat is the only federally endangered bat that they look for, but they tag and keep track of all the bats that they catch.

DREW IS PASSIONATE ABOUT THE WORK HE DOES. HE TOLD US SOME OF THE REASONS HE LOVES WORKING WITH BATS:

They’re just incredible animals. They’re the only mammal fully capable of flight. They’re the slowest reproducing mammal in the world, and they can eat up to their own body weight in insects in one night foraging. A lot of people don’t get to see them up close or get to hold a bat in their hand unless it’s in their house, and then they’re terrified. A lot of people are afraid of bats. I think that a big movement right now is showing people that you don’t need to be afraid of bats; they’re very important to our eco-system. They’re the number one insect eater, they’re somewhat pollinators, and they help with seed dispersal as well.

Drew mainly works in West Virginia in the summertime, but he has also worked in Pennsylvania, Ohio, Georgia, Kentucky, and North Carolina. In West Virginia he works on the consultant side of things. “What I did in NC was actual research for the U.S. Fish and Wildlife and NC Department of Transportation,” he explains.

Last year Drew was looking for the Northern Long-eared bat. “I’m pretty sure it will be federally endangered by the end of this year/beginning of next year,” he says. The U.S. Fish and Wildlife and Department of Transportation were trying to see if there was an isolated population of that species of bat staying out on the coast of NC -- away from White-nose syndrome, which is a fungus that affects hibernating bats and has killed more than 5.7 million bats in the US since it was first documented in NY in 2006. Researchers found that a large population of Northern Long-eared bats stay in the swamps -- primarily in bald cypress trees.

DREW’S RESEARCH WAS IN THE GREAT DISMAL SWAMP AND IN SEVERAL PROJECT AREAS AROUND THERE.

White-nose syndrome is changing bat behavior all over the US. It’s changing where bats are going, where they are roosting, and what kinds of trees they are choosing to roost in. This is what led Drew to study bats in the coastal wetlands.

According to Drew, one of the toughest aspects of his job is the cooperation with big companies that have hired Apogee to survey the area. “No matter what we do, we can work as hard as we want, but ultimately the companies can do whatever they want because they have the power and money to do that,” Drew explains.

However, the folks at Apogee find ways to work around big corporations, too. Drew told us that one time they lost several survey sites because the company that contracted them cut down all the trees on the top of the ridge where they were working, so they had to scramble to find new sites on the active mine. They had one day to find these sites. In four hours they found five new sites. “We went above and beyond, and that night, we caught a federally endangered bat on their property very close to where they mine. They were trying to stop us but they couldn’t. It was pretty gratifying,” Drew explains.

Drew verified that the quality of life for bats is higher in protected areas because there is less human disturbance. According to him, human disturbance is the number one cause for bats leaving caves and contributes to the deterioration of their population.

DREW SAYS THAT THE MOST IMPORTANT THING YOU CAN DO TO HELP SAVE BATS IN YOUR REGION IS TO RAISE AWARENESS AROUND THE IMPORTANCE OF BATS AND TO LOVE YOUR BATS.

“There is a misconception that bats are scary, and they’re going to fly at your hair, and that’s not true...most of the time.”

FOREST FRIDAYS HAVE BEEN TEMPORARILY POSTPONED DUE TO THE FOREST FIRES IN OUR AREA, BUT WILL RESUME IN THE NEW YEAR! STAY TUNED!

For more resources check out these websites:
The Nature Conservancy
Bat Conservation International