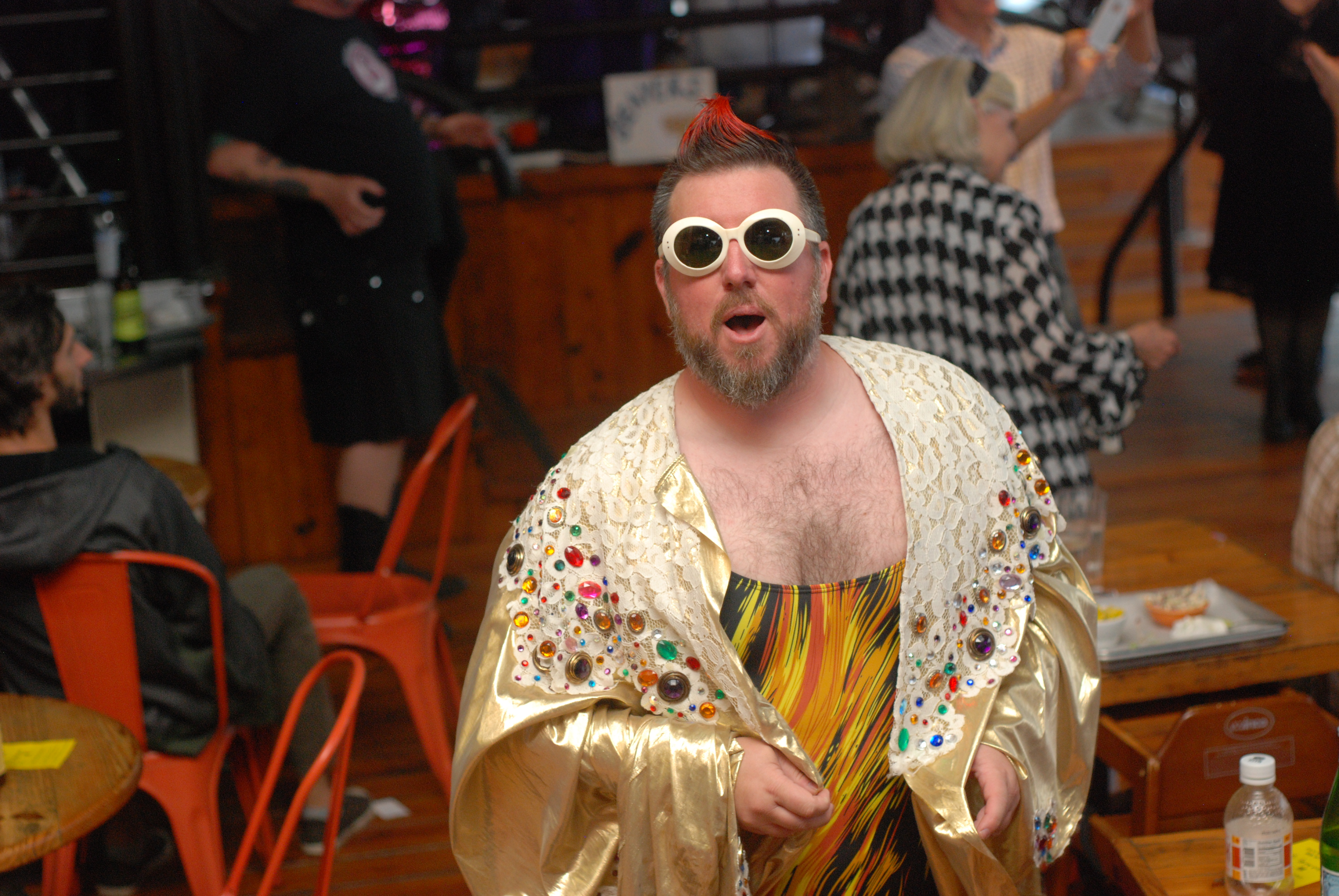 If I had to choose one word to describe Erik Lars Myers, that word would be “dynamic,” and that word would be an understatement. It’s one thing to have the multitasking skills required of a business owner and head brewer, but add to that his role as President of the North Carolina Brewers’ Guild, as well as being an author with a book that is just hitting the shelves (North Carolina Craft Beer and Breweries, John F. Blair Publishing), spearheading a fundraising campaign that has garnered national media coverage, and competing for the title of Beaver Queen under the pseudonym Twiggy Sawdust. Yes, I said Beaver Queen. No, it isn’t what you think. We’ll get to that later.

Erik founded Mystery Brewing Company in 2012. His background in theater had led him to a love of classic literature. It was only natural that the beers would be named after characters, settings, and themes of these great works. It was also important to him not to have a flagship beer. While just about every brewery will offer seasonal brews that come around once a year, Mystery only offers seasonal beers. Every Spring, Summer, Autumn, and Winter, the brewery offers a different core of four beers. There’s always a session beer, a saison, a hoppy beer, and a dark beer. Mystery also offers a Literary Greats Series of barrel-aged and sour beers, as well as a Novellas series of unique beers that are only brewed once a year or once in a lifetime. “My favorite beer is the one in front of me. My taste in beer is mutable. There’s no one thing that I always retreat back to. My favorite thing about beer is its breadth. I feel like to say that I had one favorite beer would not be true to how I feel about beer.”

The first edition of North Carolina Craft Beer and Breweries hit the shelves in 2012, just as Mystery Brewing Company was opening its doors. Myers traveled the state to photograph every brewery, interview the owners, and ultimately compile an anthology of the forty-four breweries that existed at the time as well as the history of craft beer in our state. The second edition of Myers’ book was just released on May 3. He and his wife Sarah Ficke worked together on this project that now contains one hundred and thirty-five breweries just four years later! That’s a little over 300% growth in a very short time, and since the publication deadline of December 3, 2015 North Carolina has continued the trend with more than thirty new breweries opening.

“We don’t spend a lot of time talking about beer in the book. We spend a lot of time talking about people and breweries. Breweries are really an extension of who these brewery owners are and what they want to achieve. To learn about a person and their goals is to learn about the beer that they make. I don’t need to tell you about the beer because I’ve just told you about the person. What we ultimately want is for the reader to get excited about visiting these breweries and trying the beer for themselves.”

For Erik Lars Myers, representing North Carolina Craft Beer doesn’t stop when the book is finished. His role as President of the North Carolina Brewers Guild requires him to constantly speak on behalf of the industry.  Whether he is ironing out details of confusing legal language with representatives of the ALE and ABC so that breweries know how to comply with the expectations placed upon them by the powers that be, speaking to a group of legislators about what they can do to support our state’s growing beer community, or hosting brewers’ conferences to bolster support, education, and professionalism in our field, Erik is constantly seeking to elevate the brewing industry for North Carolina. “One of my greatest strengths as a person is that I am comfortable in front of crowds. My theater background has really helped in that aspect of this job. I feel like because of this, I can be a good public steward of craft beer in this state, and I am genuinely proud of what this state produces.

"We are in a very unique mix of cultures in North Carolina of people moving in from all over the country that means that we have the ability for craft beer to thrive. And it has in a really beautiful way that I want to see continue to blossom and grow. I am proud to be able to represent what the brewers in this state have been able to accomplish. “

Giving back and supporting the community doesn’t stop for Myers with his brewing community. He also finds other ways to give back to his immediate community, especially when there is water involved. As brewers, water is paramount. So when the Ellerbe Creek Watershed Association (ECWA) started the Beaver Queen Pageant as a fundraising event, Myers was immediately on board. The pageant, which is based on bribery of judges in the form of donations to the ECWA to vote for your favorite Beaver personality, plays on Durham’s shady past of corruption and bribing officials to get your way. Ellerbe Creek is home to a community of real life beavers whose habitat has been threatened by pollution and development. Myers has judged this contest the past two years, but this year he thought he would take his support of the ECWA a little bit further.

Twiggy Sawdust, Myers’ beaver alter ego, sports a gold unitard, beaver nose and teeth, and of course, a lightning bolt over the left eye. The Beaver Queen was crowned Beaver Queen at the pageant on June 4th. While Myers didn’t win, he is thrilled to have been a part of this year’s pageant. “If this is the largest fundraiser they’ve ever had, that would make me really, really happy. The community that has sprung up around the ECWA is really fun and LGBT-friendly.  I’m also in this unique position where I’m a fairly public figure, and I’m completely shameless and I don’t mind wearing a gold leotard and singing songs in front of a crowd in the name of environment and inclusivity. I feel like I have an opportunity to be a really good community leader in a nontraditional way.”

And speaking of non-traditional, Myers and Mystery Brewing along with Keil Jansen of Ponysaurus Brewing in Durham have spearheaded a campaign to raise money for Equality NC and QORDS. Upon the announcement of House Bill 2 passing and being signed into law, these two brewery owners sat down over pints to share in their angst against the North Carolina General Assembly and this piece of legislation. They wanted to do something that would voice their support of the community that was disenfranchised by the bill as well as make a public statement in opposition of the legislature that penned it. “Don’t be Mean to People: A Golden Rule Saison” was born out of this discussion.

The two created a fundraising site and reached out to suppliers and brewers in North Carolina to donate ingredients, man power to brew and package the beer, swag, and whatever else they could toward the effort. The response was phenomenal.  Over forty breweries came on board to show their support, and the fundraising website took in nearly forty thousand dollars in less than two weeks, well over the initial goal of $1,500.

One hundred percent of the profits are being split between Equality NC, who is fighting this bill in court, and QORDS, a group that provides summer camps for LGBT youth. “We have an incredible industry that is very supportive. We can do wonderful things in this state by working together in the name of equality.” This campaign has garnered national media attention from NPR, The Washington Post, USA Today, The Chicago Tribune, Huffington Post, and others. Donations have also been coming in from all over the country as well as from right here in North Carolina in support of kindness and generosity over divisiveness and exclusion.

If reading this article makes you want to shake Erik’s hand (and let’s face it, you do) you can find him and Sarah at Malaprop's Bookstore in Asheville at 7pm Wednesday, July 6th. Look for other dates across the state as well!