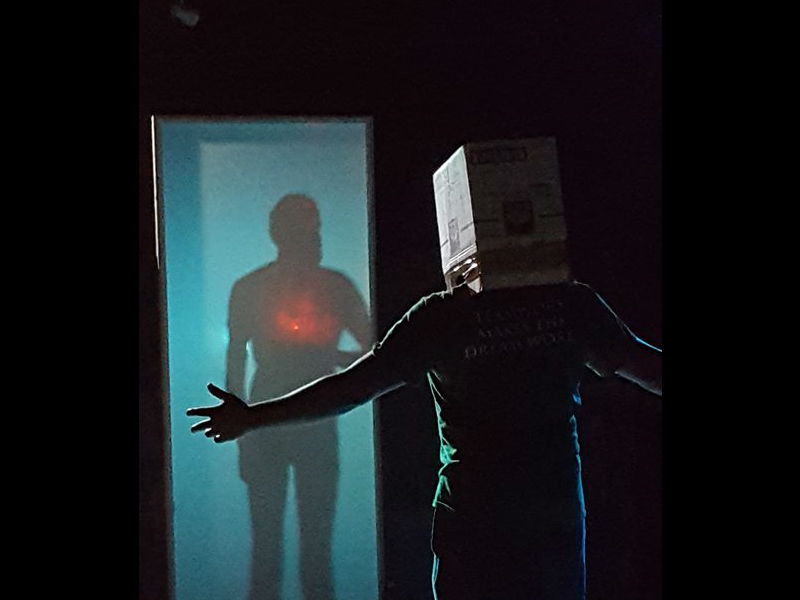 We saw the Friday 8pm show. Dr. E and I polished off a bottle of Vouvray and bag of organic popcorn at her house prior to the show, so we were feeling loose and relaxed. I’m not one to give away key story or plot details and generally avoid reading reviews before seeing a movie or play generally because I might catch wind of too much information.  I usually have an idea of the overall critical consensus and I prefer to go into the theater with a vague notion of the genre and some working knowledge of the folks involved. The less I know the better other than, does this sound like my cup of tea. In this case, I knew:

1.     Title: The God of Hell – Sounds Intriguing, bold and provocative

2.     Anam Cara Theater Company – I’ve never seen one of their shows but know members of the company and that they take on more edgy and experimental material

3.     Toy Boat – It’s that place over on Fairview Rd. just off from Biltmore Village with the Full Moon Gatherings, Vaudeville Shows and a whole lot more

4.     Sam Shepard wrote this play – I’m familiar mostly with his film acting but very aware of his large role in the history and evolution of American theater and that he has written a lot of things, mostly plays, over the past several decades

With all this in mind, I decided – “Count me in.” I told the editor of Asheville Grit that this play should get a write up so we can get the right people aware of the show in time to catch one of the remaining three performances (happening Saturday, 11/5, Thursday, 11/10, and Friday, 11/11 at 8 pm). For this review I decided take a friend. We planned to talk about our experiences and thoughts on the play after the fact, a la Siskel & Ebert for those that might recall the long running TV show and the format. I wanted to have a second opinion and another person’s perspective. After the play, we went to Buffalo Nickel in West Asheville and I recorded our 30+ minute conversation on my phone while we enjoyed waters and shared a cheeseburger, fries, cheese grits, and chocolate cake.

We definitely agreed that the play is timely and full of symbolism that applies to our current national political election cycle and brings many themes to reflect on. For a modestly-budgeted production, it’s got some bells and whistles peppered in that bring attention to themselves, and that contrast and highlight the play's combination of the surreal and the mundane, a theme woven throughout. The show features deliberate pacing and tone, stellar moments and a sly wit. Performances were subdued, yet appropriate. I particularly felt electrified during the scenes with the Welch character (played by Rachel McCrain). In general, I would say this play is a good fit for curious people interested in but not necessarily keyed into the Asheville Fringe performing arts scene. Dr. E and I definitely talked a lot about what might have been on the page versus what was a directorial choice. We also both wondered when the play was written.

It turns out the play was Sam Shepard’s response during the wake of 9/11, and with that I may have already said too much.