Gabe Pickard: Factotum and Ebullient Conspirator in the Leavening Arts

Gabe Pickard: Factotum and Ebullient Conspirator in the Leavening Arts 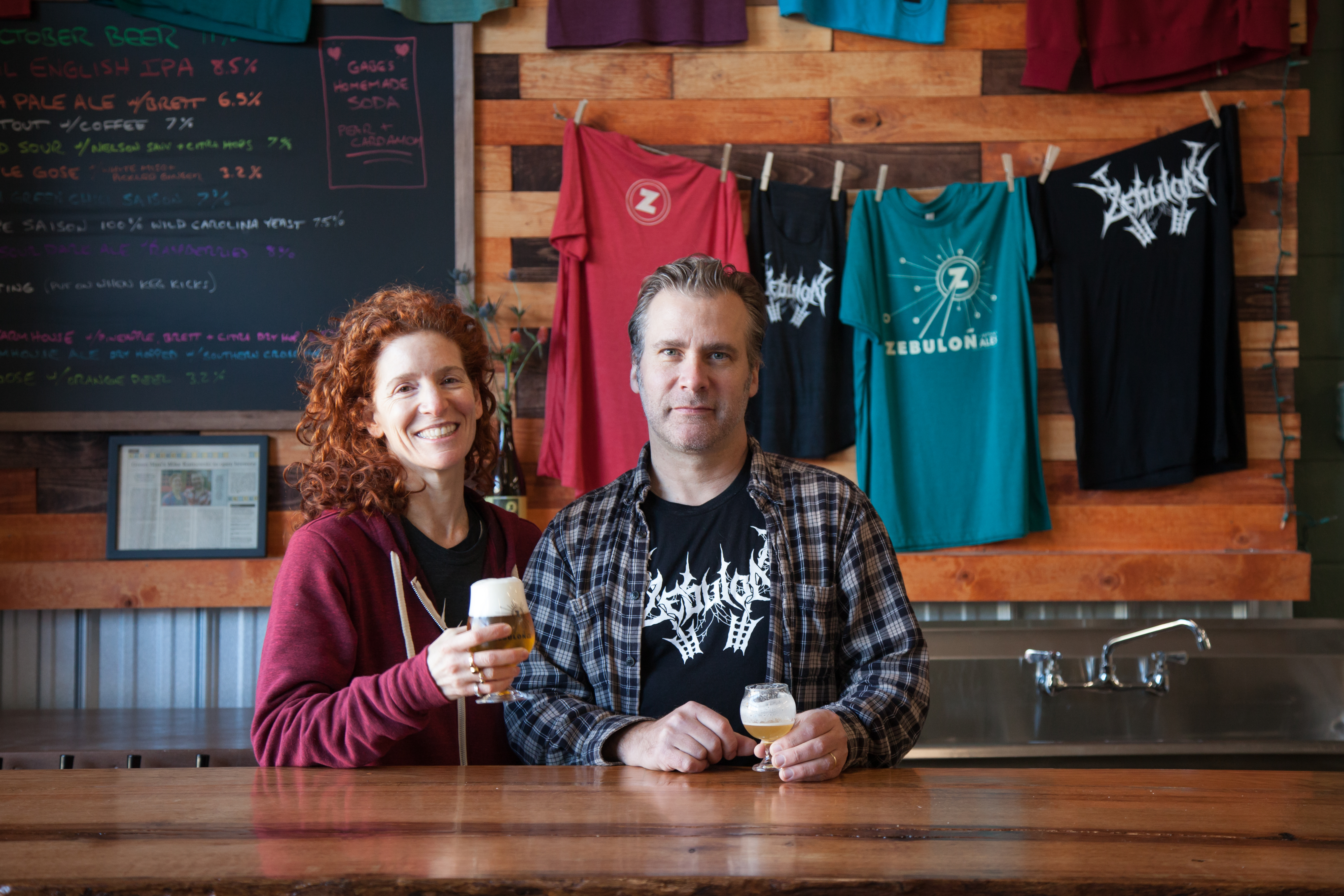 I am constantly awed by the diversity of talents that people in the brewing industry bring with them. Gabe Pickard of Zebulon Brewing is the perfect example of this. She is a classically trained dancer, a yoga instructor, a physical therapist assistant, and she happens to co-own a brewery with her husband, Mike Karnowski. To some, this may seem like an awful lot for one person to manage. Gabe turns that logic on its head. In each of her endeavors, she points out, she works with living organisms, whether it's yeast cells or human bodies, to tow the line between art and science. 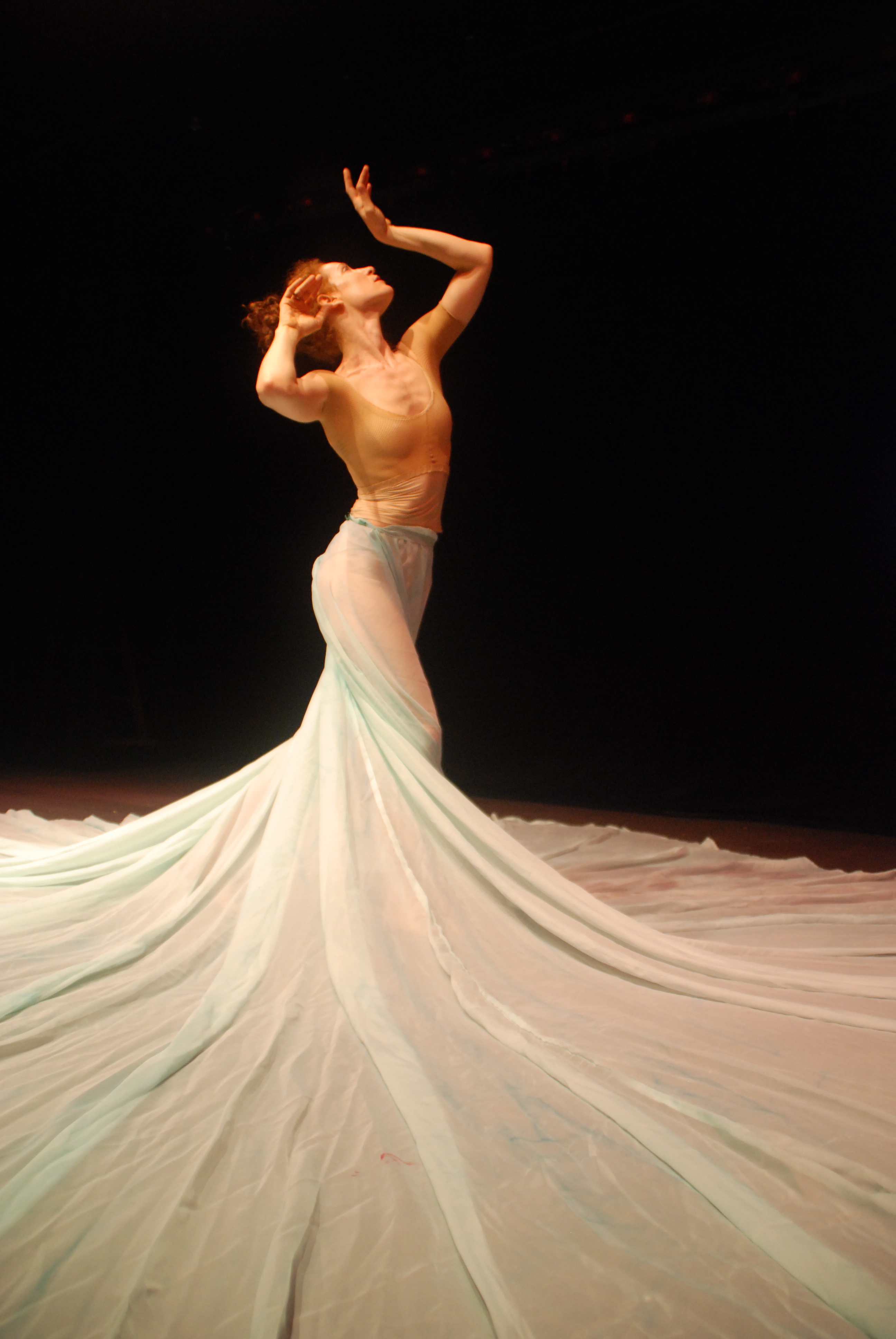 “Like yoga, when I brew beer I feel like I can drop into a kind of meditative state.” Gabe says. She goes on to point out more intersections of her diverse body of work. “I would love to teach a yoga for brewers class.” She points out how strenuous small batch brewing without the help of automation can be on a person’s body over time. “There are simple exercises that they can do to prevent repetitive use injuries and allow them to work longer in the industry.” Gabe also sees a similarity in the way that people respond to both yoga and brewing. “You can stay on the surface and satisfy a hobby or a workout routine. Or you can go deeper, and take on the philosophy of yoga or a career in brewing. Either are viable options, and there is a spectrum in between.” It’s as if she is weaving a fabric of fluidity, strength, and integrity around her as she speaks.

She and Mike met about 27 years ago. At the time, they were both working in a bagel shop in New York City. What started as a beer after work led to them discovering that they were both born in the same obscure town in Northern England. It wasn’t long before they were homebrewing together, also. “I don't remember the type of beer we brewed in that particular kitchen, however, I remember we had to drink two cases of Grolsch beer (the beers with the flip tops) because we did not have a capper at the time. Needless to say I do not like Grolsh beer anymore (or any less!).”

Soon after, the couple relocated from Jersey City, NJ to New Orleans, LA. There they opened a homebrew shop called Brew Ha Ha, where she learned how to brew by teaching others the craft of brewing. Whilst running a new business, Gabe earned a BA in Philosophy. She also produced, directed, choreographed, danced in, and wrote grants for an annual music and dance concert ten years in a row. Once they made the move to Asheville in 2007, Gabe continued to push herself. She found work as a yoga instructor and returned to school to earn a degree as a physical therapist assistant. She also helped out at Green Man, packaging the specialty beers that made Mike Karnowski a household name to WNC beer enthusiasts. 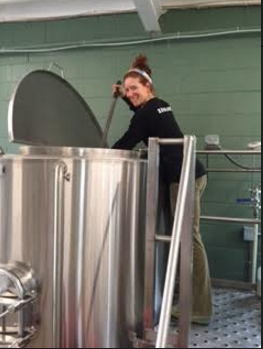 “Embarking in a new business is daunting, but with dedication, passion, and a lot of focused hard work it can be a rewarding and invigorating task. The tendency of the stresses of a business seeping into the delicate fabric of a relationship can be tricky to navigate, though it is possible and totally can be done.” While Gabe admits that she isn’t an expert, she does offer these words of wisdom, “Everyone is different and has different life and work styles. Each party in the relationship must find their place and space to work that suits them best. A partnership in life (in my opinion) includes people who mutually respect each other, who can communicate, and who are, at the heart of it all, friends. I am sure I can go on and on describing the valuable attributes that make up what a well-oiled relationship looks like, but I think I would continue to erase and start again continuously.

I guess I think of long lasting relationships kind of like a mandala where the sand is designed and placed perfectly only to be swept aside and started over again on. A continuous work in progress where each party allows the other growth, transformation, and at the same time offers continuity through time. Chemistry is also at the heart of friendly, fun and loving relationships. Chemistry offers that spice to be sprinkled in throughout. My mom used to say that it is unsustainable to be in that first in-love phase of a relationship perpetually; in that phase it is hard just to eat or sleep much less to work on projects and creative endeavors.

“There are a lot of stressful days,” she says, “but the positives outweigh them.  We feel its important to care about the beer we are making.  We are passionate about it, and focused on quality control and integrity.”

While Mike is at the helm of all of the brewing for Zebulon, Gabe is busy handling pretty much everything else at the brewery. “My business card reads 'Gabe Pickard-Karnowski: Factotum, and Ebullient Conspirator in the Leavening Arts.' In addition I currently work part time as a Physical Therapist Assistant, I am a Certified Iyengar Yoga Instructor and intermittently toy with the idea of producing a couple more experimental dance/music concerts.”  She is also in the midst of creating a line of beers that will be released annually and will benefit a different women lead and/or focused non-profit each year. “I am working on recipe development for the first one now!” she says.  “We see a way that we can make an impact on a local level by working with area non-profits.”

To learn more about Zebulon visit their web site at www.zebulonbrewing.com or visit their tasting room Fridays and Saturdays 1-6pm at 8 Merchants Alley in Weaverville, NC. You can find their beers at any of the Asheville area bottle shops.