The Felice Brothers Trying to Find Themselves

The Felice Brothers Trying to Find Themselves 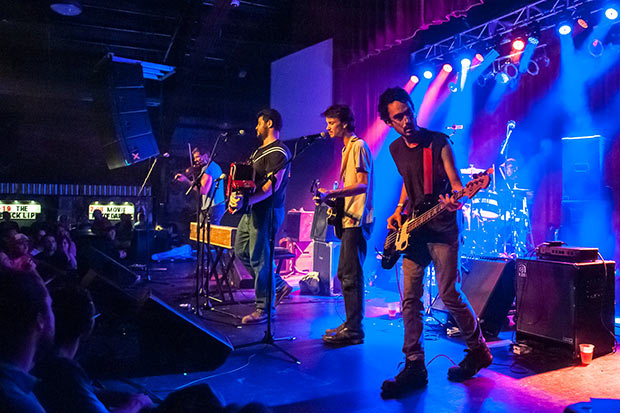 Let's be honest...  If I were the Felice Brothers, or any band for that matter, I wouldn't be too excited about playing a Monday night gig in the middle of the summer festival season, let alone, the Monday after a three-day holiday weekend.  It can be tough enough drawing a big crowd on any Monday, and this proved to be the case on July 7th as the Felice Brothers played to an Orange Peel floor that was, maybe, only a third full.  It certainly wasn't what I've grown to be accustomed to at the OP, with most shows either selling out, or being near-full capacity.  Unfortunately, this gig would be an exception, with a light turn-out.
With this being the third time that I've seen the Felice Brothers over the past three or four years (the first being at a festival in the Northeast, the second being their opening for Josh Ritter last year at the Peel), and not being completely intrigued by their previous performances, I was doing my best to keep an open mind about their July 7th headlining show.  After an opening set by Robert Ellis, the "brothers" took to the stage, opening the show with "Lion", off of their latest CD, Favorite Waitress.  Though the cut was hot off the press, and likely unfamiliar to most in attendance, it wasn't a bad start, despite the small-ish crowd.  But, it certainly didn't hook me, nor excite me much.  Neither did the second song, nor the third.  Mind you, it didn't help that my initial position in front of stage-right provided a disproportionate amount of fiddle volume that overwhelmed everything else on stage, but there was something lacking.  The energy level of the guys was much higher than the past couple of times that I've seen them, but it seemed to be at the expense of a tight, cohesive sound, that never really came together.
At times, it seemed as if the Felice Brothers were searching for an identity.  Were they a rock-and-roll band?  Grunge? Punk? Americana?  Bluegrass?  I realize that in today's music world, just about any artist out there brings in a fusion of music genres, often resulting in an inability to plop them in a specific box, but for me, this seemed particularly difficult with the Felice Brothers, and it had an effect on their live performance.  I felt confused, and a bit disoriented.
But, the band's hard-core fans certainly didn't mind any of this, as many of them stood at attention for the entire evening, singing along with the band as if the party were bigger than it really was.  Apparently, there were still a couple hundred Ashevillians who had some energy left after their Independence Day Weekend celebration, and the Felice Brothers could not have been more appreciative of it.
This certainly wasn't one of the more memorable shows that I've experienced at the Peel, but I sense that it was, indeed, a good one for a few others in the house.  Maybe it was just me who was running on empty after the weekend. Perhaps we'll find out the next time they come to town, hopefully not on a Monday after a holiday.