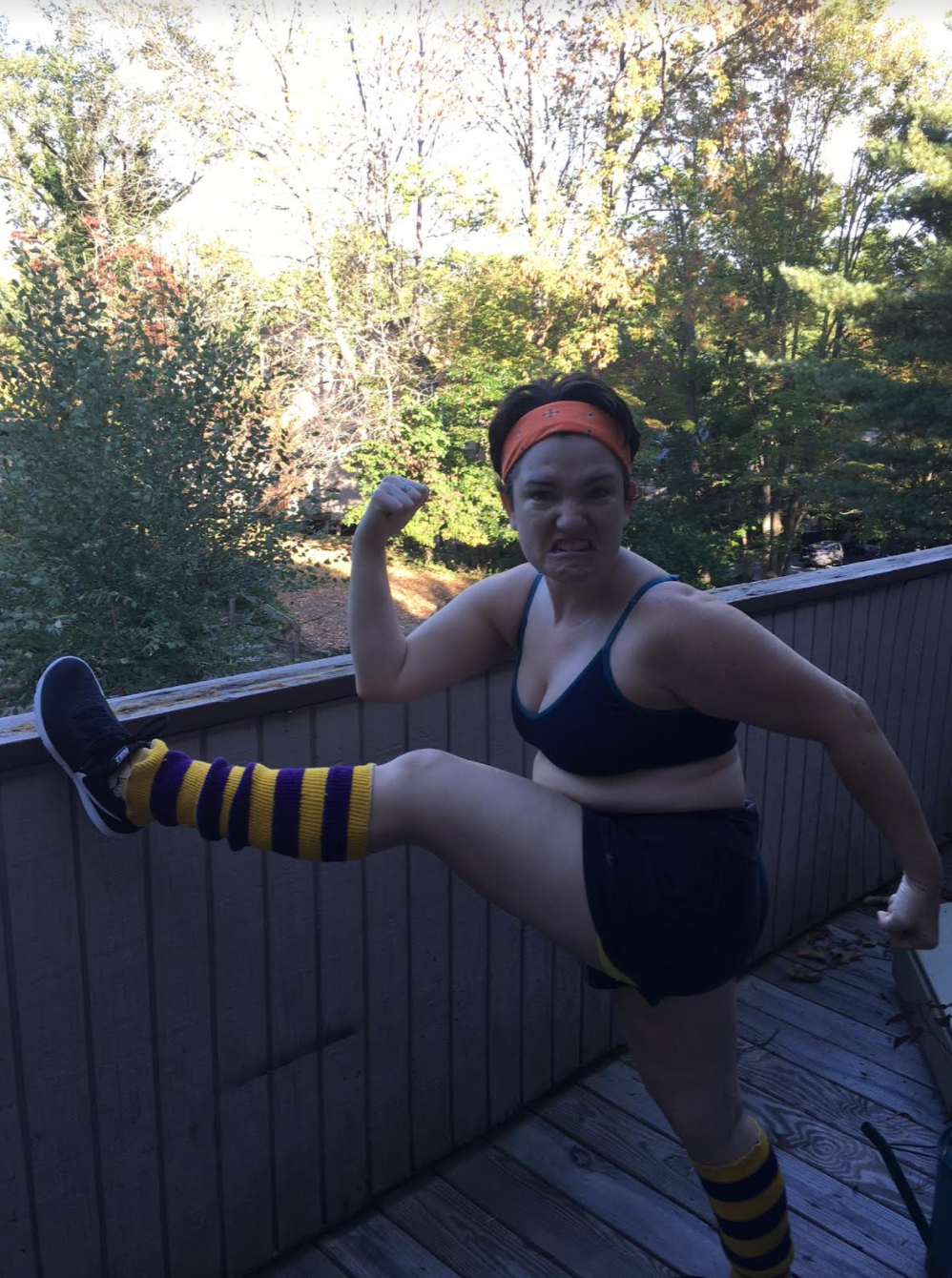 When my friend Jean asked me in July if I wanted to join a five-mile race with her slated for the end of September, I hesitantly told her “Yeah, sure.” I had never run a race, nor do I like anything cardio, especially running. So, why did I tell her yes? I suffer from FOSN (fear of saying no) and FOMO (fear of missing out). But this was July, after all, and September was months away, so maybe I would have a freak accident by then or the world would implode. Chances were that somehow I could get out of running.

Time went by, and the more I thought about being able to run in a race, building up stamina, trying something new, and being the girl at the party who had to leave early because she had a race the next day, the more excited I became and the more eager I got. Maybe I could run. So I made a commitment to myself that, yes, I would run in the Oskar Blues Race to the Taps five miler on September 30th.

When I was asked, even the thought of running a quarter of a mile made me get a knot in my stomach and start to sweat. So I put off training until the last minute. Let me note that I am by no means inactive—I take high-intensity classes at the YMCA like boot camp and insanity, hike, and ride my bike when I can. However, cardio and endurance is not my thang. I took my first cycling class in August at the Y with another friend who encouraged me. I have never gotten close to death, but I think this class brought me closer to what it may feel like. Never mind the workout: The seat riding up my ass was enough to kill me. I was sore for four days—sitting would never be the same. I was determined to keep going, so I used my crafting skill to make a nice little padded seat to attach to the rod of hell that was the seat on the bike, and my butt did not hurt so much. And guess what? I started to like cycling. With the lights turned low and the music loud, I went into my own world during the classes. I enjoyed increasing the resistance and my speed, and challenging myself became exciting. I couldn’t believe that I was starting to experience the “high” people talked about from cardio.

Cycling was great, but I decided I should actually start trying to run before the race. I started just around my neighborhood, really only stopping to walk when I got to a hill; otherwise, I shocked myself that I could actually run for what I thought to be a good distance. I continued running when I could, really only three or four times before the race, and taking cycling classes to gear up. The most I ran for was 25 minutes, about 2.5 miles.

I heard that a discount was given if you registered a team of six, and you know me, I couldn’t turn down a discount. So I manipulated four other friends to join the team. The day of the race came and I was really excited to be a part of a team (The Ice Cream Truck Chasers) and to say that I was going to run a race! The race started at Oskar Blues in Brevard at 11 am. I got my number and my swag and I was ready. Two hundred and five racers congregated behind the start line, our team towards the back. The gun went off and we all began to move in a clump like sheep whose farmer has just opened the gate to a grassy, open field where there are copious amounts of grass to eat. Except we wouldn’t be eating grass—we would be running for five long miles. I started to panic a little at the thought of the five miles that lay ahead. How was I going to run for five miles? I hadn’t even run that often before this race, and here I was trying to run with real runners. I talked myself down and tried to stay in the moment. After mile two, I was feeling the strain, my body was getting tired, and I was starting to alternate between running and walking. But I kept going. I was neck and neck with Maggie, a girl on my team, and she encouraged me by letting me know what mileage we had and by telling me keep pushing. I finally saw the finish line. I finished at 51:30, 116 out of 205 racers. 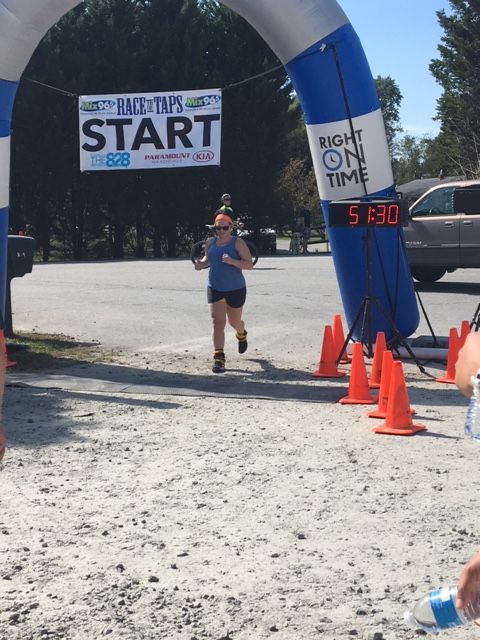 My friend Ashton on our team was shocked that I had made such great time: “I mean, I just didn’t think you would make such good time, that’s great.”

"Really?" I thought. "Because I’m fat?" Fat girls can run. Of course she didn’t mean that, but I like to be dramatic. Ryan, my boyfriend, was also shocked at my successful time and endurance with the small amount of training I had done. It was my and my friend Taylor’s first time running a race and she finished exactly ten minutes after me. I felt like a proud momma. I didn’t think I had done that well. I had walked more than I would have liked, and I was perturbed that at some points when my brain had gotten the best of me by not allowing me to be in the moment. So, even though my fat little thighs endured some major chafing and my body was sore, I did it. I ran a race! 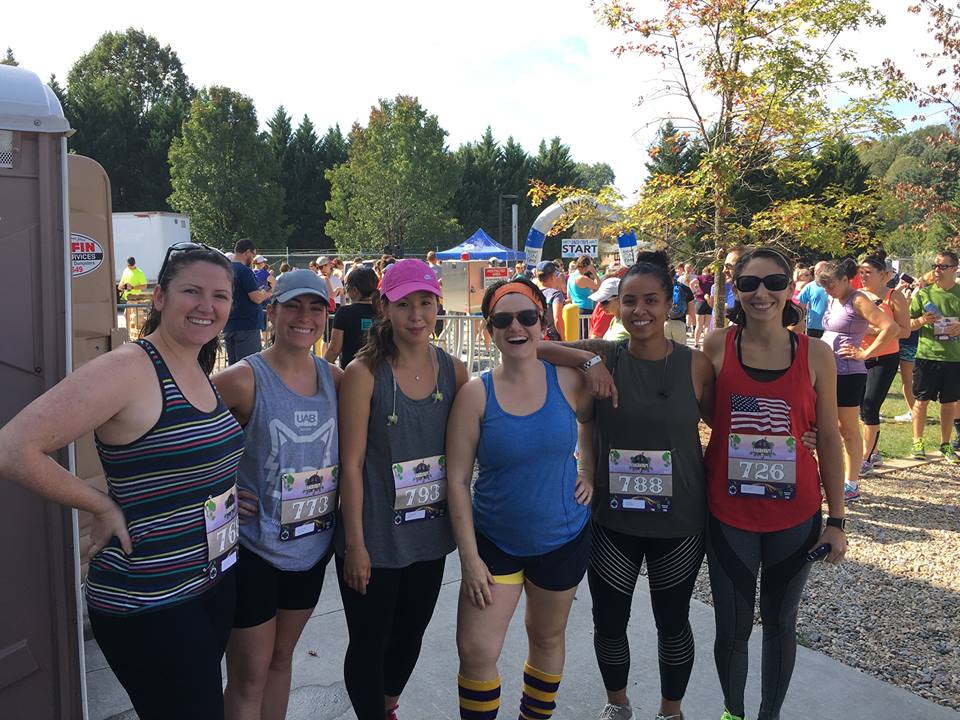 After the race, our group congregated on a patch of grass on the brewery property and talked and laughed, enjoying our free beer. I don’t even like beer, but of course I got one, 'cause it was free! In the midst of an announcement over the speakers, I heard our team name. “Wait, they just said our team name and told us to come to the front,” I said. My team looked at me like I was crazy. I ran—just kidding,I walked—to the front of the stage.  I asked a girl standing there why our name had been called, “Your team won best overall time for a six pack.” I couldn’t believe it.

She began loading my arms up with cups, bottles and tickets to the Eliada Corn Maze. I ran back and told the ladies. They, too, were as shocked as I was. Maggie was also called for best time in her age group. Here’s the thing: In the frustration of registering everyone (the registration online was a nightmare) I had made up fake birthdays for everyone. I put Maggie down for 34 years old when she was really 24. I had finished seconds after Maggie, which left me possibly winning for my age group, 31-34. But then I put down Ashton as 37 when she was really 31, so in all actuality, she won. Basically I was pissed at myself for not being more precise in the entering of our information, as I didn’t really know that it was going to matter.

In the end it was an amazing day, a chance for camaraderie, challenges, and bucket list check-offs. And my body wasn’t even that sore the next day. I never thought I would be so grateful for someone asking me to run.