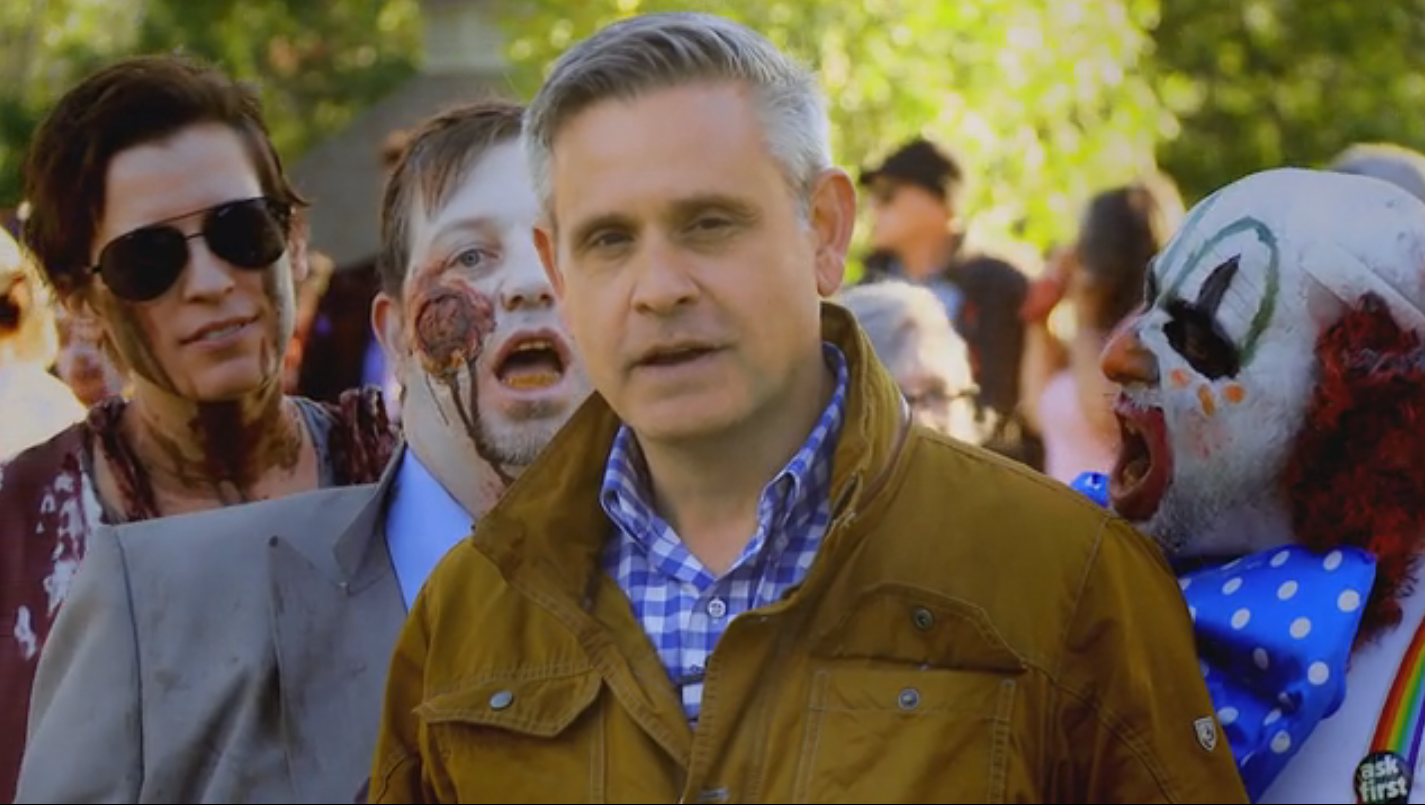 It's a beautiful early fall day in Asheville, and I'm deep into a conversation about zombies with Dead Brew's co-creator and executive producer, David Huff. The Kickstarter campaign for the film, a zombie movie set in Asheville, NC, just launched, complete with hilarious teaser trailer. This horror-comedy entree into the zombie genre has been on Huff's mind ever since he moved back to Asheville last spring.

"I was roaming around downtown late at night last spring, hopping in bars and having a great time," says Huff. " And I was thinking about walking down all the alleyways--Chicken Alley, Carolina Lane--and I thought, 'Asheville is such a movie set.' And what movie hasn't been done here yet? A zombie movie! That's the first thing I immediately thought of. Then I thought, 'What would the story be?' It would have to be truly Asheville."

Though Asheville and the surrounding areas have been tapped as a filming location, setting a horror film in town will create an entirely different experience of the city on screen. The plot is uniquely Asheville: A monster hurricane caused by global warming hits town and causes the local power company's coal ash ponds to breach and seep into the French Broad River. The coal itself is "hot" because it was mined very close to uranium deposits, and when local breweries use the water for their craft brews, the effect is the zombification of their patrons. A local barista, Piper, and her brother, Fitz, are the unlikely heroes after Piper discovers that her special coffee brew is the solution for the zombie apocalypse. They're aided in their quest to save Asheville by a PTSD-afflicted Gulf War veteran, Jerry, and a host of other characters, including a family of tourists from Florida who don't fall prey to the epidemic ("because," says Huff, "they drink Budweiser.").

The zombie genre's meteoric spike in popularity began about 15 years ago with the release of 2002's 28 Days Later, which is also credited with introducing the now-ubiquitous "fast zombie" (although the credit actually goes to 1985's sillier Return of the Living Dead). And the zombie remains a fitting monster for our own era of environmental, societal, and technological catastrophe, which leaves most of us feeling powerless to protect ourselves or the world from impinging doom. (Dead Brew's zombies, by the way, are fast.)

The real monsters in the movie are the people and organizations that turn a blind eye to the problems literally seeping into the community. "The cover-up and collusion of real problems, like climate change, and the idea of corporate greed and the corporate government trying to bullshit the rest of us [is] major," says Huff. The horror genre famously represents cultural anxieties, and Huff and his screenwriter have made a point of bringing local and global fears into focus through the film's themes.

But the movie also has its light-hearted moments, which will be especially enjoyable for people familiar with Asheville but will have universal appeal for genre fans. "It's truly Asheville," says Huff. "We're calling it Asheville, we're filming it here, and it will fit the city--its brewery scene, tourist scene, adventure culture, etc. But it will be a film that's totally fictional and can be viewed by anyone, anywhere."

Other major themes of the film--the relationship between Piper, Fitz, and Jerry, the importance of craft in Piper's professional aspirations, the fulfillment that comes from following your dreams--speak to the larger message of standing together against the forces that try to break the bonds of human connections. 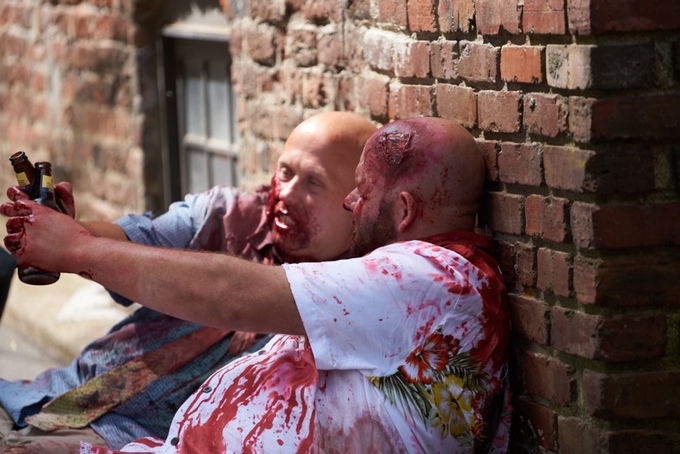 And it's horror, so of course there will be plenty of blood and guts.

"The critical weekend of the zombie apocalypse takes place during the Asheville Zombie Walk, so there will be a scene filmed during the Zombie Walk, when the zombies collide with real people," says Huff, who filmed part of the teaser trailer for the Kickstarter during the 2016 Zombie Walk.

Asheville's reputation for being strange will also come into play. The Budweiser-swilling Florida family "has come to take their kid off the grid," says Huff, "and when they get to Asheville and see regular people in town, they say, 'Well, Asheville's weird.' And then they see the zombies and think, 'Yeah, we get it, Asheville's weird.'"

Huff credits screenwriter Bryan Kish, a horror enthusiast, with bringing his vision to life. Funding the Kickstarter successfully will allow Huff to bring Kish on for the full film. "When I hire him to write the screenplay it will be the story I want," says Huff, "but he's so talented and creative that he'll pay so much attention to the details. He's putting in Easter eggs for people who know the genre, for anyone that knows the Romero films and other classics, as well as not-so-subtle things that everyone will enjoy. Even names of certain places, things like that will be references. He'll be the one to do all of that." 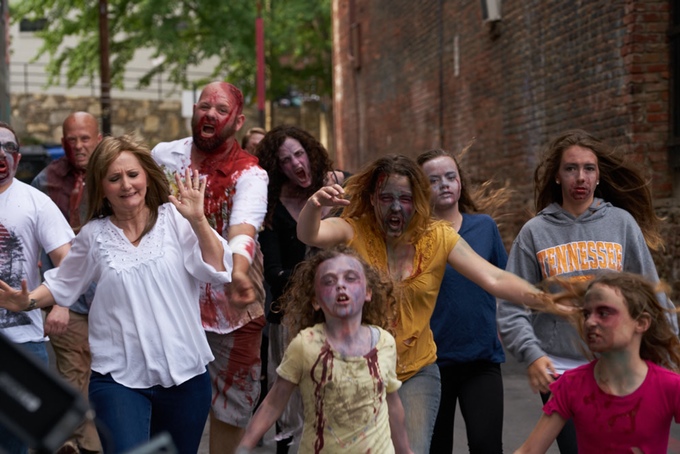 "We want to have a lot of fun," says Huff. "Kendra Penland, from the Asheville Brewers Alliance, has been very supportive. Tim Schaller down at the Wedge let us shoot some scenes for our teaser there. Jon Filmore over at the City of Asheville was great and got us set up with permits to film in Carolina Lane. People came together to donate time and shoot our teaser. The movie will ultimately support and promote Asheville."

It will also poke a little bit of loving fun at our tourism-crazed mountain town. "I love Asheville," says Huff, who also publishes the satirical, Onion-styled Asheville Bulletin, "but I also think it's time to have fun with Asheville, because Asheville does have a tendency to really enjoy reading about itself in magazines, and that's always a little worrisome."

One particularly humorous element is the character of Piper's slacker boyfriend. "It's truly Asheville," Huff laughs. The movie will also incorporate the younger generations' penchant for right- and left-swiping by including a couple on a Tinder date.

The Kickstarter, which runs for 30 days, will raise $25,000, which will cover the cost of writing the full screenplay and hiring a producer for a breakdown and budget. "Once we have the budget I can go to larger film funds, people with deeper pockets, to fund the film," says Huff.

Kickstarter incentives for donating to the project include shout-outs, bottle openers, t-shirts, signed copies of the treatment, behind-the-scenes access, and VIP status for exclusive events.

"When I moved back to Asheville, I remembered that the creative vibe here is just amazing," says Huff. "You can't help but be here and soak it up."

And, like so much spilled beer--or blood--that's exactly what Dead Brew will do.