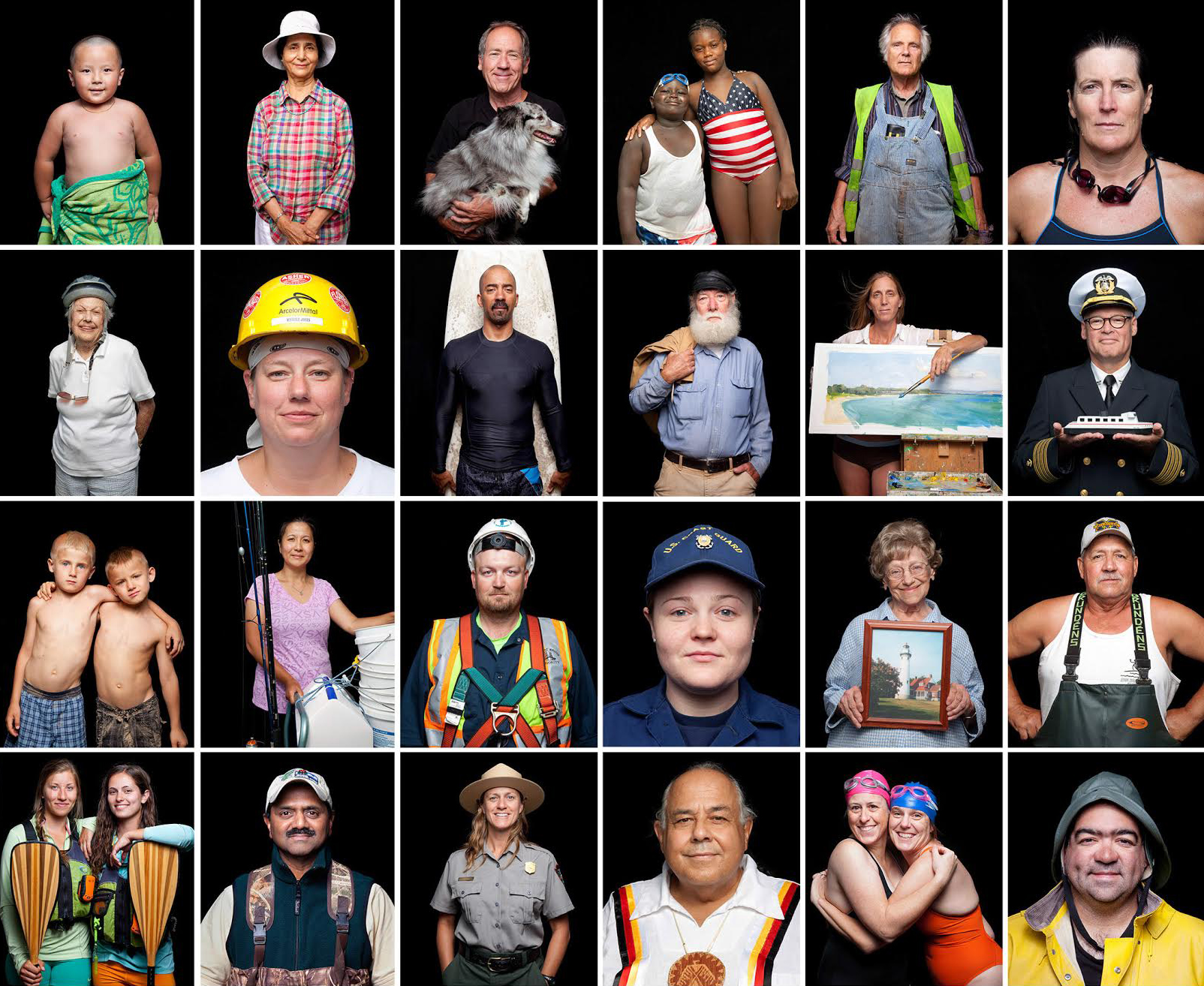 Window (Re/production | Re/presentation) is pleased to welcome Milwaukee, WI artist, Kevin Miyazaki to Asheville from July 8 through July 10, 2015, during which time he will produce a new work exclusively for our space. Taking cues from his recently completed project, Perimeter (commissioned by the Haggerty Museum of Art in Milwaukee), Miyazaki will set up a portable photo booth in the alcove adjacent to the window space on Broadway in downtown Asheville. Over the course of two days (July 8th and 9th), Miyazaki will create a series of portraits of members of the community, which will ultimately be formed into a gridded composite image. The final work will be on view from July 10 through October 30, 2015.  There will be an opening reception and sidewalk art talk with the artist on Friday, July 10th from 5:30 to 6:30 p.m.
The focus of Perimeter was Lake Michigan, as a way of addressing the larger topic of fresh water in the Great Lakes region. The portraits in the exhibition and book drew upon photographic histories of the typology – referencing well-known projects such as August Sander’s ambitious The Face of Our Time from the 1930’s, and more contemporary portrait series investigating tropes of personal representation and identity, as seen in projects like Rineke Dijkstra’s Beach Portraits. For Perimeter, Miyazaki photographed his sitters against a black backdrop, neutralizing the setting, and therefore celebrating the subjects as individuals, and ultimately in a collective group.

Image Credit: Kevin Miyazaki
Aspects of representation are fundamental to every portrait study -

Although the portrait refers to an original self already present, this self needs its portrayal in order to secure its own being. The portrayer has enriched the interiority of the portrayed self by bestowing exterior form of it. For, without outer form the uniqueness of the subject’s essence could be doubted. The portrayer proofs his/her own uniqueness by providing his proof.1 In Asheville, Miyazaki will apply the process initiated during the Perimeter project to his encounters with residents and visitors to Asheville – creating a unique image of a community. Purposefully positioning the sitters juxtaposed amongst one another in the structured grid of the final image will emphasize this sense of community, asking the viewer to more carefully consider relationships to one another, and to ourselves.

The point of such an arrangement is above all comparative: the viewer is thereby invited to intuit from the nine, twelve, fifteen, sixteen or more individual instances the latent ‘presence’ or operation of a single type and at the same time to enjoy a heightened apprehension of the individuality or uniqueness of the particular instances relative both to one another and to the latent or implied type.2 1Ernst Van Alphen in “The Portrait’s Dispersal: Concepts of Representation and Subjectivity in Contemporary” Portraiture: Facing the Subject, ed. Joanna Woodwall. 1997 Manchester University Press, p. 239
2Michael Fried in Why Photography Matters as Art as Never Before. 2008 New Haven: Yale University Press. 2008. p. 309

ABOUT THE ARTIST
Kevin Miyazaki is an editorial and fine art photographer based in Milwaukee, Wisconsin. With a focus on issues including family history, memory, and the intersection of public and private space, Miyazaki works with a wide range of subjects—from people to rundown fast food joints to found objects and everything in between. His work has been exhibited at a variety of institutions, including the Photographic Center Northwest, The Madison Museum of Contemporary Art and The Rayko Photo Center. Perimeter, a solo exhibition commissioned by the Haggerty Museum of Art in 2013, has recently been published in book form by the Wisconsin Historical Society Press. Miyazaki is an adjunct faculty member at the Milwaukee Institute of Art & Design and will be an artist in residence at the Center for Photography at Woodstock in 2015. Miyazaki is also founder of the site collect.give, a platform that connects photographers to the charities they love.
Conceived of as a site-specific minimalist exhibition space, Window aims to stimulate thoughtful discussion around timely issues of representation within contemporary art in the local community and beyond.  Window is generously sponsored and hosted by Henco Reprographics, 54 Broadway, Asheville, NC  28801. Dispatches from the B.A.D. is a semi-regular column primarily focusing on exhibitions and events at non-profit visual art spaces in The Broadway Arts District in downtown Asheville.