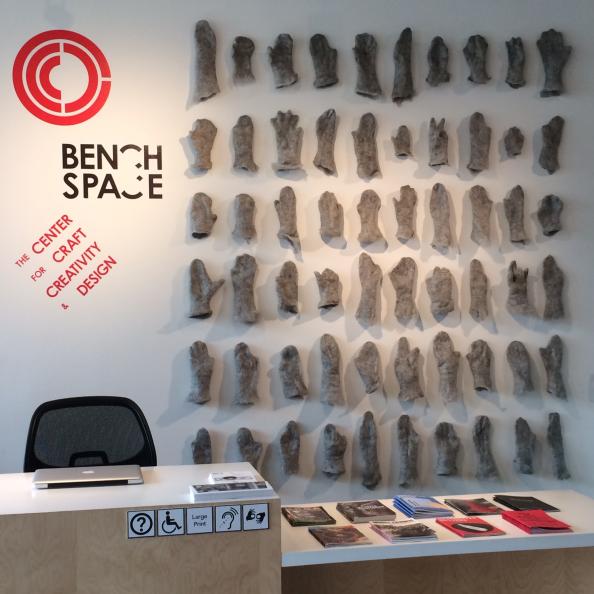 Image Courtesy of The Center for Craft, Creativity & Design

In order to preserve the quality and integrity of the artist responses to my questions, this post will be in two parts (look for Part II early next week).

The first weekend in April ushered in the spring art season in WNC in spectacular fashion, with the simultaneous staging of the 6th Annual {Re}HAPPENING at Camp Rockmont (the former campus of the renowned Black Mountain College), and the first of what will be an ongoing series of gallery takeovers called, Back to the Drawing Board, at The Center for Craft, Creativity & Design’s Benchspace Gallery.  Now, I’ve used the term spectacular as a descriptor here to be a bit purposefully provocative.  It’s a problematic term in contemporary use in that it connotes both the impressive, and the expected.  We are in awe of, for instance, “spectacular mountain scenery” but we know it so well (either from personal experience or visual reproduction) that we sometimes finish with it quickly.

Image Above:  Google Search Picking apart this term seems particularly apt when considering the experimental works produced for the {Re}HAPPENING and Back to the Drawing Board.  What often draws the spectator into a work are its spectacular qualities, most commonly originating from its aesthetic energy (flamboyant/flashy, intricate/detailed, bright/loud, etc.) that generally precede and sometimes override its specific content (socio/political, poetic/philosophical, personal/historical, etc.). Of course, not all works function in a manner that draws the viewer in with immediacy – many are purposefully quiet, or more ambiguous - and face somewhat different challenges. Ultimately though, for a work to function as more than mere spectacle, its maker(s) must find a way for its content to reach the viewer with equal measure, which is what we could (and often do) suggest distinguishes a work of art from purely decorative objects or displays.

The (somewhat) unconventional nature of {Re}HAPPENING and Back to the Drawing Board offer audience members an opportunity to challenge their preconceived notions of what constitutes a work of art by engaging with projects that stimulate the senses with their aesthetic properties while simultaneously provoking questions and conversation stemming from their conceptual underpinning, often centered around a research-based practice.  Tanya Aguiñiga’s project at Benchspace as well as a number of projects at this year’s {Re}HAPPENING melded these two sides with varied success.  In an effort to find out how the curators and artists felt about how their projects came together in the end, and whether the results differed from their initial expectations, I reached out via email to several with a couple of questions.

My questions, and their responses are below (with minimal edits for space and clarity):

Special exhibitions like Back to the Drawing Board and The {Re}HAPPENING are experimental, time-based events that invite artists to produce projects that rely on chance and improvisation, but that also necessitate careful planning and advance preparation.  How did you reconcile these seemingly opposing modes of practice as you readied your project?

We [had] countless phone calls and e-mails with Tanya [Aguiñiga] in order to understand her concept and goals, work out the details of set-up, volunteers, and materials, and sort out how to best explain the project to our audience. Committing our time and gallery to supporting the creative process means we also enter into the messy, unexpected, yet fertile ground that cultivates innovation, beauty, and creativity. The goal of the Back to the Drawing Board series was to invite our audience into this creative landscape as well. Keeping an open mind and remaining nimble enough to change course when needed is key to working in the realm of experimental and community-based art.

​Our piece straddles improvisation and planning in that there is an overall performative framework with something of a narrative arc that is decided before-hand but, at the same time, there is a good deal of improvisation as Matt [Cosper] and I use different techniques to work ourselves into ecstatic states.  We're never sure which techniques will work and how they will feed into a performance.  Also, "Later Rain" is site-adaptable and we often take unexpected characteristics of the performance space into account when we perform the piece.  The space at the {Re}HAPPENING offered some lighting options (natural, artificial) that we didn't expect but took advantage of.  We were also very surprised to find a white pulpit that we incorporated into the piece.  How perfect!

{Re}HAPPENING acted as a kind of laboratory for us where we could explore both performative and interactive aspects of our collaboration.  Keeping that experimental perspective in mind was key for us.  We are still in the early stages of figuring out how we can integrate performance-based audio with graphics and video and this gave us a dynamic, varied testing ground.

We also added in a microphone at the bottom of the stairs where people could interact with the [SuperCollider] program and the way it would process our sounds. If people stayed at the cabin for longer periods of time, they started to understand the way the sounds were affected and many of them experimented in making artistic choices about what sounds they put into the microphone and therefore the program. We prepared in advance by understanding the program and knowing how it would process sounds in different sections. I prepared in advance by following a musical score with my bass clarinet, but chance and improvisation was again encouraged by including additional instruments for other participants to use in addition to their voices.

The View From Deadhorse Point (Image courtesy of Erik Waterkotte)

"dis-card", was originally meant to be a two part project. Part one was the live performance in Grove Arcade - a site specific work to be realized in the public space with photographer Lynne Harty documenting rehearsals and the 2 performances. Part 2 was the screening of the edited stop motion film for The {Re}HAPPENING with a new version of the live performance adapted to the space and addition of the film. Because the film was edited over several weeks leading up to the {Re}HAPPENING, we did not have the finished film while we we rehearsed. We had a large unknown - how would we incorporate the film with live performance? We knew the spaces we would use, the gym and the lawn, but until the day before, all 6 dancers had not been in the space. We ended up developing an overlap of movement into the film and experimenting/projecting the film on the wall, instead of the screen that was available. We re-oriented the live performance to take advantage of shadows and other effects from our lighting we had not anticipated. Although rehearsals had started in December, the improvisation/changing the variables made the piece different every time it was performed.

The success of these kinds of art events is often contingent upon audience interaction and engagement, as well as the bridging of the aforementioned gap between spontaneous and calculated action.  Can you mention a few aspects of your project that you found to be particularly successful?  And, were there were any failures or portions that just weren’t realized quite as well as you had hoped? The beauty of working on a project like Tanya's Performance Crafting: Hand in Hand was seeing the participants take ownership over the ideas and process set out by the artist. In multiple cases visitors would stop in the gallery after noticing the sign outside and stay for over an hour, meticulously crafting with people they had never met before. While creating community was a goal of the project, experiencing it happen so naturally and with such joy and commitment was a definite indicator of success.  To be honest, we didn't have many "failures," the biggest challenge remains educating audiences.

…Our piece examines ecstatic states and how different people respond to them. Matt [Cosper] and I talked a lot about the way that intense religious services or rituals can affect people in different ways.  Strong believers may be consumed by the hysterical energy while those who are something of outsiders may choose to step back and observe it more objectively or simply decide to leave.  Choosing to leave is the most interesting for me.  Do they leave because it makes them uncomfortable or do they leave because they think that it's fake?  At the {Re}HAPPENING a couple of people joined in as they expressed agreement with some of the text that Matt speaks.  Other people simply observed and a couple of people walked out.  It's intriguing that, given the subject matter of the piece, all of those responses are valid.

The View From Deadhorse Point (Image courtesy of Erik Waterkotte)

I think some great ideas came from us responding to the work as the day and audience changed.  For instance, running our film during the daytime was difficult (even with the canopy of all of the trees) so I ran a large overhead projection with different transparency graphics and silhouettes inside the cabin until it became dark enough to see the film on the stretched screen on the porch of the cabin (pictured).  Also, as the evening progressed we encouraged more of the audience to interact with the microphones directly and I ran a mixing board.

There were many moments throughout the evening that were incredibly interactive, where I felt a real connection with someone making sounds into the microphone at the bottom of the stairs. Because many people at the bottom of the stairs were using their voices, it felt at times like I was really communicating with participants, that we were really speaking with each other (me with the bass clarinet and them with their voices). That is such a unique and special experience as a performer of classical music, because I am so often on stage and removed from those listening to the music I am making.

The beginning concepts for "dis-card" were very much reinforced during the {Re}HAPPENING. One of the things each of the dancers needed to discard was control and give into whatever the space brought to us. I really enjoyed having the audience surrounding the piece in the gym and including them in our lighting solution. We had lights on the floor but didn't want too much since we were going to be projecting the film. The dancers each gave a few audience members flashlights and asked them to follow a dancer with the light, which invited them into the space. This really added to the "see and be seen psychology of space" that was one of the original concepts of the work.

Next week:  Part II will include in depth responses and additional installation images from {Re}HAPPENING featured artists Jenni Cockrell, and Michael Dickins + McLean Fahnestock, as well as Gene Felice, who returned this year as a featured artist along with his students from the University of Maine Intermedia MFA Program.