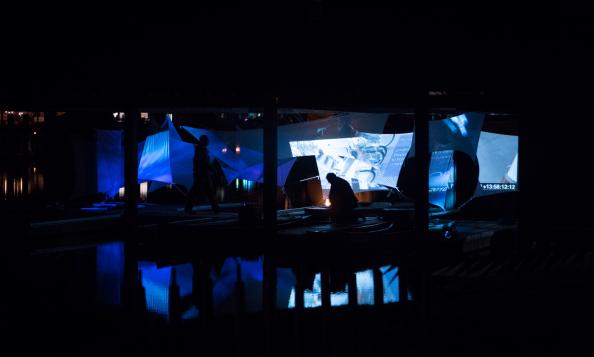 University of Maine Intermedia MFA Program Collaborative Work at {Re}HAPPENING (Image Courtesy of Gene Felice)
{Re}HAPPENING and Back to the Drawing Board – A Response (Part II)
In last week’s column, I opened with a section discussing the (sometimes) problematic nature of artworks being immediately identified as “spectacular”, often resulting in the content being overlooked, or disregarded entirely. Also emphasized was the need for the artist(s) to find a way to bridge the gap between intent and affect.

Affect is most often used loosely as a synonym for emotion. But [emotion and affect] pertain to different orders. Emotion is qualified intensity…It is intensity owned and recognized. It is crucial to theorize the difference between affect and emotion. If some have the impression that it has waned, it is because affect is unqualified. As such, it is not ownable or recognizable, and is thus resistant to critique.

- Excerpted from “The Autonomy of Affect” by Brian Massumi

And therein lies the (potential) problem. While Massumi refers to a socio-cultural critique, we can certainly apply this to art criticism as well. When certain forms are “resistant to critique” how do we apply its mechanisms as a means of evaluation? Are affect rich works immune from critical analysis simply by virtue of their presumed import as instigators of sensory response – regardless of what that response is?  Certainly there must be (or should be) criteria we can apply when assessing works that are (or are not) visually mesmerizing, while simultaneously full (or devoid) of content. Thoughtful analysis leads to multi-directional conversations between artist, artwork, and audience. How does/can this dialogue lead artist and audience to determine what is successful, or valuable?  And, isn’t the very nature of experimental work to take the type of risks that can often result in failure?  Is it possible for artist and audience to acknowledge or recognize failure - even embrace it as part and parcel of the project – while still holding the work up to rigorous critique?

Aquaphonic Scales (Image Courtesy of Gene Felice)
These kinds of questions are what initially led me to reach out to the artists and curators involved in CCCD’s Back to the Drawing Board and the {Re}HAPPENING. I wanted to give the creators an opportunity for self-critique and reflection, as well as a chance to articulate their process in relation to the production and execution of their works/performances/events. This week’s column continues with additional artist responses from those involved in this year’s {Re}HAPPENING.

• Special exhibitions/events like The {Re}HAPPENING are experimental, time-based events that invite artists to produce projects that rely on chance and improvisation, but that also necessitate careful planning and advance preparation.  How did you reconcile these seemingly opposing modes of practice as you as you readied your project for the event?
My current work revolves around a hybrid practice exploring relationships between art and science, specifically focused on microorganisms and our symbiotic relationships with them…[This was] the fourth time I participated as an artist at the {Re}HAPPENING, but it had been two years since my last project and my first year not serving as an organizer / curator, so I felt an immense amount of freedom to create and adapt my current practice to these grounds and waters that I know so well… Lake Eden is such an inspiring place to create with such deep histories, that you need to get a feel for it, either through pre-visits or by keeping an open mind for when you arrive the first time and breathe it’s air, feel it’s textures and get a taste for it’s unique qualities.  I think this also reflects the varied ways in which artists create in general.  Some create through rigorous pre-planning, testing, research, etc. and others create in the moment from a more automatic or subconscious source of inspiration, yet some have blends of both or bounce back and forth between modes, hybridized into the variety of art practices that exist in contemporary society.
Gene Felice, artist – “Aquaphonic Scales”

Aquaphonic Scales (Image Credit: Colby Rabon)
We knew that since we were creating a site-specific work we needed to see and document the space in order to plan out the placement of the sound components and the trees that we were going to map the video to. Back at home in our studios we worked on the [audio and visual] content for the performance separately. The chance and improv really happened on site during the event. We had to work on the fly, waiting for the sunset to set the video maps to the trees and pressing play ten minutes later for our chance to see our work really for the first time along with everyone else at the event.
McLean Fahnestock, artist - “Launch”

Launch, Artist's Conception (Image courtesy of McLean Fahnestock)
Figuring out how to use the unique layout of the cabin was imperative so that the feeling of the installation was organic and not forced.  Then the dancing/performing itself was improvised, created in the moment for each participant who wanted a Tarot reading.
Jenni Cockrell, artist/performer -  “Butoh Tarot” • The success of these kinds of art events is often contingent upon audience interaction and engagement, as well as the bridging of the aforementioned gap between spontaneous and calculated action.  Can you mention a few aspects of your project that you found to be particularly successful?  And, were there were any failures or portions that just weren’t realized quite as well as you had hoped?
A particular success was the audience interaction. I received over 50 samples in a two-hour period, which was far beyond my expectations. As it turns out, it was also far beyond my ability to analyze / explore these microcosms in the hour and a half that I had allotted myself to capture video microscopy for the evening projection mapping / audio performance.  I am still honing my microscopy skills and I realized after getting through about a dozen samples in the allotted time, that I wouldn’t be able to scan, document and edit all the samples before starting our performance.  That being said, I was able to project the samples that I completed and they became an integral part of the evening performance / projection.
Gene Felice, artist - “Aquaphonic Scales”

Aquaphonic Scales (Image Courtesy of Gene Felice)
The biggest challenge seemed to be crossing the bridge between performing/dancing and explaining to participants what the installation was all about and to invite them to draw a card.  I originally planned on not speaking at all and had "instructions" typed up, but that ended up not working, so I found that speaking quietly and concisely was a better method and made people more open to what was going on.
Jenni Cockrell, artist – “Butoh Tarot”

Butoh Tarot (Image Credit: J. Smilanic)
The people who were able and willing to approach the work and engage with the rumbling platform really got the full experience. As for the video, working with found footage, I have learned that things aren’t always going to look exactly how you envision them. In my mind, there was more smoke than in real life.  We had a different sonic idea as well. Looking back, we could have done some things differently but that is the beauty of the event. You plan, you do it, you learn from it.
McLean Fahnestock, artist - “Launch”

Launch (Image Credit: Daniel Abide)
LOOKING AHEAD
The Center for Craft, Creativity and Design provides additional opportunities to engage with this type of community-oriented, experimental work with their Back to the Drawing Board series which continues through August of this year.  For a listing and description of events, visit their site HERE.
Dispatches from the B.A.D. is a semi-regular column primarily focusing on exhibitions and events at non-profit visual art spaces in The Broadway Arts District in downtown Asheville.