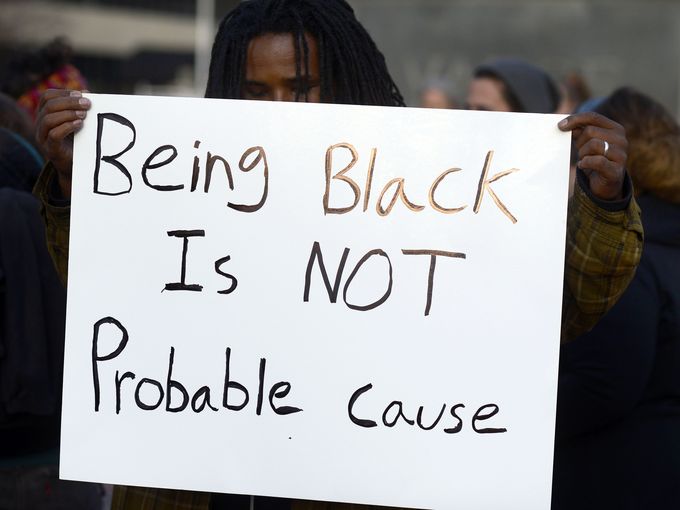 Above: resident of Asheville: Calvin Allen. Photo from the Asheville Citizen Times

This is a time where I have never felt more frustrated, scared, and amazed. I have to say, the protests, the die-ins, the walk outs, the vigil's, etc. are all something that I used think I'd only get to read about but never participate in. This civil rights era-esque movement that has started back up (it never truly left) has allowed me to see a lot. It has allowed me to see several sides of different people's stories:
There are those that think the protests should not be about race and that the rulings have been fair.
There are those that think the rulings have NOT been fair but that the protests should not be about race.
There are those that solely believe that police brutality is an attack on African Americans.
There are those that see it as a perpetuation of discrimination against people of color in general.
Some have been silent. Some do not care. Some sit back and say, "well, this doesn't affect me".
People can agree or disagree with any or all of the statements above. And everyone has the right to. But what truly matters at the end of the day is for the silence to stop, that the conversations continue, and that action happens.

Check your Privilege. PLEASE.
No matter what side or what argument you're coming into the conversation with you must admit first and recognize that lives have been lost. Then you have to take a moment to do something I think EVERYONE needs to do more, and realize.
Check it by asking yourself what do you think cops are supposed to do, ask yourself if you've ever felt profiled by cops, or if you've ever been given any reason to fear the police, or if the police would be the first people you'd call in an emergency or dangerous situation. Now this is by no means a science, and I am not an expert. But one of things that tends to affect conversations I've been able to be a part of is the difference in privilege and the inability of one or both parties to check themselves and truly think about where they stand in all of this.
Don't think just because you're down for the cause that you are exempt.
There are so many allies to the fight against discrimination in the form of police brutality and it is beautiful. Let me start with that and put that there. Now, let me also say that it is important to remember that just because you are down for the cause, does not mean you will ever know what it feels to be part of the group that is ultimately feeling discriminated against. And this ties to privilege again. So many folks think that because the read the books, go to the protests, plan the protests, hold up a sign, or whatever it may be... solidarity does not mirror empathy. Solidarity means standing together, and realizing that if you are not a part of the oppressed group, standing in solidarity will never make you a part of that group.
Don't think that just because you feel that this doesn't affect you, that it doesn't.
It amazes me the density of rude political posts about both sides of the spectrum during election season. I mean people are posting and posting and posting, it doesn't stop. Low jabs about Obama calling him trash, and Low blows to the Republican candidates calling them all bigots when I hope that people know that isn't always the case. And yet, when several Black youth are killed. A Black man is placed in an illegal chokehold (not illegal by the people protesting's standards, but by the very law the police rule by's standards) and the man who does it doesn't get indicted even though its caught on video .... There's silence from those people. There's silence from those Obama-haters, and Republican-bashers. People are losing their lives at the hands of police, some of the same police meant to protect YOU and your family...and people are silent??
I'll leave that there. 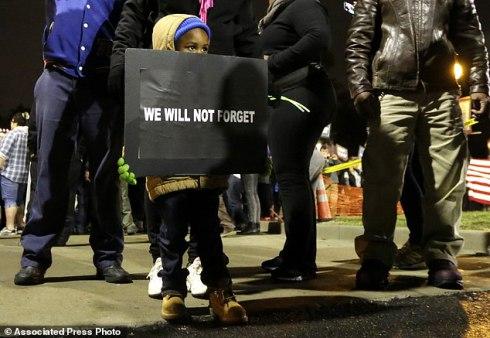 From the perspective of women and mothers of color, these attacks have disproportionately been on young black boys, on men that they see as their fathers, brothers, uncles, cousins, nephews, and even worse, their sons. The killing of young Black Youth, not only makes youth scared, but their families and friends.
Tamir Rice was 12 years old.  I have a little cousin that isn't 10 yet. I tutor little boys that are his age, and Tamir's age, and Trayvon Martin's age. They enjoy and do things that little boys do, football, video games, running around with their friends etc...How are we supposed to teach them to trust and be cautious of police at the same time?
One day, I dream of having kids. In my head, and in conversation I always talk about how I want to have a boy. And in light of the recent tragedies dealing with African-American boys and men, I can't help but be scared, because no matter who I marry, if I have a little boy, he will be a person of color. He will be, at least partially Black. And so how do I go about looking my baby boy in the face and giving him the "Existing while Black" talk?

The issue at hand is that police brutality is against the law. Whether people are guilty or not. Police are figures of society that have sworn to protect and serve. And there is a huge portion of the population in the U.S that do not feel safe. That do not feel like they can go to these people meant to protect them in the first place.
I have waited until the end to voice my opinion.
I believe that this is an issue that affects everyone. I do not believe you can take race out of it. I do not believe that whether the person in question has a criminal record, or is on probation, is from the hood, or was raised a certain type of way and that that somehow contributes and merits being treated brutally by police.
I think this is a conversation for everyone. So for those that have been silent, for whatever reason... wake up. Look around you. Just because this is happening more to people of color does not mean it couldn't happen to others. It means that part of our society meant to protect EVERYONE isn't protecting EVERYONE and therefore EVERYONE is at risk.
This conversation cannot stop because the deaths and mistreatment continues to happen.
How can we hold policemen accountable? How can we truly move forward and CHANGE things? These are the questions we need in the conversations we need to be having.
Now, to take a moment to respect and pay tribute to some of the youth that lost their lives because of all this.

Now to pay tribute to the a few adults who have lost their lives recently because of this.

There are so many different things that could be talked about in a post like this....please know the conversation isn't over.
If you want to contribute anything or have any thoughts please comment below.
SWC