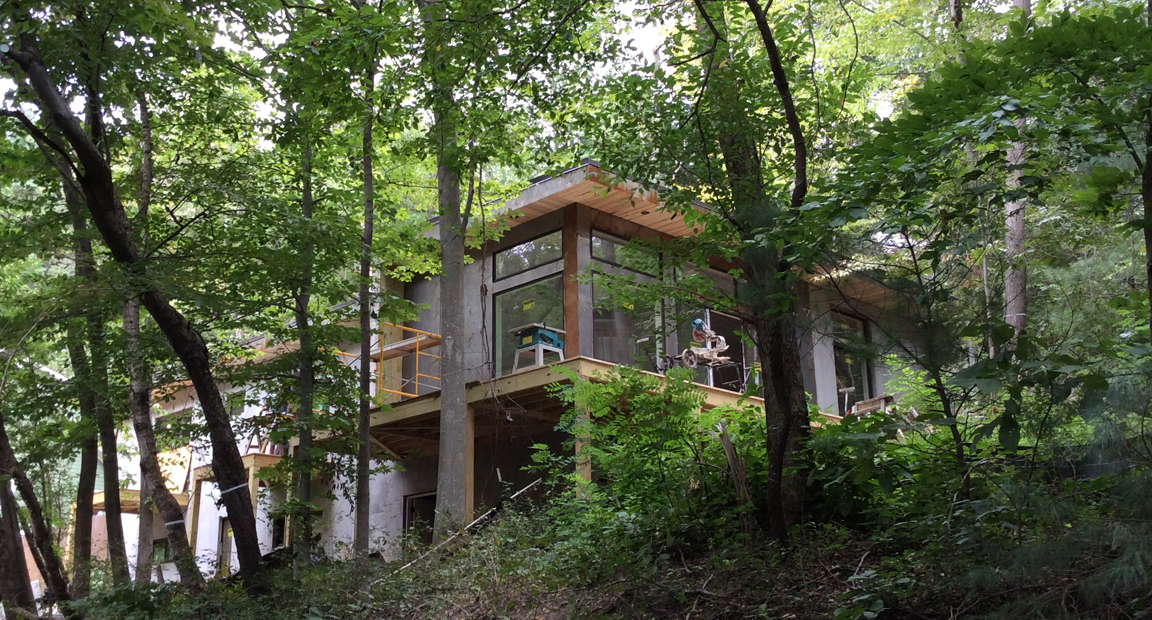 Kelly and I were lucky enough to get a tour of one the latest residential constructions in Kenilworth. The modern home is being built by our friend Greg McGuffey of Earthtone Builders. Greg, along with his artist client, took on the bold challenge of building a uniquely concrete house made entirely from Superior Walls. The walls are exposed to the exterior, along with corten steel and reclaimed wood. Exposing structural concrete first originated the stylistic term of Brutalism in architecture.

Brutalism, as it became known, flourished from the 1950's to the 70's. The style was for its functionality and expression of materiality. This term did not originate from the word "brutal", but from the french words "beton brut" or raw concrete used by Le Corbusier and then transposed into "Brutalism" by architecture critic Reyner Banham.
While the idea of a concrete home may seem severe, the home is actually graceful as it carves out a flowing and livable container tucked into the steep sloped lot.

The main living space of the home is generous and light filled carving out views into nature. Access paths to the home for both cars and feet are cleverly carved out through use of Ecology Blocks, oversized concrete blocks made from leftover concrete from returning trucks. Kelly and I loved these and imagine how these will look when aged and juxtaposed with the natural environment as it grows in.

The upper level is 3 bedrooms and 2 baths within 1600 sqft. The 900 sqft lower level will have the garage/ceramics studio and an additional bathroom. The Superior walls of the home have an R value of 32 to hold up the substantial roof. The roofing is a TPO membrane and is designed to hold a future living roof and potential solar panels.

While the artist wanted to retain much of the forest surrounding her home it was challenging given the nature of the lot itself. The wood removed was reused in the construction. Locust was used for two of the individual desks off of the bedrooms. Poplar is being used in the eaves of the roof, for the kitchen cabinetry and shelving and, lastly, as inlays into the concrete floor of the home.

Even prior to completion the concrete home has a timeless permanence about it. It is a refreshing change from current standardized construction going on in the area. It is a big risk doing something different, but the reward is a solid, low maintenance home that is unique unto itself and will age well while blending into the natural environment.
Well done!
-Troy