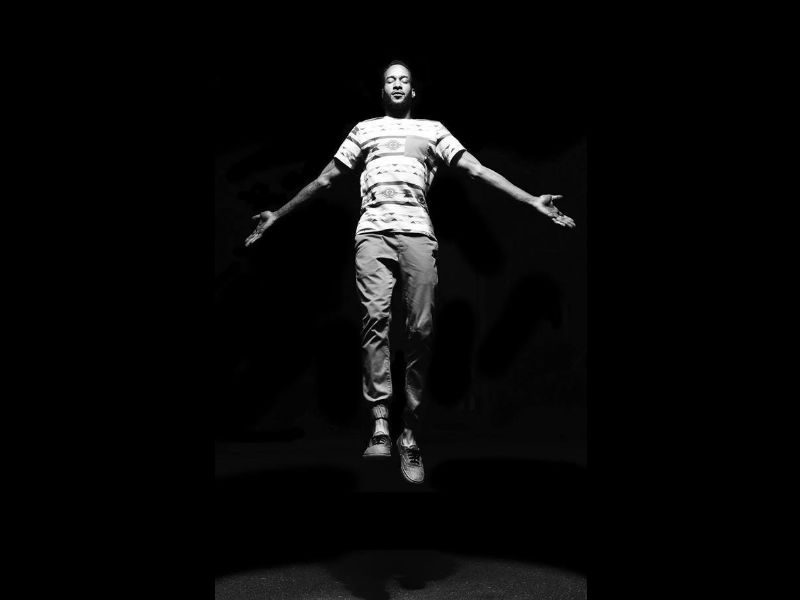 When North Carolina producer DFLN (Dreams From Last Night; Derrick Curtis) passed away unexpectedly in July, a community was left grieving. Derrick Curtis's talent was recognized widely in the electronic music scene, and not just on the local level: he had recently joined the Berlin-based label Deepblak and was working on several projects with its founder, AYBEE, who wrote of him, "I knew instantly he had 'it'…he had that 'thing.' His sonic world was beautiful. Full of color, depth, and narrative. Listening to his stuff was a cinematic experience." Curtis's life and music will be honored during the next BEATLIFE event, presented by the Asheville Beat Tape Collective at the Mothlight on September 17th.

In his daily life, Curtis was known for his quiet nature and his deep humility. This humility is contrasted by his music, which has been described as explosive and virtuosic. BEATLIFE organizer Paul Gaeta, a friend of Curtis's, noted that "Derrick was one of the best musicians and producers in our circle. ... He had so much potential. Our friend Rodney [Raleigh-based artist Oak City Slums] liked to joke with him after just playing one show together that he was the greatest of all time. There's some truth to that. There's no true 'greatest of all time,' but he was a great producer, and he was a very humble producer."

Besides his talent as a producer, Curtis was also an accomplished instrumentalist (he played the saxophone) and vocalist.  He leaves behind a significant amount of music, though much of it is unreleased with no current plans for distribution. His first and only full-length album, Darker Than Black, was released on Gaeta's Circuitree Records label under his previous moniker Deflon. Gaeta and partner Kent Hernández "were lucky enough to put out his first album."

"I met him through Nigel [Geiger] over the internet," says Gaeta. "I was starting to get these tracks from him and I was like 'Man, you should totally do an album. You have all this material.' I helped him curate it, gave him some feedback, and it's awesome, it stands the test of time."

The tribute show will feature artists playing music they collaborated on with Curtis, or sets will be inspired by his significant legacy. Gaeta will be playing some of the music they collaborated on from his 2014 Panther God LP, Golden Changes (Outside Recordings), as well as tracks from their project The Mighty Jungle. Beat Tape Collective founder Nigel One (Nigel Geiger) will be traveling down from Michigan to play music from collaborations with Curtis, and hip-hop artist PHAZE GAWD (Tony Potts) will be coming from Charlotte to perform a few songs from the EP he recently released with Curtis, Definitive Theosis. Read our interview with PHAZE GAWD here if you missed it.

Derrick was a very shy person in public, but his music was very clear and very powerful and his voice came through in that way. He was a really fast learner; I don't think he'd been producing for more than seven or eight years total, but in that time the amount of music he made is pretty astounding. Most of it is unreleased, I don't know that any of it will be released, but he was able to finish--he made finished products, and that's what makes a producer a skilled producer. Thousands of people every day make things that they don't finish, because finishing things is what is so hard about being a producer. That final 10% takes 90% of the time, and Derrick had a gift for finishing things quickly in a very protracted process. His particular process is what gave him that sound, and working with him the little bit that I did I saw that he took way more time in that process and got a specific result. He wasn't cutting any corners. He did it in the most painstaking way.

Another reason for the show will be to share Curtis's music with people who may not have ever heard it, or who knew the producer in a different context. "It's a chance for [his family] to see who Derrick was as a musician," says Gaeta. "Everyone's following their dreams, but to have some sort of idea of where a person stands outside of the family, what his role in the community was, and how other friends and other artists saw him, you can only really put that on display in a way like this. This label out in Berlin [Deepblak] just did this honorable tribute set for him on the radio, and Derrick's family got to hear that."

Deepblak's founder, AYBEE, also released a nine-minute video that he dedicated to Curtis. "The film was originally supposed to be a lead into an upcoming project," said AYBEE in a statement on xlr8r.com, "but with the sudden passing of DFLN during post production I decided to make it a dedication to him. The film involves an encounter with a gatekeeper to the other 'side' in the hopes of delivering a message."

The night's lineup will feature sets from Axnt, EmE, Deku, Brother Aten, Nigel One, Panther God featuring Musashi Xero and PHAZE GAWD, Prof. Logik, 10th Letter, and Cosmoore. These are some of the best beatmakers in the business, and their decision to come together for this show is a testament to Curtis's immense talent and, beyond that, a very lucky thing for fans of beat music in Asheville and the region.

The show is, ultimately, about celebration. "We're celebrating the life, times, and artwork of our deceased family member," says Gaeta. "I'm sure throughout the night at least a third of what you hear Derrick will have touched or made. But we haven't tried to control that too much. Everyone has to pay honor to him in the way that they see fit."