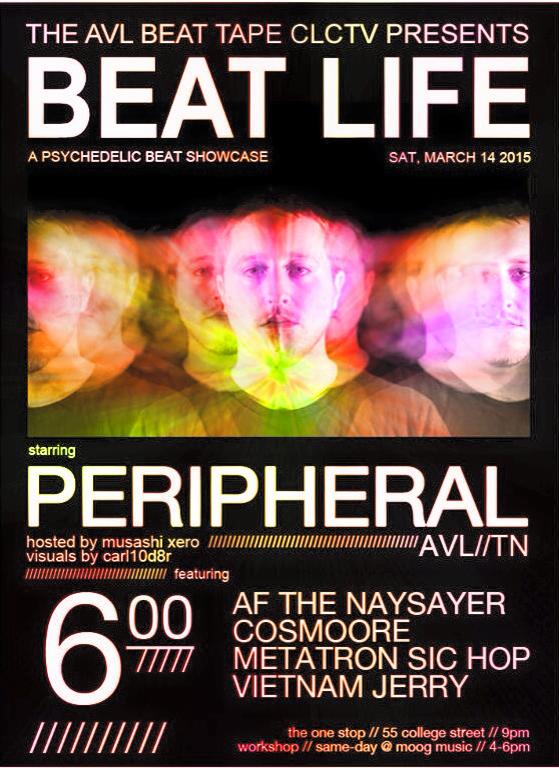 Saturday, March 14, the Asheville Beat Tape Collective brings their distinctive BEAT LIFE sounds to the One Stop for a full evening of beats featuring P3riph3ral, AF THE NAYSAYER, Cosmoore, Metatron Sic-Hop, and Vietnam Jerry, that will keep you moving until the wee hours of the morning. This night will feature local producers alongside artists from Tennessee and New Orleans. The Beat Tape Collective is constantly pushing Asheville’s electronic music horizons further, bringing in new and innovative acts from afar as well as highlighting up-and-coming local talents. Below, I’ve compiled a little taste of what’s in store for your night out.

The sweet music of P3riph3ral will be a central part of the evening’s experience. In his tracks, layers of sound build from the bass up, and the beats are always smooth and deep. “Robot Love” (below) is a perfect example of how P3riph3ral can infuse songs with qualities that are equal parts sensuously earthy and sublimely technological. It’s a sexy track with a satisfyingly dark edge. Snippets of vocals weave in and out of thudding beats and eventually segue into a shimmering landscape of higher notes with blurred edges. His songs are as much lilting as they are grounded. Listening is like walking on the earth but looking up into the night sky. P3riph3ral’s 2009 EP, Elli-Veh-Sa (available for free download) was dedicated to Asheville, and the sounds are definitely infused by the cityscape. Song titles are references to spots in town, like Helen’s Bridge and Charlotte Street. P3riph3ral is obviously inspired by landscapes around him, as his music consistently makes clear. But he’s also just as much informed by the industrial, the gritty, and the neon-lit darkness of the club. The interweaving of these very different settings is effortless, and songs like “Blue Dream” start off conveying sweeping vistas before dropping you squarely in the center of a bumping a warehouse party.

AF THE NAYSAYER hails from New Orleans by way of the West Coast, and his music possesses both the stylish production of Los Angeles and the lush, soulful sounds of NOLA. It’s experimental but never inaccessible, blending elements of jazz, hip-hop, R&B, and funk. Tracks get down and dirty but consistently sustain and hone their cerebral edge, driven by an intellectualism and an attention to detail that allows for the creation of complex, organic sounds. As someone interested in the complex interplay of musical components, AF creates most of his own sounds but blends samples in through the process of organic synthesis in the spirit of his influence Jan Jelinek. His debut EP, The Autodidact Instrumentals, Vol. 1, is a groovy love letter to AF’s varied influences and to his own process of creation. It’s a funk-filled exploration of sound with a big helping of Afrofuturism. Listening to the EP is like exploring the solar system in your own funky spaceship, complete with purple shag carpet and a dope-ass sound system. He also recently started his own label, Self-Educated Vinyl, so we’ll be seeing more work from him—and from artists like him—coming out in the near future.

Stay tuned for my interview with AF THE NAYSAYER (and album review of The Autodidact Instrumentals), coming soon!

AF THE NAYSAYER will also be doing a workshop on Using the Moog Werkstatt-01 at the Moog Factory on the day of the show. RSVP by calling 828-239-0123 or e-mailing paul.g@moogmusic.com. There are only a few spaces left, so get on it.

Cosmoore is bringing the harmony of the universe to the stage with his expansive sonic vibrations. It’s not an accident that his name shares so many letters with “cosmos.” Listening to his dreamy tracks is a transportive experience that leads to the astral realms. It’s also heavily influenced by Eastern mysticism, as tracks like “Sanskrit” (below) make clear. Sampled chanting and haunting snatches of song intermingle with higher notes that sound like bells, all layered over a pulsing beat. Cosmoore also draws inspiration from nature, but it’s more about pulling in the energy of Gaia rather than being influenced by a specific landscape. He takes a shamanic approach to music-making, crafting sweet sounds that invoke transcendent experiences.

Metatron Sic-Hop is a duo hailing from New Orleans. They throw down impactful hip-hop vocals that are both acerbically aware and laid-back over the top of chilled-out beats that roll over you like waves. Metatron is the name of the archangel who recorded the word of God. The shoes are big, but Metatron Sic-Hop more than fills them, layering poetry over deeply grooving sounds that stretch and contract over the course of a song. They also play with distortion and other effects, experimenting freely with the tools at their disposal to craft innovative music with a razor-sharp edge.

Vietnam Jerry is a local producer who creates irreverent, bass-thumping sounds that pull from hip-hop, trap, funk, video games, and countless other influences. His songs are infinitely danceable and will provide the audience with a perfect dose of thumping bass to move to. There’s a lot of humor and awareness in pieces like “SpaceSmurfJorgy” (below), a fifteen-minute long aural journey through a landscape of Vietnam’s Jerry’s own design, filled with samples and send-ups that pay homage to rap and electronic music. It’s good stuff with a deep, unique flavor that is truly all its own.

And if that weren’t all enough to get you out, Musashi Xero will be emceeing and performing songs throughout the night. CARL10D8R, who did the visuals for the 10th Letter show at the Mothlight last month, will be back to grace us with his hallucinatory imagery.

For more information and tickets, visit the One Stop website