My photographer friend and I are directed through to the main room of the Orange Peel where The Polish Ambassador crew are soundchecking. It’s Ayla Nereo’s vocals that stand out first, her honey-like voice winding through the streets of Polish’s bustling city of beats. Boston-born conscious hip-hop fave Mr. Lif is there too, getting his levels on a new collaborative track called “Shine Bright”, a delicious funk song that heats up even the chilly, empty venue.

Like typical touring musicians, the crew is here to support a new album, TPA’s Pushing Through the Pavement, but perhaps in an even greater way, they are pushing something quite unusual for the electronic scene: their accompanying Permaculture Action Tour.

The artists, with the help of a team of organizers and sustainability experts, are bringing their passion to not only music venues but farms, gardens, and even lifeless lots in 32 cities across the country. The day after every show, dozens and even hundreds of fans gather alongside the TPA troop to build, enliven, and connect: to the earth, to each other, to themselves. It brings tangible meaning to “party with a purpose.”

But before we get to all that, I want to know more about the woman behind the voice that’s become a staple of TPA’s sound. We’re sitting backstage in Ayla’s dressing room: clothes, bags and jewelry options strewn about (she’s just like us, girls). Gracious and at ease, she’s warmed up her throat and changed into her stage outfit – a bangin’ capri-length, white and silver bodysuit, keeping in line with the jumpsuit theme that rules the TPA Family.

Having grown up in a musical family, I ask her if singing is something she always wanted to do.

“No, I was actually terrified of singing!” she admits, “I thought I wanted to be a film director...but it just started happening, songs started coming through.” Now she regularly teaches workshops on how to use the voice effectively and work through the fear of expression. “I think it’s an important piece that I was afraid of: using my voice. I had to go through the fear process.”

It certainly wasn’t a sense of fear that eventually found her writing rich, lyric-driven folk music and wanting to experiment with different recording processes. It was in the Oakland Ecstatic Dance community that she met producer David Sugalski, aka The Polish Ambassador, and started collaborating with him. “I had just finished my second to last album called BeHeld, and it had the first loop songs on it. Those loop songs were catchier and created those hooks, so I was asking a lot of the producers in the Ecstatic Dance community [to collaborate], and David was one of them.”

We don’t get into the juicy details of how they subsequently fell deeply in love (awww) and formed their duo project Wildlight, but I do inquire into the fascinating subject of navigating a romantic and professionally collaborative musical relationship.

“It’s all very, very woven. We tour together, we live together; it can get muddy sometimes. But the other piece is true; we also get to bring love in. The best shows are the ones where we’re in love with each other on stage the whole time. It’s carrying the music, too.”

It seems that they all carry each other. This theme leads us into the twin aspect of the Pushing Through the Pavement tour: the Permaculture Action Days.

What began as a rolling stone idea of Polish’s quickly gained traction, and a crowdfunding campaign was initiated to meet the financial needs for tools, supplies, education materials and organizers. The campaign was successful enough and took off, quite literally on the road, still with little idea of how it would turn out or who would actually show up to support the idea.

Ayla gushes: “The goal was just to bring some action days on tour, and it quickly grew into this thing where every single city was like, ‘We want an action day!’ It became a big part of the momentum and the draw of this tour and the excitement around it. That, for us, has been really encouraging to see people’s interest in what we’re doing.”

She is relaxed and lucid as she remembers the disillusionment she sometimes felt on previous tours and how that’s flipped with this fresh sense of purpose. “It’s giving me a lot of hope to see what’s already going on in these communities...we’re trying to take all this fan energy and direct it...so they can be connected and not so reliant on this system that’s not working out.”

I imagine it’s difficult enough to be a touring musician, but pile manual laborer on top of that, and it must bring a whole new level of exhaustion. Nope. Not this crowd. She beams as she tells me how high the energy runs out there on the land.

“[That’s] the cool thing about having 100-300+ people at an action day. We’ve never been overworked...because there are so many hands on deck. That saying ‘many hands make light work’ is so absolutely true. We are seeing it. It’s giving me chills. To see how quickly and how easily things can happen because we’re all helping each other. We’re not on stage, we’re all just people, and we’re working on something together. It’s so much fun.”

The united focus is strong within Jumpsuit Records, the record label started by Polish and currently rebooting itself as a collective. “The idea is that we’re all in charge, we’re all going to decide who comes in, and we’re all going to promote each other.”

And after experiencing the success of the Permaculture Action Tour, they clearly can’t go back to the old model. “We’re focusing it around action-based touring and activism in that way, being a participant in the creation of this world that we want...together.”

Due to the shitty weather Halloween weekend, Asheville’s action day was relocated to the downtown bar Sovereign Remedies for a few hours of discussion and brainstorming, and it appeared to be a success in itself. It took me quite a while to even notice Ayla and David were there, blending perfectly with the earth-toned group, occasionally facilitating discussion but mostly enjoying Asheville community members forming connections and presenting their own ideas. Needless to say, they really dig Asheville. *swoon*

That’s what this is really all about for them: using their popularity to activate communities to sustain themselves.

“As artists we have a platform, and there’s a responsibility there to use it for the greater good. Whatever your platform is, there’s an ability to do something good with it.”

The Permaculture Action Tour is almost over, but tune in with The Polish Ambassador, Ayla Nereo, and the whole Jumpsuit Records collective to take part in the revolution. Oh, and all of their music is still Name Your Price. Dig it, y’all. 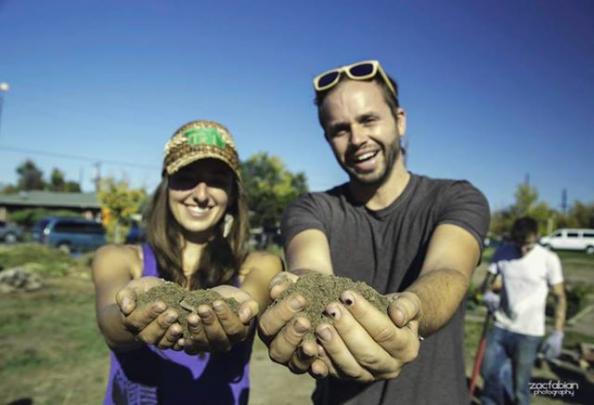 Photo by Fabian Productions via The Polish Ambassador