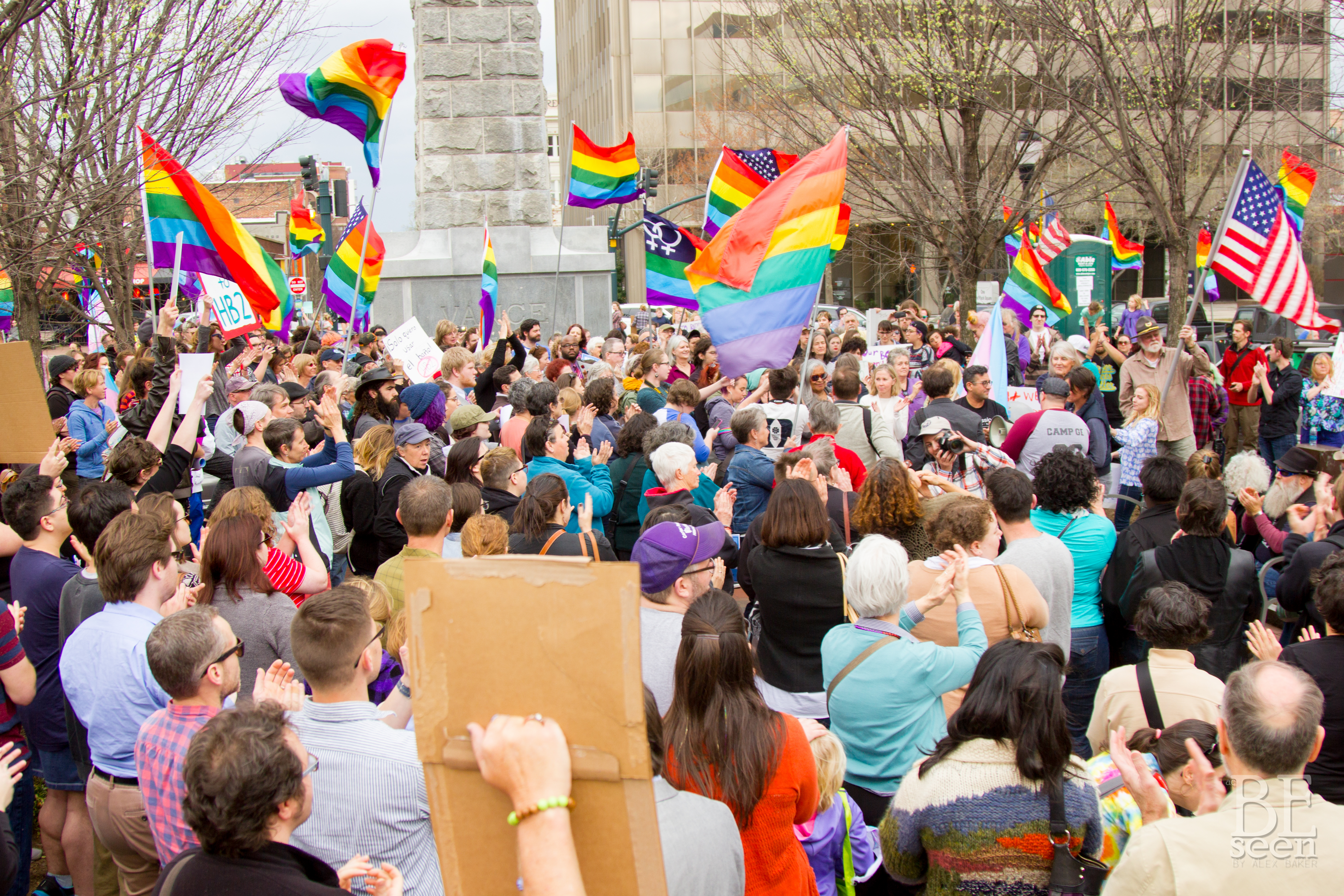 It came, for many of us, as a complete shock. HB2, known as "the Bathroom Bill," was a resolution that blindsided the community and with after-shocks that continue to shudder across the state. Its effects were felt immediately as slices of the community banded together to protest its regulation of bathrooms.

As the days have passed, it became apparent that bathrooms were the tip of a deep, dark iceberg that also limits (nay, completely throws out) employee rights to stand up against workplace discrimination on the basis of gender. The legislation feels dirty and devious, passed through quickly by elected officials that never had anyone's best interest in mind.

HB2 is a backwards, narrow-minded, fear-based bill,1 and its passage reveals just how fractured our society is at the moment. The deep divide between liberals and conservatives has not been so sharply rendered at any point in my lifetime. The Republican party I remember from my own childhood always included the religious right, but it seemed to be on the fringe--to me the party always seemed to be made up more of people who cared about fiscal, rather than moral, conservatism. Now the most religious, farthest right of the party seem to have completely taken over, to the point where one of the central tenets of the party--the belief that the government shouldn't meddle in the affairs of businesses and individuals--seems to have gone out the window.

But for all of the horrible things continuing to come to light regarding HB2 and those who passed it, one thing has become clear: Asheville is a community made up of people who are fiercely protective of each other, and who are willing to step up, big time, for what they believe in. Asheville has long been known for its ethos of inclusivity, its openness to people from all walks of life. As a prime destination for LGBTQ visitors, its progressive outlook has been a light in a very dark night. And although the people of Asheville aren't sure when this dark night will come to and end, rest assured that we will stand together until it does. We're proud of how Asheville has been standing up, and that makes us even prouder to call it home.

A Timeline of HB2

February 22, 2016: The city of Charlotte revises its non-discrimination ordinance to include protections for people in places of "public accommodation," like bathrooms. Reactions are immediate, and by the next day NC House Speaker Tim Moore has called for a revision of the ordinance.

March 21, 2016: A special session is called by NC lawmakers to discuss the ordinance. Governor Pat McCrory says that he is not in support of calling this meeting.

March 23, 2016: Despite his initial unwillingness to meet, Gov. McCrory signs HB2 into law after it's passed by the NC General Assembly. The bill stipulates that people must use public bathrooms according to the gender listed on their birth certificates. Going one step further, it also prohibits local governments to enact non-discrimination laws and prevents citizens from taking action if they feel they've been discriminated against at their workplaces.

March 26, 2016: San Francisco bans non-essential travel to NC for city employees. Other cities and states are quickly added to the list.

March 29, 2016: By the end of the month, the ACLU and several other organizations and individuals file a lawsuit to challenge HB2.

April 5, 2016: PayPal cancels its plans to build a new global business center in North Carolina. Approximately 400 jobs would have come with the center. Other companies, including Apple and Coca Cola, follow suit. Author Sherman Alexie cancels all visits to NC bookstores to promote his new children's book. Among these is Asheville's Malaprops Bookstore and Cafe.

April 12, 2016: Governor McCrory signs an executive order to reverse the ability of businesses to fire employees because of sex or gender identification.

1. Despite the argument that allowing free restroom access would increase acts of violence against women in public bathrooms, statistics overwhelmingly show that transgender people are more often harrassed in public places like bathrooms if they use the bathroom that fits the gender on their birth certificate. According to Lambda Legal, "53% of 6,450 transgender people reported being harassed or disrespected in a place of public accommodation in a recent survey conducted by the National Center for Transgender Equality and the National Gay and Lesbian Task Force." Multiple court decisions have aligned with the wishes of transgender people seeking accommodation in the bathrooms they choose based on the gender they identify with. For more information, check out Lambda Legal and see this post from Media Matters.

* Some timeline information from http://www.mcclatchydc.com/ *

* All photos from Alex Baker/ACBe Creative