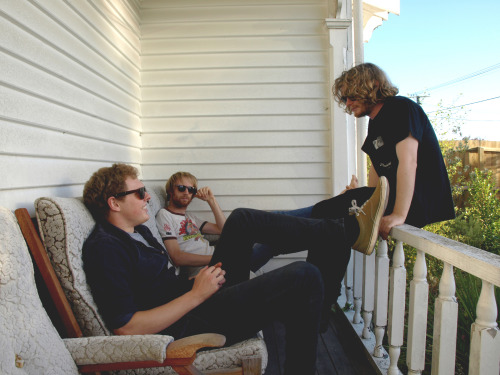 Sometimes location is everything. The Salad Boys came together at the end of 2012 in Christchurch, New Zealand; a country whose infamous musical legacy is so woven into the fabric of modern independent music, many hardly realize it’s there. The band formed as many do, with members Joe Sampson (12-string guitar/vocals), Ben Odering (bass) and Jim Nothing (drums) mucking around in their spare time from other groups (T54, Bang! Bang! Eche!, The Dance Asthmatics), fleshing out spare song ideas that Sampson had in his back pocket. The band’s name comes from a misheard line in the second verse of The Feelies song “Fa Cé La” - a joke name that they had assumed they’d change eventually, but never did. It was all too casual, but with an end-goal to create something all too serious.

Live, The Salad Boys perform a wondrous assault: a charged up blitz of clanging guitars, intoxicating drones, head-down acid repetition and an abundance of dazzling pop hooks - birthed in the band’s living room rehearsal space, and perfected in a live setting. Their reputation has scored the group a wealth of engagements up and down New Zealand including slots at the Camp a Low Hum and Chronophonium festivals, gigs with Sebadoh, The Bats, and Parquet Courts as well as a highly honorable spot performing as backing band for David Kilgour of legendary New Zealand group The Clean. The band prefers things on a smaller scale, however - finding joy and inspiration playing DIY spaces & house parties. That spirit combined with the band’s dizzying live intensity bring an underlying urgency to both the rocking and mellow tunes on Metalmania.

Asheville Audiophile: Thanks for taking some time to answer a few questions. We are stoked for your US tour and your stop in Asheville. I saw The Clean last year on an island in the middle of our French Broad river. Needless to say, it ruled; and I was immediately hooked on your tunes.

Salad Boys: Cheers man, much appreciated. We’re really looking forward to coming to Asheville – we read all about it in the Lonely Planet guide. I hope it’s an accurate account haha.

AA: The scene in NZ (and Christchurch) with Flying Nun Records is quite the cult following amongst music nerds. How has being a part of it influenced your sound and connections to the scene outside NZ?

SB: We love most of those bands and they’ve played a big part in shaping our sound. Having the Flying Nun association has definitely helped focus international attention on current NZ bands but it can also be the cause of unfair comparisons and pigeonholing.

AA: Where does the name Salad Boys come from?

SB: It’s a misheard lyric from the Feelies’ song “Fa Ce La”. We thought Salad Boys would make a great band name so we went with it.

AA: What are the origins for the album name “Metalmania”?

SB: In Christchurch there’s a scrap metal outfit called Metalman, I saw it painted in big letters one day – Metalmania came from that. It was an attempt to be spontaneous.

AA: You guys played Gonerfest in Memphis. Again, this total rock nerd scene in the U.S. Thoughts on that?

SB: It was great! One of the best shows so far. They were really hospitable and there was a great atmosphere at the shows we went to.

AA: Do you have anything you are looking forward to on the U.S. Tour?

AA: Anything you are dreading?

SB: Some of drives seem pretty long. It’s a big country, much bigger than where we’re from.

AA: Do you know the "marry, fuck, kill" game? If not, pick someone famous (one for each action) that you would want to marry, fuck, and/or kill.