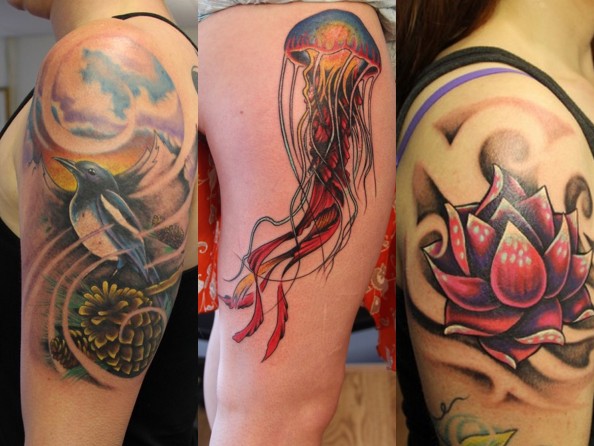 Google "Asheville tattoo" and seven local shops fill the page, each with an intriguing moniker that clicks through to websites filled with flash from the artists that call it home. Walk the streets of downtown and you’ll find more than half of them. From the buffet of shops to the artists offering styles ranging from traditional to abstract to the work donning the bare arms and legs of the waitresses, baristas, musicians, small businesses owners and more, Asheville certainly houses a fine collection of artistry in the world of tattoo.

Once a taboo art form found on returning war veterans in the U.S. worn as a badge of honor, it quickly spread in the early 1900s to the streets where it was found on societal ‘riff raff’, aka: the carnies and criminals. It was actually a WNC native that helped pioneer the traditional American style long before Ed Hardy or Sailor Jerry. A cotton mill child laborer, Paul Rogers was tattooed at a local carnival, ordered a tattoo kit, and decided to join the circus and ink any and everyone willing. His travels led him to the father of traditional American tattoo, Cap Coleman, and the two pioneered the field in an era when ink was taken much less lightly.

The work of these pioneer tattooists as well as the brave souls that sported their work has certainly paved the way for the abundance of artwork we see today. One local artist mentions Rogers as an inspiration to his own personal style.

“Paul Rogers – a tattooist with rock solid traditional work, carny, tumbler, expert tattoo machine builder and by all accounts the nicest guy. When he was alive – he came from around here and went out into the world of tattooing and left his mark on the development of its equipment, the look of it’s art and the idea of the kind of experienced and well rounded character a tattoo artist could be,” said local tattoo artist Shannon Schober.  “Really anyone of that era who showed that depth of character while 'being an artist', embracing a 'seeker’s spirit', possessing a wanderlust and a varied, rich, yet blue collar relationship with the arts is and has been an inspiration to me.” 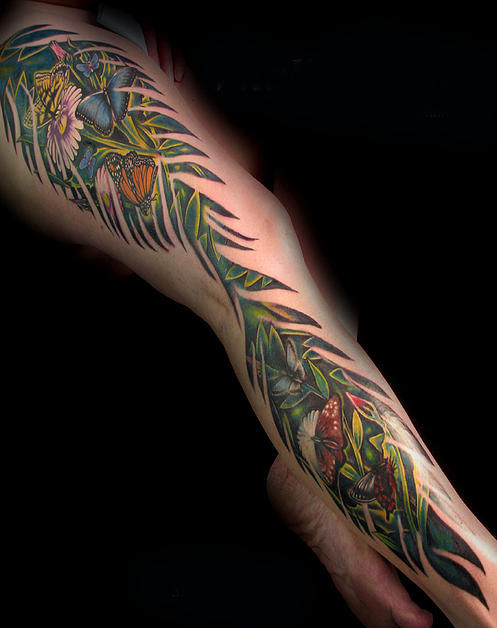 Schober’s shop, Vitality, is one that you won’t find walking the streets of downtown but rather nestled in Candler amidst acres of farmland and the expansive serene beauty of Western North Carolina. An artist in various vocations including painting, photography, and tattoo, he picked up the rebellious trade at 18 and traveled with it from his hometown in Wisconsin to various cities in the U.S., eventually landing in downtown Asheville for several years before opening his current private studio. So how does one’s path lead to becoming a tattooist and amassing enough flash to allow someone to let you near them with a loaded needle of ink that will alter your body for life?

“When I walked into Peter Poulous’ shop in Phoenix to get my first tattoo at the age of 18,” Schober recalls as the moment he felt a calling to the trade. “Gypsy Jill Jordan did it and it was just such an intoxicatingly memorable experience, It was a classic street shop, run by old school artists of an era now gone. From Peter and Jill’s personalities and appearance to the people in the waiting room, the smell of soap, alcohol, the vibe, the flash on the walls, and the fact that the idea of art was being practiced in such away…. I was hooked and knew I had to figure out a place in it.”

With friends in the business able to lend equipment, share knowledge, and offer guidance, he was able to quickly turn the euphoria of his first experience into something tangible. “Getting started was easy. Actually getting good at it was hard,” he said.  In his 24th year now as an artist, he has certainly given his work the patience and perseverance to evolve. From nature to psychology and sociology, permaculture, sexuality and the allure of the ocean as broad overarching areas of inspiration, Schober’s work offers fluid lines, beautifully executed grey-scale shading and an elegant use of negative space that uses the canvas of skin itself as a pigment.  The pieces take form in a variety of styles, depending on the subject matter, which he attributes to the inspiration of the tattooee. His best work and the pieces he shares as his trophy flash are elements found in nature —jellyfish, birds, flowers, mermaids, ocean waves and sea turtles. Alongside his work in realism and nature is a depth of design in fantasy and mythical beings including mermaids, goddesses, sorcerers, skulls, and nymphs. 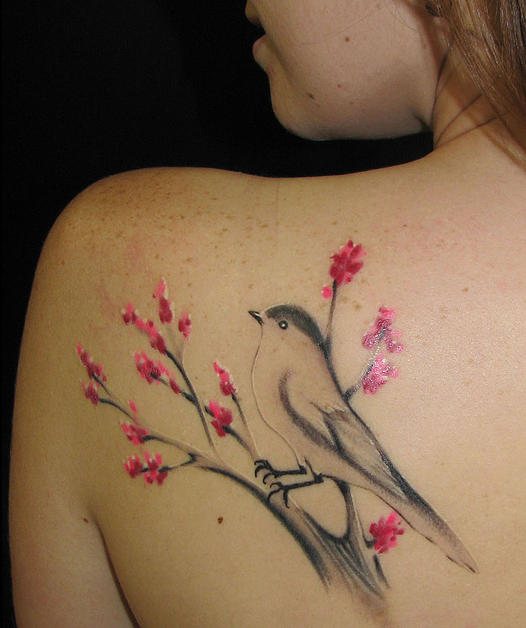 “I don’t have a preferred style really. One great thing about tattooing is constantly being pushed outside your ‘comfort zone’. Most of my favorite stuff is collaboration with the client, where the end result would not be possible without their ideas and input," he said. "Keeps it interesting."

When asked about whether he has turned someone away or denied inking an idea to life he replied, “I have, although usually not as a reflection of personal tastes or anything like that. Some reasons I may turn a piece down would be, detail vs. size considerations, extra risky placements for healing, ethical considerations – for example not putting 'career killers' on youngsters new to getting tattooed, or if a design is an outright rip off of another artists custom work.” 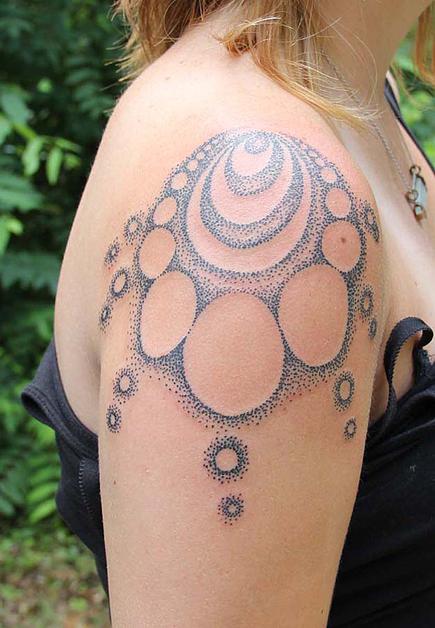 In this online age of imitation with work being pulled and shared online from a variety of sources and social sites, it’s refreshing to hear an artist that isn’t interested in recreating or mimicking an original piece and would prefer to customize (as any true artist should.) That sentiment is echoed in the tattoo world as an unspoken code of honor. The covering up of another tattooist’s work is another story entirely however. We’ve all seen a fair share of bad ink attributed to perhaps an artist’s early work or a person’s poor judgment in an interesting period in the trajectory of their life. Everyone has been tempted at least once by Friday the 13th flash, right-- $13 dagger with blood through the bicep? Maybe when you were 18 and really into Pac Man, it seemed brilliant to have that inked to your bicep and years later when you’re gaming affair wore off, the sentiment faded.

Whatever your tattoos and stories represent, there has certainly been a shift in the reasons they’re sought out, the styles being represented and the culture of tattoo in society and the subculture of the artists and shows within itself. Schober shared his take on misconceptions around tattooing, saying “I think a general attitude that tattooing begins and ends with the modern, mainstream western version of it. A lack of awareness that there is a rich cultural history of the art and the way it is experienced overall that is as important if not far more so than the current time and place. Mainstream acceptance and monetary validation is awesome however one thing that I think has been traded for it is the depth of connection to tattooing as a part of our history. A lot of older tattoo artists started when there seemed no hope of much money or acceptance from mainstream society.  The certainty of marginalizing ones self for getting or giving tattoos was a filter that really ensured a greater number of it’s proponents were more deeply enamored with tattooing as art and history and for it’s interesting (forever changing) place in society. 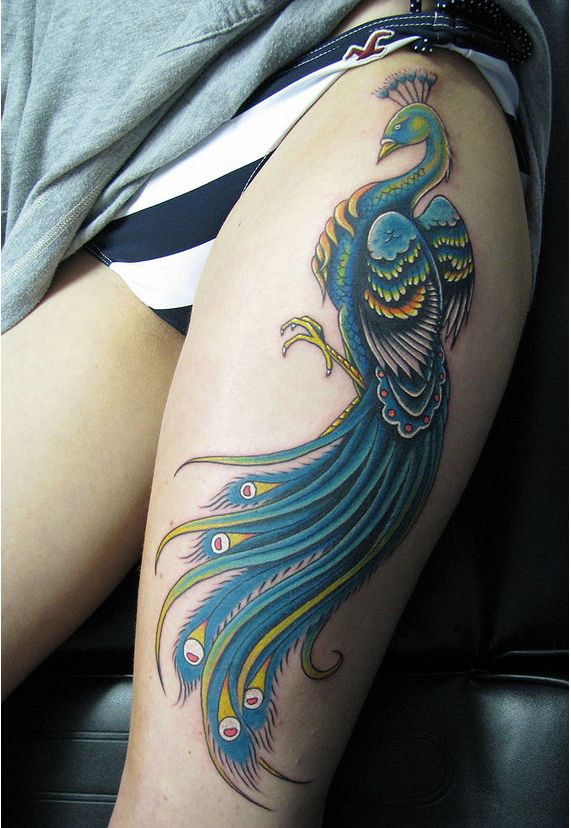 Shannon has a private studio at 210 Lower Glady Fork Rd, Candler NC 28715 where he works strictly by appointment. You can contact him at: 828-667-4344, info@shannonschober.com

For more information or to take a closer look at his work, visit his website at www.shannonschober.com