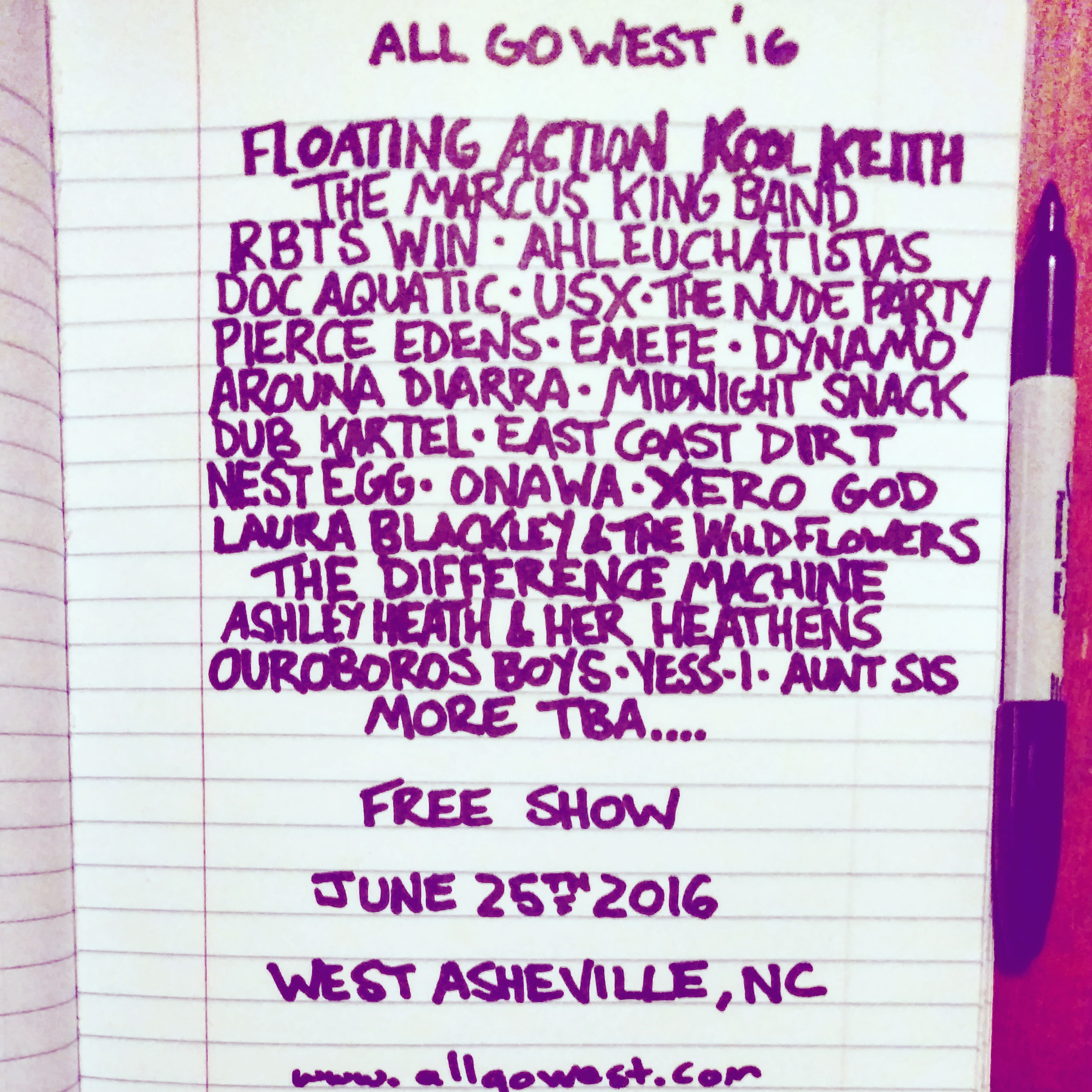 Breaking news: the stage lineups for All Go West 2016 have been announced! Now in its 5th year, All Go West highlight the local--and hyperlocal--Asheville and West Asheville music scenes, while also bringing in some amazing, groundbreaking acts to continue to build Asheville's reputation as a music destination.

All Go West happens this year from 11 am - 2 am on Saturday, June 25th. There are multiple stages which are each hosting multiple acts. The lineup literally has something for everyone. Organizer Arieh Samson has made it his goal to make the festival "an experience in music discovery on as many levels as possible." A quick glance at what's happening make it clear that he's succeeded. The headliners on each stage alone--The Digs, The Marcus King Band, Floating Action, and Kool Keith--are a testament to Samson's vision "to get music lovers in front of new artists, build community, and encourage people to push their boundaries."

There are four stages at All Go West--the Brew Pump Stage, the Outdoor Stage, the Isis Stage, and the Mothlight Stage. Shows run earlier on the first two stages and go later into the night at Isis and Mothlight, with Kool Keith playing the Mothlight's final show of the night.

The diversity of the music is one of the festival's greatest strengths. According to Samson, "We're in our fifth year, and I've established trust with the community so people know they're going to get great shows. In part this is a family-friendly experience, but there's also all sorts of other stuff, from hip hop to experimental to psychedelic." It's not only a chance to see fantastic sets, but it's also an opportunity to expand your musical horizons. There's so much great music in town, and All Go West is unique in that it will both introduce you to new favorites and remind you why you love your old ones.

All Go West is all about the music, but this year Samson is bringing in the arts as well. There will be an art crawl, the West Asheville Art Walk, that will take patrons through multiple art spaces in West Asheville including Odd's Cafe, Edelweiss Events, and West End Bakery, as well as an All Go West exhibit in the Mothlight's gallery space that will feature work by local artists.

Here's the full lineup, complete with stages and set times. We'll see you out west.

GritVegas Stage at the Brew Pump

Pisgah Brewing Stage at the Mothlight