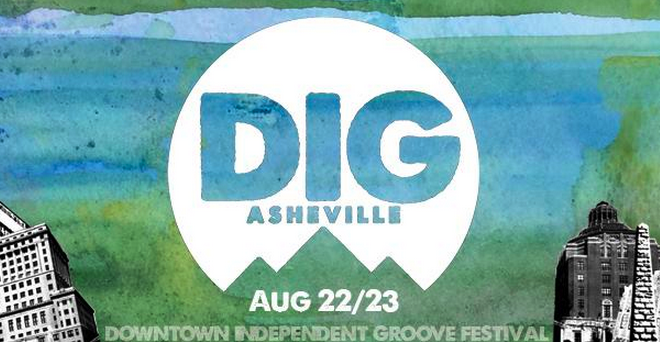 If you've ever been to The Orange Peel, chances are that the music venue's Operations Manager, Justin Ferraby, has served you a drink or two. He is also the founder of Asheville's DIG Festival making it's return the weekend of August 22-23 after a brief hiatus. I asked the also husband, father, and futbol fanatic a few questions about himself, his many hats, and what we can expect from this year's event.

AYANA DUSENBERRY: Hey Justin! How are things going? How are the festival plans coming along?

JUSTIN FERRABY: DIG is great this year. We've added a few venues, we've lost a few venues. We lost The Emerald Lounge earlier in the year and we lost the LAB for reasons out of our control but instead of talking about some of our fallen heros I'd like to tell you how excited we are to have added Wicked Weed, Tressa's, the Social Lounge deck, 5 Walnut, & Broadway's to our seasoned DIG club veterans The Orange Peel, Asheville Music Hall and The One Stop. We've also gone from 32 bands to 50 so ticket buyers get more bang for their buck. We've added a VIP ticket with access not only to all of the shows but a "Party of a Thousand Tacos" with Margaritas and our Bloody Mary party on Saturday the 23rd, both at Social Lounge.

AD: For people unfamiliar with DIG Fest, can you tell us a bit about how you came up with it and when it started?

JF: DIG Festival stands for Downtown Independent Groove. The idea came about 5 years ago when we throught about having a festival in August after the college kids come back into town. The idea at the time was a way to have a grass roots, Asheville grown festival every 6 months (Pop Asheville in the winter, DIG in the summer) and it would also be a great showcase of the music that Asheville has to offer.

We've evolved from just Americana and folk since I really want the venues to have that 'Later with Jools Holland' vibe where you have the folk band, the rock band and the Lithuanian punk band all in the same room, but they all have something that connects them in some way and makes the shows make sense. I think this gives the fan an opportunity to listen to something that they might not normally go and check out. You can take a chance on other bands at this festival which is great and something that we plan on growing.

AD: Besides starting and running DIG, you have been the Operations Manager at the Orange Peel for 8 years. What have been some of the most memorable shows you've seen there? Doesn't have to necessarily be your favorites. I want some juicy deets here...

JF: The second to last Beastie Boys show ever, 9 Smashing Pumpkins shows, Amanda Palmer running around the club naked, Jack White stopping by to do soundcheck with Queens Of The Stone Age, an M.Ward show that was so quiet you could hear a pin drop, Nick Cave playing his entire show clearly on Viagra, The Melvins requesting Nitro tanks and crash helmets to mention a few things but what I really enjoy are some of the killer openers that come through. You have low expectations in advance and some of the guys that have opened shows have just blown my mind. Fun. The Builders and The Butchers, O'Death, J.Roddy Walston and The Business.

AD: You're also a very proud dad of 2 and husband to the wonderful and talented Erika Jane of Red Honey who is one of the many bands playing DIG. I would imagine you guys talk music quite a bit. Did she help you come up with the rest of the lineup at all?

JF: The process for putting the line up began in January when I got together with the other DIG founders, Erika, Oso (Rey), and Jeff (Santiago) and our new marketing expert Robb McAdams along with a few well respected local musicians and radio personalities and we broke bread, drank wine and came up with a list of over 100 bands from Asheville and the southeast. We also put some posts out on Twitter and Facebook and we started to get alot of applications from out of town bands which is a good sign that people outside of Asheville are hearing about our humble little festival.

AD: We love our festivals here in Asheville, but we've also unfortunately seen many come and go. What do you ideally want to see happen with DIG this year and moving forward?

JF: My goal is to have over 100 bands in every nook and cranny of Asheville playing live music. I want to push the boundries, have pop up shows on top of downtown buildings. Keep people guessing. My main goal this year is to have a successful festival where people leave already looking forward to next year's DIG Fest. I wnat local bands to make great contacts and take the word of our amazing music scene to every other city in America and have people travel to our great city to support our vibrant scene.