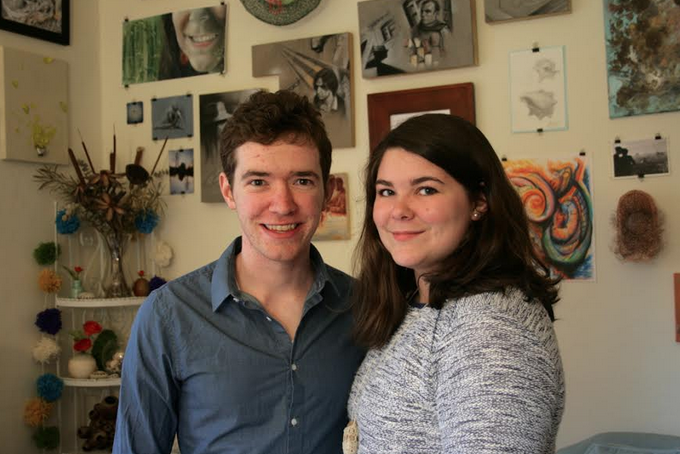 Asheville is just one of these special cities where creativity is a driving force and its artists are a huge part of its heartbeat. In my short time here, I’ve had the privilege of meeting many artists of many mediums who remind me why I love this town, and Jason Rafferty and Sally Garner are no exception.  Their excitement and love for what they do is evident throughout their work, and their relationship is as testament to the willingeness to never stop working for something you love.
Check ‘em out.
Lauryn Higgins: I understand you both met at UNCA, but how did you decide Asheville was a great fit for you?
Sally: I was in high school when I visited Asheville for the first time, with a friend. I think we were only here for a short time, and I'm not sure even why, but I fell in love with the quirkiness and knew the following year that I would be applying to UNCA, as my first choice, not only because it's a great school, but because of the city that surrounds it.
Jason: I came from Massachusetts, about a thousand miles from here. Along with looking for a liberal arts/humanities school, I was looking for a city that wasn't too big, but with a ton going on culturally. I wanted to be surrounded by a great mix of art, music, literary culture, cafes, bookstores, all that. As soon as my family came to Asheville to visit I knew it was the place.

Lauryn: When did you know art was your passion?
Sally: I have been serious about being an artist since I was about 11 years old, starting out in photography. Even when I was younger I imagined being an artist. When I was about five, I told everyone I would draw dolphins as a living. It has just always been a passion, and one that is growing the more I explore with my work.
Jason: Coming to UNCA, I was involved in drawing and painting, playing guitar and writing music, and writing lots of poetry.  Freshman year there I got a lot of encouragement from friends with the drawings I was making. I then talked to a visiting musician, Daniel Bernard Roumain, who told me to start creating art every day, and build up my business by getting the work out there to show, online and offline. Here we are about five years later, and I'm a full time artist!

Sally Garner's installation of crocheted VHS cassette tapes
Lauryn: Can you describe your style of art? Your medium, where you draw inspiration?
Sally: I graduated from UNCA's art department focused on sculpture. In the last two years there, I decided to incorporate crocheting into my assignments. After a few years of treating it only as a hobby, I began to see its potential in playing a major role in my artwork. My thesis exhibition was an installation of crocheted VHS cassette tapes (pictured above). I consider myself a fiber artist, and I’m experimenting with other techniques such as weaving and embroidery. I use recycled and new materials, as well as traditional and non-traditional fibers, from thread to plastic. Nature particularly inspires me, but my relationships with friends and family also play a large part in my work.
Jason: (*Laughs*) Oh boy. I get a ton of inspiration from classical and baroque art from Europe, and from contemporary jazz – American and Israeli – and from depth psychology like Joseph Campbell and Carl Jung. But goodness, inspiration is everywhere! I have a pantheon of heroes! Nature is endlessly inspiring. But I haven't the slightest clue as to what to call the style that comes from all that! My media for drawing are graphite, charcoal, pen and ink, and conté, and for painting it's mostly oil painting, although I've studied acrylic a bit too.

Lauryn: Do you remember the first time you met each other?
Jason: Well, we had a class together our first semester of freshman year at UNCA. We had this dinner at our professor's house towards the end of the course which related to studying the food we eat and everyone in the class was busily preparing this great meal and I was sort of just relaxing on the couch. Sally came and sat down, I asked to see her photography, which was her main artistic pursuit back then. So she showed me a bunch of her great photos and soon after we went out to a little jazz concert at Chameleon Soul Food near UNCA, now Bar of Soap.
Sally: But he also invited two of his friends, so I thought I was just there as a friend too, until he boldly grabbed my hand right out from my lap and held it in his! I was flattered, but wasn't interested in being more than friends at that point. Well, that obviously put a damper on things, and we didn't talk for a while. After summer break, when we both returned to school in August 2010, he was asking a bunch of people for someone to pose for a portrait drawing. I volunteered, but unfortunately didn't respond quickly enough. This time I wasn't going out without letting him know I really was interested, so I told him that I would have paid him for the portrait that he was offering for free. I thought his talent deserved it, and let him know that. Sometime after that we made plans to see a few concerts together and we've been dating four and a half years since.

by Jason Rafftery
Lauryn: Since living in Asheville, how do you feel you have grown as an artist?
Sally: I have been surrounded by so many great people and artists in this city; that I'm constantly inspired to grow and try new approaches to my work. I love the arts community here, and have been engaged in many different areas of the art districts. I've had internships with the Flood Gallery, Blue Spiral 1 and Black Mountain College Museum + Arts Center, and even temporarily worked at the Center for Craft, Creativity & Design. I loved all those experiences and never want to stop being a part of the "other side of art," especially here in Asheville. I really appreciate how much Asheville loves its artists. I've been lucky to meet so many great people here.
Jason: Goodness, haha! When I got here it was like "boy meets world" for my art! In Asheville, I've studied with a great locally-based artist who was classically trained in Italy – Ben Long, Nick Raynolds, Luke Allsbrook from New York City, and have apprenticed for three years with a great local landscape painter, John Mac Kah. In addition since coming to Asheville I've been to France periodically to work with some unbelievable artists and teachers at Studio Escalier. They got me really into studying baroque painting, amongst other things. I also went to UNCA for two and a half years and got a lot out of their art program in terms of creating more experimental, outside-the-box pieces. Overall it's been a big exploration of landscape, portrait, figurative, still life, and experimental cross-genre pieces since I've been here in Asheville.

Lauryn: What is your favorite thing about each other’s art?
Sally: I love how effortless it seems to be for him. He paints an under painting – and it's the most amazing thing I've ever seen. I know he actually puts all of his effort into each piece, but I'm amazed at how he always knows what he wants and just goes for it. I'm the opposite! I wish I wasn't, but I plan way too much and I am too calculating. It takes me a long time to figure out just how I want something before I start. He produces an amazing amount of work, all of which is extremely beautiful, and he is so strong with the business side. He's ambitious and ready for absolutely every part of this journey. Nothing could stop him.
Jason: I really like how restless she is with trying out new ideas, experimenting, thinking of unexpected perspectives. Since I've known her Sally has created a fantastic body of photography, including great black and white darkroom work and some experimental shots with long-expired film, and then transitioned to crochet and sculpture, where she's done everything from organic, amoeba-like crocheted wire pieces, to massive, room-filling crocheted VHS tape conceptual pieces, to tiny rocks covered with improvised spiraling patterns, to woven wall hangings and a growing line of custom jewelry, She's crazy!

Sally Garner's work
Lauryn: What are your long-term goals as an artist?
Sally: I'm very broad in my work at the moment, because I'm emerging as an artist, still figuring out exactly what I want to do, and what I want to work with. I prefer to think of short-term goals that will eventually get to the ultimate goal of being a self-sustaining artist. Being able to wake up every morning and only do what I love is a common goal, but the short-term goals will actually take me there, step by step. Right now, my goal is to explore multiple areas and find a specific artistic endeavor to focus on.
Jason: To take over the wooorrrlllldd! (evil laugh.) Well really, I am a believer in keeping your greatest ambitions sort of quiet, and "speak soft and carry a big stick" as Theodore Roosevelt liked to quote. But I will say that I want to keep being a full-time artist, to build up the business behind that, to inspire a lot of people with the art, and eventually have a workshop of some sort like the Renaissance guys did, with apprentices scurrying around and helping you create big paintings, and such.

Lauryn: Would you two ever consider collaborating on a piece?
Jason: Heck yeah! We've had a couple ideas, perhaps more along the line of a collaborative show eventually. We have this wall in our living room that appears haphazardly hung with a mingling of her wire sculpture and my drawings, but on closer inspection there are a lot of interesting similarities in the nuances of our work, even though we come from quite different influences artistically.
Sally: The collaborative show would be a great idea. I'm sure we'll eventually find our way to collaborating on a piece, but for now we're making our names as individuals.

by Jason Rafferty
Lauryn: So you know I have to ask, what is your favorite thing about Asheville?
Sally: How could anyone narrow it down!? There are a lot of quirky things about Asheville. And I do love quirky.
Jason: All the crazy creative and ambitious people that make this place hum and buzz! Asheville is like Paris in the 20's, there is this incredible innovative energy happening here, you just can feel it like a pulse!

by Jason Rafferty
Lauryn: Where can we see your work?
Sally: You can see my work at www.sallycgarner.com, as well as LoopsAndStone.etsy.com. I'm collaborating with a talented group of artists led by Daniel Sabio at the {Re}Happening on April 4, at Lake Eden to celebrate the legacy that Black Mountain College had on the arts. Also, I'll be showing my crocheted VHS piece in Lake City, SC from April 24 - May 2 for the ArtFields 2015 competition. My piece will be displayed at the Stables at The Inn at the Crossroads, a boutique hotel.
Jason: Well first thing, I have an IndieGoGo campaign that just launched! Help me study drawing in Paris this May!  You can see more of my work online at www.jasonrafferty.com. Locally I have art showing at Chestnut and the Windsor Boutique Hotel in downtown Asheville, and at the studio I work out of in the River Arts District, in the Cotton Mill Studios Building.

Another creation by Sally Garner