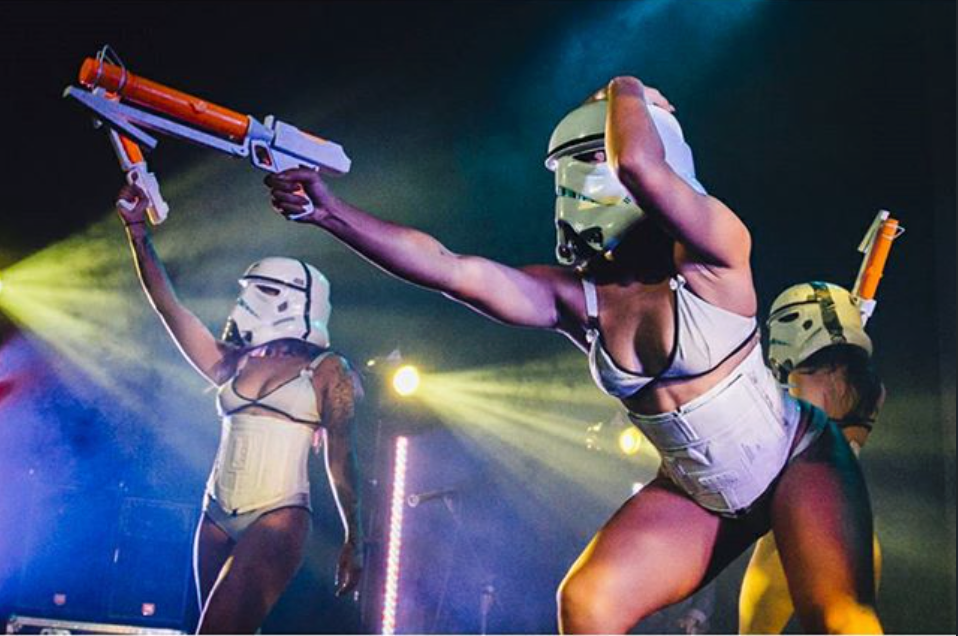 “It’s a pop culture nerdgasm,” she tells me, her surprisingly sweet, soft voice brimming with excitement. I’m speaking with Missy Suicide, founder of legendary Playboy-style alternative pinup/lifestyle magazine SuicideGirls. You know, the hot tatted and pierced chicks. At the time of its inception in 2001, SuicideGirls revolutionized the Big Breasted Blonde-saturated pinup market and turned on its head what people thought a centerfold should look like. It seems commonplace now of course, which speaks to the far-reaching power of SG’s ongoing mission.

I could probably talk to this baby girl for days, but our conversation tonight has its own mission. Blackheart Burlesque, a traveling troupe of SG dancers and models, is a side project within the greater SuicideGirls community. Missy puts it simply: “We wanted to take the sexy spirit of the pinup photos we do on the website, turn it into a live performance and update the classic burlesque style with our modern version of femininity.”

Sounds legit. And it is. Blackheart Burlesque has been around since the early days of SuicideGirls itself, and they’ve been poised daringly on the cutting edge of modern burlesque since the resurgence in the performance art’s popularity over the last 15 years.

Blackheart Burlesque is currently on a national tour of their show, a hot, hip, nerd-tastic spectacle gushing with pop culture references and satires. You want topless girls in Storm Trooper helmets? Check. Game of Thrones characters stripped down? Sexy Sailor Moon? Check and check. Hell, after the show you might even think differently about 50 Shades of Grey.

“We wanted to take these things we nerd out on and pay homage to them in a sexy, different sort of way,” Missy explains. “The thing I nerd out on is matching the music to the theme; say, a Black Keys song with Adventure Time. The Star Wars number is set to a Major Lazer song. And it just works so well!” Ah, a clever girl after my own black heart.

And it does work, because Blackheart Burlesque has continually been upping its game. “The level of burlesque performance has really escalated; the old AC/DC, leather pants striptease is not enough to wow people [anymore]. We’re executing everything at a much higher level.”

That they are. All the performers are classically trained dancers based out of LA, and for the last two years Missy has been producing the shows with world-renowned choreographer Manwe Sauls-Addison, who has worked with global pop stars like Beyoncé and Lady Gaga. This is not the janky sort of set-up that relies on feather boas and tasseled titties to get a rise out of the audience. This is the big time.

Blackheart Burlesque performs in Asheville for the first time ever tonight, October 29th, at New Mountain! With Halloween two days away, let's show these ladies how we do it here. Make them come crawling back for more.

Tickets are admittedly on the pricier side at $25-85, but Missy promises, “you can’t leave the show without a smile on your face. It’s just so, so sexy.”